ISIS Fighters Are Turning Into Malingerers To Get Out Of Combat

Among the many problems facing the Islamic State in Iraq and Syria — tons of bombs falling on their heads,... 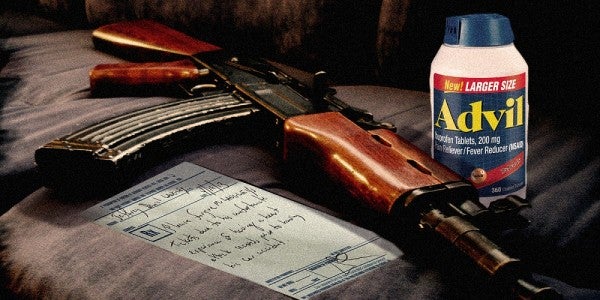 Among the many problems facing the Islamic State in Iraq and Syria — tons of bombs falling on their heads, death by special operations forces, and an international coalition hell-bent on destroying them — they’re also dealing with a real retention crisis.

It doesn’t help that a number of their foreign fighters in Mosul, Iraq, are malingerers. According to The Washington Post, ISIS fighters have been going soft in the face of the ongoing offensive there, claiming headaches, back pain, and other reasons why they can’t fight.

The Washington Post looked at a number of ISIS documents on 14 “problem” fighters with the Tariq Bin Ziyad battalion, which is made up of predominantly foreign fighters. The intel was recovered by Iraqi forces after they took over an ISIS base in Mosul in January.

According to the recovered documents, one man from Kosovo complained of a headache to get out of a fight, while a Belgian militant got out of combat by providing a doctor’s note saying he had back pain.

For some fighters, it’s not just that they want to avoid the fighting in Mosul, they want to get the hell out of Iraq.

“He doesn’t want to fight, wants to return to France,” read the notes about a 24-year-old listed as a French resident of Algerian descent, according to The Washington Post. “Claims his will is a martyrdom operation in France. Claims sick but doesn’t have a medical report.”

Foreign fighters initially flocked to ISIS in the thousands each month, but as the militant group has lost ground, its influx of new recruits has plummeted dramatically. All the while, those who already joined have come to realize that the ISIS life isn’t all it’s cracked up to be.

Today, scores of foreign fighters are dead and many others have fled. Of the more than 4,000 fighters who left the European Union for Iraq and Syria, around one-third have returned and about 14% have been confirmed dead.

The fight may not be over yet, but it is good to know that their doctors or medics never discovered the incredible healing properties of Motrin and a new pair of socks. That’s one edge the American military has over our enemies. That, and we’re not malingering cowards.