The U.S. Army is an institution steeped in tradition and respect for those that have come before. Soldiers are often... 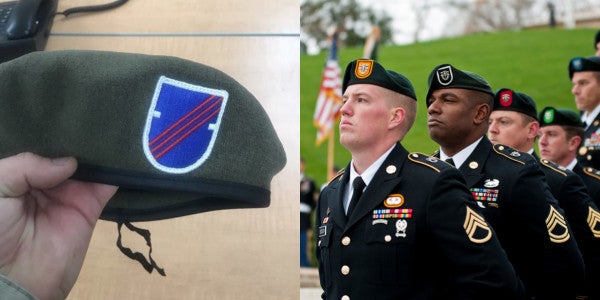 The U.S. Army is an institution steeped in tradition and respect for those that have come before. Soldiers are often required to memorize their unit’s history and the names that have brought credit to the unit in combat.

An argument over that history has ignited a social-media firestorm this weekend, as images surfaced of the olive-drab beret that will reportedly be issued to soldiers assigned to the 1st Security Force Assistance Brigade (1st SFAB). The images, surfaced by soldiersystems.net, show the SFAB’s headgear to be uncomfortably similar to the green beret worn by elite Special Forces soldiers.

The Army “has not announced any decision on heraldry for its Security Force Assistance Brigades,” service spokeswoman Cynthia O. Smith told Task and Purpose in an email Oct. 28. But multiple sources assigned to the 1st SFAB who are familiar with the issues confirmed to Task & Purpose that an olive-drab beret is planned as the official headgear of the unit; it is slated to make its first public appearance in a ceremony scheduled for November.

‘All of these decisions… came from Gen. Milley’

This is not the first time the Army has dealt with a tradition-flouting beret controversy. In 2001, all U.S. soldiers were ordered to wear a black beret by then-Army Chief of Staff Gen. Eric Shinseki. Black berets had traditionally been reserved for soldiers assigned to the 75th Ranger Regiment, and the decision brought a massive backlash from the Ranger community. (The Army modified that decision in 2011, ordering regular soldiers back to wearing patrol caps, with the beret reserved for special occasions.)

Given that history, pushback against the new olive-drab beret plan was inevitable — but the nastiness directed at some of 1st SFAB’s soldiers online has leaders concerned.

One senior NCO currently assigned to the 1st SFAB, who requested anonymity in order to speak freely, told Task and Purpose that the key decisions came from top Army leadership. “All of these decisions — beret color, patch, flash, crest, name, etc. — came from General Milley,” the NCO said, referring to Gen. Mark A. Milley, the current Army chief of staff and a Special Forces-qualified soldier who previously served in the 5th Special Forces Group.

The Army personnel who originally conceived of the new unit were all former Rangers and Special Forces, and the SFAB adopts many standards from those units, the senior NCO explained. Because of that, Milley suggested an olive-drab beret as a sort of middle ground between the Rangers’ khaki headgear and the Special Forces’ green one.

‘We aren’t here because we’re trying to be SF’

The beret controversy isn’t the only issue many veterans have with the 1st SFAB. Some within the Special Forces community were already casting a side-eye at the new unit’s patch, nickname, and mission. The patch resembles the old MACV-Recondo patch used in Vietnam by some SF soldiers; it includes a tab that initially said “Advise-Assist” until recently, when it was changed to read “Combat Advisor.”

The 1st SFAB’s adopted nickname, “The Legion,” has historically been associated with the 5th Special Forces Group.

One active-duty Special Forces NCO currently assigned to 5th Special Forces Group told Task and Purpose he was “shocked and disappointed” by the SFAB’s OD beret. “It disrespects our green berets and detracts from President Kennedy’s intent when he first approved the wear of the green beret,” he said. “This is a symbol of a legacy that has been created by the sweat and blood of thousands of men. It’s earned, not given away.”

But the NCO was especially incensed by the 1st SFAB’s nickname, which some in his unit perceived as a direct snub. “Any other [Special Forces] Group, for them to call themselves the Legion… even that would be disrespectful to 5th Group, let alone any other unit in the Army,” he said.

The mission of the 1st SFAB — to be combat advisors who assist foreign partner forces — is very similar to the long-standing core mission of Special Forces, who specialize in foreign internal defense and unconventional warfare. Because SF units have been stretched so thin since the beginning of the war on terror, other units — both conventional and special operations alike — have had to pick up the slack. It’s estimated that the United States currently has troops in as many as 138 different countries; in many cases, Special Forces in train, advise, and assist roles form the bulk of the U.S. presence. And as previously reported by Task and Purpose, Milley expects that the demand for Army advise and assist missions “will increase and not decrease” in coming years.

The 1st SFAB is meant to address the growing demand for advise and assist capabilities, but their mission is different from Special Forces’, the senior NCO told Task & Purpose. “This is a conventional unit with conventional soldiers who have been vetted” to train other conventional forces, he said. “We aren't here because we are trying to be SF. We all volunteered because we believe in the mission.”

That hasn’t deterred critics from mobilizing online. Derek Gannon, a retired Special Forces NCO, started a Change.org petition to “Stop issuance of the Green Beret to the U.S. Army 1st Security Force Assistance Brigade” after consulting with many others in the Special Forces community. The petition page, which includes the full lyrics to “The Ballad of the Green Berets,” has more than 67,000 signatures, just shy of its goal of 75,000.

Gannon told Task & Purpose that the issue was pretty cut and dried. “After reading and listening to other Green Berets discuss this issue, it seems like this is a direct rip off of our heritage,” he said. “We’re protective of the origins of our beret and the name ‘The Legion’; and it seems much of this was co-opted from the Special Forces heritage and tradition.”

The petition, he said, “was designed to unify the collective disapproval of the Special Forces community, both active and veteran,” and bring it to the attention of the Army Special Operations Command “as well as the Army at large.”

The 1st SFAB senior NCO said he understands that perspective — to a point. “People have the right to be angry, but they need to direct their anger in the right direction,” he said. “I’m just frustrated over some of the posts bashing the soldiers in our unit. The soldiers are trying to do the right thing.”

The organization “is far from perfect because we are brand new,” he added. “We are trying to get ready for this brigade’s first deployment.”

That, he said, mattered more than symbols.

“If they took away the beret, changed the patch, and changed our name,” he said, “we would still be in this unit because of the mission.”