Space may be the final frontier, but it also provides the Pentagon a new opportunity to create a really crappy... 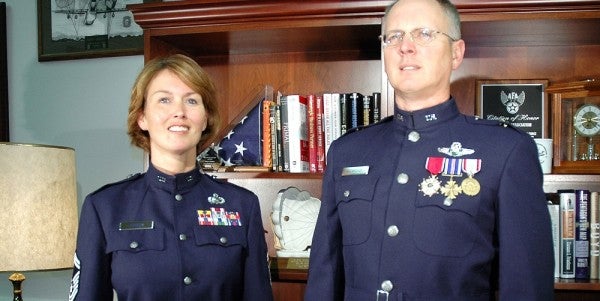 Space may be the final frontier, but it also provides the Pentagon a new opportunity to create a really crappy uniform.

While the Defense Department launched a space organization and management review on March 1, President Donald Trump on March 13 unexpectedly suggested that the U.S. military create a “space force” to protect U.S. interests in the cosmos.

“Space is a warfighting domain, just like the land, air, and sea,” Trump said in a speech at Marine Corps Air Station Miramar, Calif. “We may even have a space force … because we’re doing a tremendous amount of work in space. I said: ‘Maybe we need a new force. We’ll call it the space force.’ And I was not really serious. And then I said: ‘What a great idea! Maybe we’ll have to do that.’”

Interested in attaining the “space shuttle door gunner” MOS? Or which branches the space troopers will come from? Well, the Pentagon can’t really say until that space review wraps up in August, a defense official told Task & Purpose.

“It’s important that we have a defendable space,” Pentagon spokesman Army. Col. Rob Manning said during Monday’s weekly question-and-answer session with reporters. “Our deputy secretary of defense is actually taking a look at this. We’ll provide a recommendation. But as far as the uniform, the composition, all that …we’re taking a look at it.”

Lest you think this is a trivial issue, remember how the Special Forces community lost its mind in October when pictures emerged online showing what appeared to be a green beret for soldiers in the 1st Security Force Assistance Brigade. Ultimately, soldiers in the unit received brown berets and Army Chief of Staff Gen. Mark Milley made clear that the SFAB “is not and will not be Special Forces.”

Beyond reputational concerns, past attempts by military branches to introduce new uniforms, the product invariably looks closer to something The Evil Intergalactic Empire would field than Jedi Knight attire. Consider this 2006 picture of two airmen wearing the proposed Billy Mitchell heritage coat became an internet sensation after someone inserted Darth Vader into the photo.

Rep. Mike Rogers, R-Ala., proposed creating a space force last year, only to run into opposition from both the Pentagon and White House. Rogers, chairman of the House Armed Services Subcommittee on Strategic Forces, recently said the question of what uniform space troops should wear is a red herring.

“That’s the silliest thing in the world,” Rogers said during a Feb. 28 panel discussion at the Center for Strategic and International Studies think tank in Washington. “It’s the Air Force. Air Force got blue uniforms? Make the space corps black. Everything else be the same, except instead of having wings you’ll have an orbit or something. I don’t care. Done. It’s over.”

Whatever the Pentagon decides on uniforms, Manning said the Defense Department recognizes “the president’s enthusiasm for this vital domain. No word yet on whether the Defense Department is considering whether or not to build a “Death Star,” which it estimated in 2011 would cost $15.6 septillion and 94 cents – or roughly as much as three F-35 Joint Strike Fighters.