This Is Not How ‘Skynet’ Begins, Air Force Says of Artificial Intelligence Efforts

A top Air Force commander has assured reporters that no, the military's experiments with artificial intelligence are not the first... 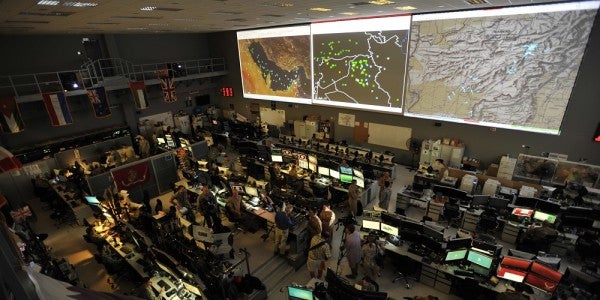 A top Air Force commander has assured reporters that no, the military's experiments with artificial intelligence are not the first step toward “Skynet,” the evil defense network in the “Terminator” movies that tried to wipe out humanity.

Google recently announced that it will not work with the Pentagon beyond its 2017 contract on Project Maven, an effort to have artificial intelligence help analyze footage from drones.

Speaking at a Defense Writers Group breakfast on Thursday morning, Air Force Gen. Mike Holmes, head of Air Combat Command, said that the purpose of Project Maven is to determine whether “machines can learn to do the things that people are doing.”

Holmes went on to explain that the Air Force does not have enough people to watch all of the full motion video taken from drones, so airmen are using so-called “learning algorithms” to teach machines what to look for in the endless footage.

“The way we’ve been doing that kind of the same way I watch 3-year-olds learn things on their iPads“,” Holmes said. “Pick all the green things. Is that green? No. Is that green? Yes. So you do the same thing with a machine.”

When machines recognize something important in the drone footage they can alert intelligence analysts, Holmes continued. Having machines do the repetitive tasks frees up people to “focus on things that people do best” and allows decision-makers to get important information quicker.

A related effort is Air Operations Center Pathfinder, in which coders and operators work together to quickly develop software that reduces the time needed to plan mission, task aircraft, and develop targets.

The Pentagon’s interest in artificial intelligence has raised concerns in Silicon Valley. Executives with Google, a subcontractor for Project Maven, said in June 7 statements that the company “would not support the use of AI for weaponized systems,” though it would continue to work with military on cybersecurity, recruitment, veterans’ healthcare and search and rescue.

Holmes said he is confident that the Air Force can continue to work with Silicon Valley to develop artificial intelligence technologies that can deter wars by making sure that enemies know that any attack against the United States is doomed to fail.

“What I would like to do is convince people that we’re all in the business of avoiding major war,” Holmes said. “That’s what we’re trying to do. We’re going to have to rely on our industrial capabilities that are on that business and AI side if we’re going to do that. So how we can work together to set a rule set so we can go forward?”

But for decades Hollywood has been warning us that artificial intelligence will inevitably go rogue. So, naturally, Task & Purpose asked Holmes directly if Project Maven is the first step toward Skynet.

“I certainly hope not,” he replied.

To ease concerns about a possible robot insurrection, Holmes pointed to the fact that, although learning machines have beat experts at chess, Go, and other games, they are far less effective without the assistance of experienced human operators.

“We’re going to have to work through as Americans our comfort level on how technologies are used and how they are applied,” Holmes said. “I understand the views of the people there. It goes into being a member of the military: I wield some pretty impressive technologies and our job is to make sure that we use them for good and in accordance with the rules that are laid out in the Constitution.”

“These are all complex issues that we’ll have to work through, but I’m not worried yet about AOC Pathfinder taking over as Skynet,” Holmes added.