The standard Meal, Ready to Eat is far from a delicacy, and even the best options need a hefty dose... 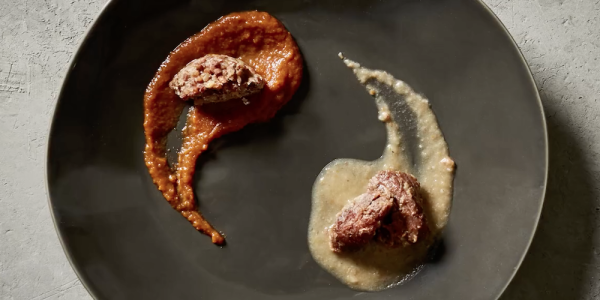 The standard Meal, Ready to Eat is far from a delicacy, and even the best options need a hefty dose of hot sauce to create a mixture that even somewhat resembles a meal. But believe it or not, all it takes is a little imagination to transform a standard-issue military meal into a mouthwatering work of culinary art.

Growing up, George munched on MREs his military father lugged home from his assignments on various military bases, and he began collecting military rations from countries around the world. For “MRE MEALS,” George decided to take the otherwise unappealing ingredients of the standard issue military ration and dress them up like the sorts of entrees you’d find in a Michelin-starred restaurant, the best in the world.

The goal, says George, was to “give the kind of reverence and elevation given to the ingredients from the kitchens he worked in.”

“We wanted to see how different Armies go about feeding their troops,” says George in the video description for “MRE Meals.” “You can tell a lot about how valued someone is by the food they are given. In respect to servicemen and women across the globe we wanted to take these meals and elevate them to Michelin Star quality meals. In essence taking some of the most unappetizing food, that’s given to the bravest people and making it look fit for the nation’s leader.”

George certainly made the MRE look like a dish fit for a king, but there’s one downside: Those things still taste like MREs. Plating is one thing, but for now, we’ll stick with the hot sauce.