The 3 Best Shooter, Strategy Games, According To A Veteran

When it comes to first-person shooters and strategy games you’re a force to be reckoned with. You’ve laid waste to... 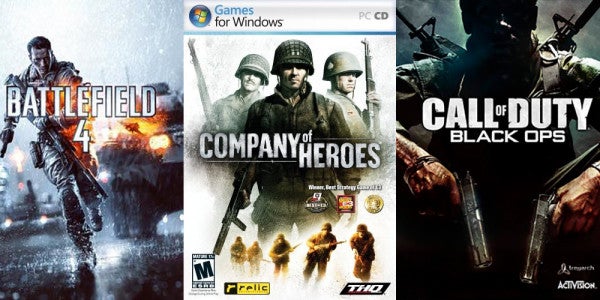 When it comes to first-person shooters and strategy games you’re a force to be reckoned with. You’ve laid waste to the enemy fire team and now you’re on a run back to your base, when suddenly you’re dead.

You’ve just gone from rampaging marauder to ragdoll, as your lifeless body somersaults through the air contorting in a laughably unrealistic fashion.

Personally, this is the moment I hurl my Xbox controller across the room, scream every obscenity I know, and generally behave like an infant. Which is why I don’t play certain games anymore.

Thanks Halo, Call of Duty: Modern Warfare, and Black Ops III. I guess physics go out the window just because you decided to add jetpacks to the mix. Oh and don’t think I forgot about you Star Wars: Battlefront. The game designers were able to add gigantic Imperial AT-AT Walkers, but allowing players to go into the prone position was just too complicated, apparently.

For anyone else who turns to first-person shooter and strategy games for some much-needed post-work release, nothing ruins your fictional battlefield bliss like crummy game mechanics. So, to save the rest of you from the same frustration, here are my top three military war games.

This war game has been fantastic since Electronic Arts released it in 2013. It feels just like its predecessor, Battlefield 3. The most recent installment changed the menu layout, added new maps, and some additional weapons, but kept the same great features: massive and small-scale engagements; destructible environments; a range of attachments and equipment; and in-game effects, like decreased vision and aiming stability due to suppression or injury.

If you’re tired of jet-pack clad snipers flying around the battlefield, or picking you off from behind a seemingly indestructible wooden crate, then it’s time for a change. There’s a reason no one camps in one spot in Battlefield, or at least not for long.

When it comes to strategy games, this one, by Relic Entertainment, is my go-to. You’re in the commander’s seat overseeing some of the most iconic and renowned battles of World War II, and like all great military leaders, your victory depends on quick thinking, decisive action, and use of the terrain. This sets Company of Heroes apart from games like StarCraft, where whoever pumps out battlecruisers or some other random doomsday unit the fastest, wins.

Your men are trapped in the open by a German machine-gun emplacement? Then call in some fire from the mortars section you have hidden from view behind a row of dilapidated buildings and send your beleaguered troops to take cover in the abandoned church nearby.

When I’m tired of being mocked over the mic and called a noob by pre-pubescent gamer nerds, Treyarch’s Black Ops is my default comfort game. Which is really sad when you think about it.

You play Alex Mason, a Cold War-era spy whom every Tom Clancy character secretly aspires to be. Between massive shootouts with Viet Cong irregulars in ‘Nam, to leading prison uprisings in a Russian gulag, and disturbing bouts of psychosis and schizophrenia, the campaign is addicting, and the story continues in Black Ops II.

The gritty and unforgiving missions, distinctly different levels, and excellent plot makes the campaign feel more like a video-game version of “Apocalypse Now” than a first-person shooter.