If you’ve been following recent gaming buzz with a mix of excitement, little bit of frustration (you know what you... 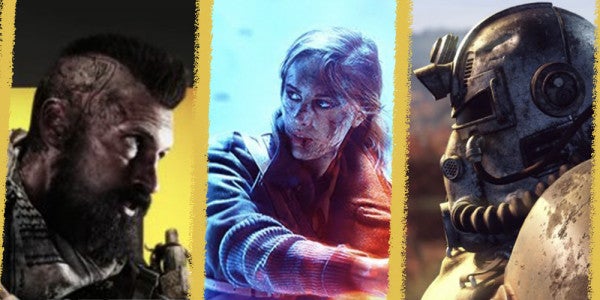 If you’ve been following recent gaming buzz with a mix of excitement, little bit of frustration (you know what you did, Activision), and some general confusion, it’s okay: You’re not alone.

With this year’s E3 wrapped up, and a number of new console games in the works, Task & Purpose’s preeminent vet-gamer nerds, Brad Howard and James Clark, have some thoughts on Call of Duty: Black Ops 4, Battlefield V, and Fallout 76. Here’s what we do and don’t to see when these three franchises drop their new installments in the fall.

BH: I can’t wait to nuke people I don’t know, destroying their settlements just to ruin the hours they spent making them. I have zero interest in crafting or gathering wasteland berries. I just want to become the violent raider that the post-apocalypse needs, nay, deserves. I think the one thing I didn’t like about Fallout 3 and Fallout 4, was that no matter how evil or powerful you became, at the end of the day you’re just playing in a sandbox by yourself.

JC: You troll. Honestly though, my only real gripe is that they’re taking it online. I dunno about the rest of you, but I don’t settle down on my couch with the intention of marauding a post-apocalyptic wasteland because I’m a social person. I do it because I want an escape from the ass-hattery of the internet, and the not-so-social interaction that comes with it.

BH: I hate everything about this game. Battlefield 1 was a kinda-sorta ok Battlefield. Battlefield 4 is the shining beacon on a hill that I look at when I think of what a Battlefield game should be. It should be equal parts serious and silly, with the serious coming from the tech and maps, and the silliness from the weird shit players try to pull off. The Battlefield V trailer looked like some weird steampunk World War 2/Mad Max rip off. I think I groaned after about one minute of watching when someone was being beaten with a cricket bat. Battlefield is an arcade style shooter, but come on, like does it have to turn into Fortnite? Anyways I think I’ll just play BF4 until DICE comes to their senses and puts out a proper Battlefield Bad Company 3.

JC: Alright, alright, look, I get it, when it comes to first-person shooters, a lot of people are over World War II. It’s been done, but, c’est la vie, we’re going back to Germany, and probably Africa and the Pacific given Electronic Arts’ planned (free-to-play!) expansions. So, let’s focus on the good, and there’s a lot of potential here.

With Battlefield V, the franchise is bringing some interesting changes to the class system, like the ability to customize the four main loadouts (assault, support, recon, and medic) with unique abilities, and skill trees. Plus, the newest Battlefield installment is upping the ante on gameplay mechanics: There’s new movement options, like a reverse prone for those frenetic button-mashy gunfights; you can drag downed buddies to safety; reinforce barricades and toss up sandbags to fortify a position; we get towable artillery; after-shock effects following an explosion; and the ability for any class, not just medics, to resuscitate downed squadmates. All of these additions have the potential to dramatically change how you play.

BH: I haven’t played a Call of Duty game since Modern Warfare 2, and I have no intention of playing this one. Why? Because I am a adult and I pay taxes. Which means I want more from my game than 360 no-scopes and six year olds talking about my mother incessantly.

JC: I wish Treyarch would stick to its strengths. Call of Duty was once the undisputed king of the close quarters FPS, but they seem to have abandoned the best parts of it — frantic matches have become claustrophobic and repetitive, and they haven’t expanded their perk or attachment system in a major way. Instead, they added classes, the weapons and their attachments are largely unchanged, and that’s led the recent additions to the franchise to feel a bit stale and worn.