We may earn revenue from the products available on this page and participate in affiliate programs.For many, the holidays are... 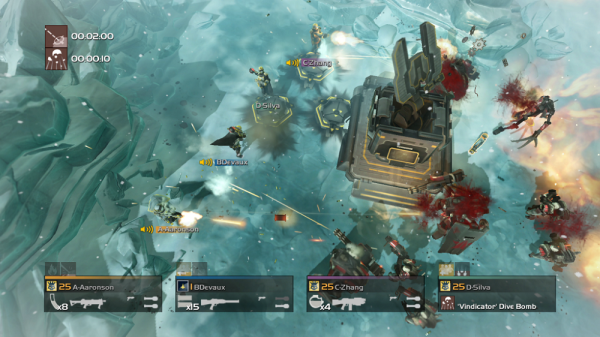 For many, the holidays are a chance to rejoice in the company of loved ones and reflect on the events of the year. But for some, it’s a magical time when the weather sours, friends head out of town to visit family, and the only thing to do on a long weekend is batten down the hatches, plant yourself firmly on the couch, and get ready to pwn some n00bs.

Whether you’re playing your favorite first-person shooter with buddies, or crawling around on the floor trying to find the batteries that popped out of the controller after you tossed your sticks across the room because some kid no-scoped you for the last kill of the game, unwinding with some computer generated carnage can offer a much-needed outlet after a long day's work.

The holiday season is no different. In fact, those long weekends courtesy of federal holidays might be one of the few opportunities we still have as adults to rot our brains for hours on end and escape from an ever-expanding list of responsibilities: Nah, I’m busy winning World War II single-handed, the dishes can wait. So can groceries, I have Dominos on speed dial, and this tank won’t drive itself.

If any of that sounds like how you’d prefer to spend a long weekend this December, then we’ve got a few recommendations for your holiday wish list this year.

While there’s no shortage of new games and systems, from Red Dead Redemption 2, to trips down memory lane with the Nintendo Entertainment System — and yes, yes, PUBG and Fortnite, I know, it’s what all the cool kids are doing, that and eating Tide Pods — this list is limited to those console and PC games we’ve taken to binge-playing here at Task & Purpose.

Set in a satirical future, Helldivers is pretty much Starship troopers (the movie, not the book), but instead of being a 90s space opera, it’s a top-down co-op shooter. As a Helldiver your mission is to travel the known star system, see exciting lands, meet new people, and spread “managed democracy” across the galaxy, which really just means you'll be slaying legions of aliens. Would you like to know more?

Available on PlayStation 3 and 4, as well as PC, Helldivers is light-hearted — the menu screen has a rolling news feed with bizarre dystopic headlines — and offers an addictive and twitchy style of play, and a progression system that makes those hours annihilating bugs and cyborgs with your trusty space age blaster or giant robot all the more worthwhile.

Fair warning to all would-be Helldivers, though: You will most certainly die at least once per game, and probably because of friendly fire. That’s actually part of the game’s charm, so much so that at the end of a match I find myself applauding my teammates for not killing me by dropping a bomb, or a drop pod, on my head.

It’s time to ship out to World War II, again. DICE’s much-anticipated return to the Second World War hasn’t been entirely smooth. The game debuted last month and brought with it a bunch of bugs and minor technical issues, which we discussed in a recent review. But glitchiness aside, Battlefield V is addictive and offers a host of new game mechanics — from the ability to create fortifications, to how they overhauled running and diving into the prone position.

On the whole, BFV is an easy game to play casually. You can log on for a round of Grand Operations — a series of three or four matches where the outcome of one impacts the next — then log out when you’re done, making it a come and go as you please shooter that delivers on the total war we’ve come to expect, while not demanding a huge time commitment from players in order to enjoy all it has to offer.

If frenetic spray and pray is more your style — or you’re just tired of getting sniped from half the map away in Battlefield — then Activision's latest installment in their flagship shooter will do the trick. Black Ops 4 is classic Call of Duty, but with a few new gimmicks and tweaks to make the game feel new, while still familiar.

Some of the new additions include new characters with innate abilities; and no more passive healing — you need to use a first aid pack instead; the ability to fight, which means threats come from every direction, including the shallows below. And of course, there’s plenty of perks, new score streaks, and attachments like operator mods which significantly change how some weapons work.

Sure, Ubisoft's open world sandbox may have come out in March, but the fact that I’m still playing Far Cry 5 speaks to just how fun and engrossing this game is. Like every installment in the franchise, the most recent Far Cry melds FPS gameplay with open-world exploration, colorful characters, gallows humor, and a riveting storyline: in this version, you’re a rookie deputy tasked with arresting a lunatic cult leader, but you end up leading a one-man insurgency against a bunch of religious extremists in fictional Hope County, Montanna.

As Task & Purpose noted previously, the storyline for Far Cry 5 feels like the fever dream of a liberal arts student who thinks that all of middle America is just one downed cell tower away from total chaos. Additionally, the game has launched a number of expansions and mini-games — including one set during the Vietnam war, and in which you have to use stealth rather than brute force, to survive.