Slice, dice, and experience history with the Ka-Bar Ek Model 4. 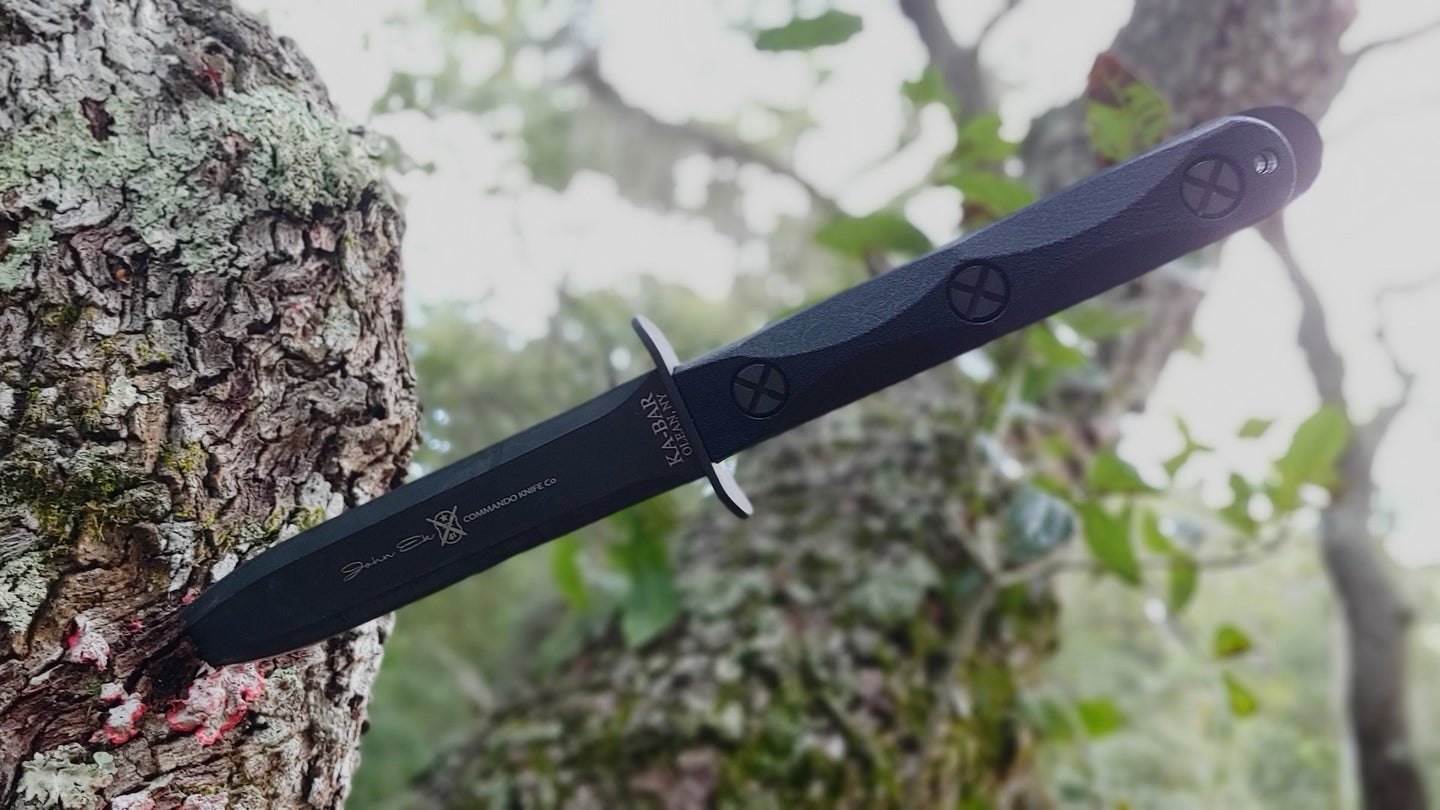 The Ek Commando Knife Company sprang to life in 1941, the same year the United States entered World War II. The founder, John Ek, had been making knives since 1939, and he entered the Commando knife company, predicting a need for combat knives as war raged across the world. By 1943, Ek was producing six styles of knives, and he had three shifts operating 24 hours a day, seven days a week. During the war, Ek insisted hia knives only be sold to servicemen overseas. He wanted his knives in the hands of the men who’d use them as intended. The most popular of the Ek knives was the Ek Model 4.

The U.S. War Production Board approved Ek’s design and allowed John Ek to continue to receive the steel necessary to produce the knives. The Model 4 was never an officially issued knife like the Ka-Bar, but it became a popular choice for private purchase. The ownership of the company has changed hands over time, and current owner Ka-Bar has revived the brand with modern, affordable interpretations of the classic Ek knives.

The Ek Model 4 wears a double edge blade in the traditional dagger design. The blade extends 6.625 inches from the hilt and provides a blade long enough to reach the internal organ regardless of the angle it penetrates someone’s torso. Ek popularized true full-tang knives that utilize a single piece of steel to form the blade and handle, and he wisely believed that a full tang made his knife stronger. A set of grips were installed on the knife’s handle, and over time they have alternated in materials: Ek originally used rock maple grips, but the modern Ek Model 4 uses glass-filled nylon. Between the grips and the blade sits a crossguard to keep your hand from riding up on the blade.

The Ek Model 4 became a favorite of the Marine Raiders as they hopped through the Pacific campaign. Gen. George S. Patton carried one, as did Clark Gable, and one sat on the desk of President Franklin Roosevelt. The Ek Model 4 has since served as an individually purchased knife in World War II, Korea, Vietnam, the Gulf War, and Operations OIF and OEF. Here’s what we like about it.

The Ek Model 4 came in a nice cardboard box, declaring it an Ek Commando knife from Ka-Bar. Inside, we have the big knife and its rather modern sheath. No leather here, just a polymer sheath with a nylon belt attachment. It is a very nice sheath that utilizes both active and passive retention. The active retention comes in the form of a sealed thong that wraps around the handle. The passive retention comes in the form of a friction fit sheath that holds the blade tightly in place. Removing it takes a dedicated tug, and it won’t just accidentally fall out.

Once I freed the blade from the sheath, I observed the dark-coated blade with the John Ek signature and the Commando Knife company name and logo. It’s a fine-looking knife that resembles a spearhead. Ka-Bar’s iteration uses 1095 Cro-Van steel, which isn’t a bad choice to keep the knife relatively affordable and to provide a good blade. This steel will rust, and the coating Ka-Bar applies is useful to prevent that. It’s a very tough and hard steel, but not too tough to sharpen. It can get quite sharp and seems to hold that edge extremely well.

The Ek Model 4 looks and feels impressive upon first impression. The grip is quite long at 6 inches. The knife’s total length adds up to 12.625 inches. The Ek Model 4 is a big boy and weighs 11.2 ounces. The blade is 1.125 inches wide and .154 inches thick. It’s a handle-heavy knife that feels like it has some chop to it. The glass-filled nylon grip utilizes a scalloped design for a sure grip.

John Ek designed these grips before aggressively-textured G-10 ruled the roost. The scalloped design ensured the blade stayed put when in use, even with wet hands. In fact, when questioned how well these grips worked, he reportedly stabbed the wood floor as hard as he could and displayed that his hands didn’t slip.

How we tested the Ka-Bar Ek Model 4

How do you test a commando knife? Since we beat the Nazis, it seems tough to test the Ek Model 4 as intended by John Ek. Yet, I must persevere. The big blade and hefty weight behind the thing make it feel like it can chop, so I chopped.

I try to mix yard work with gear testing as much as possible. I deal with the rising tide of palmettos, and the best way to remove them is with fire, second-best a machete, and third-best, the Ek Model 4. I chopped at them like they were chicken and I was making fajitas. The heft of the knife with the sharp blade made it well-suited for the destruction of palmettos.

Continuing my yark work theme, I sliced through plenty of long hanging vines, and the knife beat its way through both thickets and individual vines. I used it to dig a bit, almost like a trowel, to remove sand spurs. It’s not a great task for a dagger, but we succeeded in our mission. As you’d imagine, my hands got nice and sweaty working in Florida’s summer heat. I never noticed my hand slipping as I worked, and the grips seemed well-suited. I wanted to replicate John’s test of the grips, but I did it a bit more cautiously. I wore gloves and stabbed the knife as hard as I could into a tree. My hand didn’t move, and those scalloped grips proved quite successful.

Beyond yard work, I cleaned the knife up and used it for a little food prep. Cutting through onions, tomatoes, and bell peppers proved easy. What really opened my eyes was cutting through meat. I slowly smoked a rather large roast, and when it came time to eat, I used the Ek Model 4 as the serving knife. As my wife rolled her eyes, I slid the blade through the roast and got a small sense of exhilaration. Holy crap, can this thin cut meat. The Ek Model 4 glided through that roast with ease. I swapped sides and used both blades to cut perfectly cooked medium-rare slabs of meat onto plates.

Once everyone was eating, and I was out of the judgemental eyes of non-knife nerds, I stabbed what remained of that poor roast right in the center. The blade slipped through perfectly. Again I got that exhilarating feeling of a quality knife doing quality knife things. The knife slid out of the roast with ease as well. I could see why it could be quickly used to defeat the enemies of democracy.

The grips are absolutely fantastic. They keep the knife in your hand in most conditions. John Ek’s scalloped grip design is novel but effective. The grip’s large size also allows it to be easily swung, and it can work as a slicer and a chopper.

Ka-Bar’s use of 1095 Cro-Van steel presents users with a fantastic steel that doesn’t cost an arm and a leg. It’s not necessarily premium-grade steel, but it’s a working man’s steel. It’s easy to sharpen while remaining extremely strong and hard.

The big, long blade has a very nice and even grind to either side. It passes the eyeball test easily enough. It cuts extremely well through a wide variety of materials. Ka-Bar sends this thing nice and sharp from the factory.

Ka-Bar’s modern sheath is a nice touch. I like the retention features and the modern combination of polymer and nylon. Leather will always be cool, but sometimes effective and cool are two different things.

A Commando knife is specifically designed for fighting, and as far as I can tell in my limited use, it would be a very capable fighting knife.

A double-sided dagger made for killing the enemies of peace, democracy, and America doesn’t lend itself well to field versatility. A knife’s a knife for sure, but the dagger-like design works best for removing sentries and not for general survival tasks.

The Ek Model 4 can be used to chop, slice, and cut, but it won’t excel at most tasks outside of fighting. The double-sided blade doesn’t present a good blade for cleaning wild game. It has no serrations for chopping through thick materials and won’t excel at most bushcraft tasks.

The classic Ka-Bar, for example, works as a fighting knife, as well as a shovel, a hammer, a game skinner, and more. To be completely fair, the EK Model 4 wasn’t intended for mundane tasks, and it was intended to be a fighting knife.

The Ka-Bar Ek Model 4 delivers a worthy successor to the classic Ek Model 4. It’s a knife that allows you to experience the historical Ek design, and since it’s an actual historical example, you won’t feel bad putting in work with it.

FAQs about the Ka-Bar Ek Model 4

Q: How much does the Ka-Bar Ek Model 4 cost?

A: States and localities may have laws dictating what can be owned and carried. California does outright prohibit the ownership of daggers. Always check local laws to be sure.

Q: Can the handles be removed?

A: Yes, a simple set of fasteners holds them in place. They can be removed or tightened with minimal tools in the field.

A: Right here in the good old US of A.