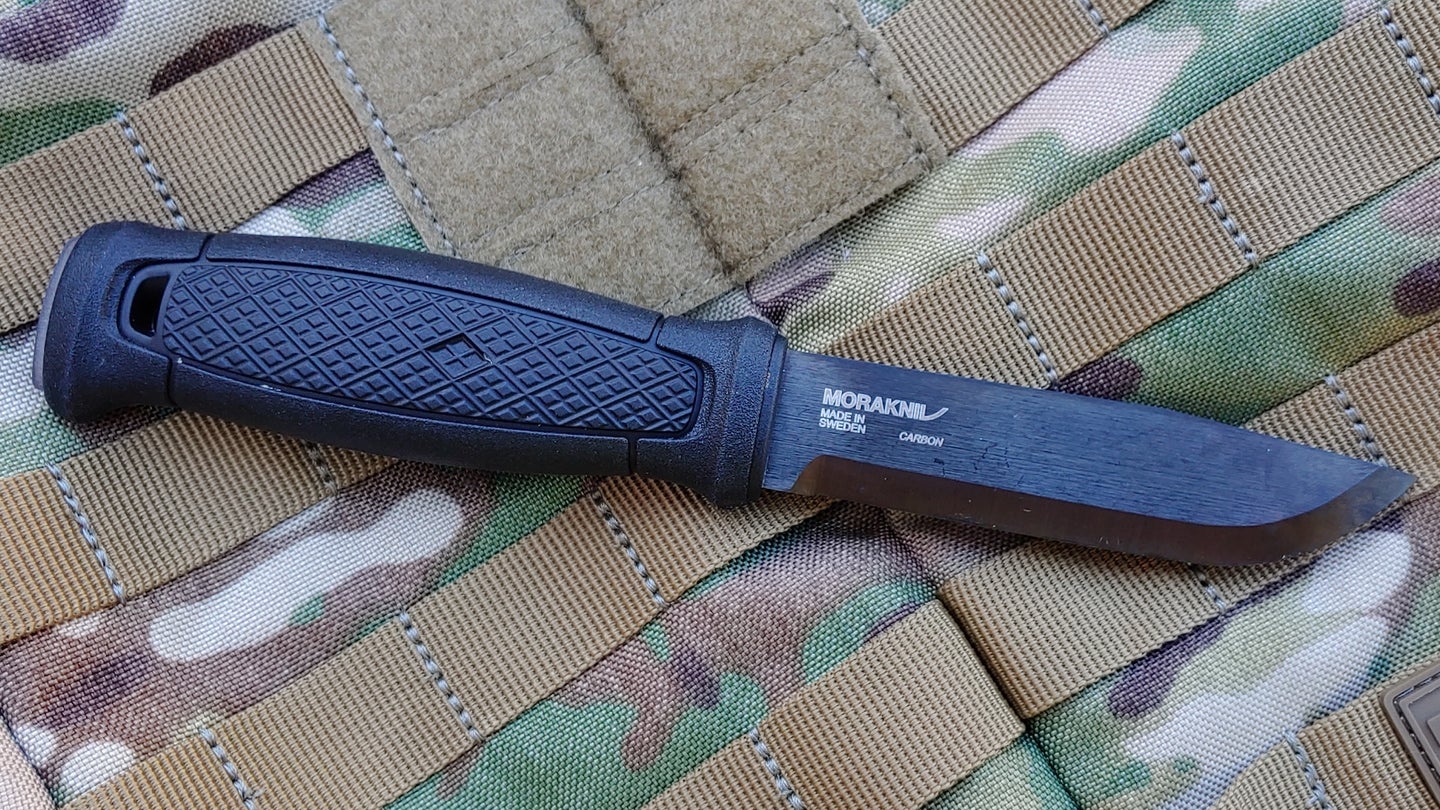 Mora is a locality in Sweden, and according to Morakniv, knives have been produced there for more than 400 years. It must be something in the water, I guess. Morakniv has been molding steel into knives since 1891. Mora takes trees and turns them into timber, work that requires a variety of sharp objects. Knives acted as a means to an end for a timber village that’s somewhat isolated by the necessity of vast forests.

The knives produced in Mora by a man named Frost-Erik Erson eventually went viral — sort of. The original knives were designed and built in-house not as a product to be sold, but as tools to help produce Erson’s main product, timber sledges. However, the knives became popular among the Mora locals, and traveling farmers and craftsmen spread the blades throughout Sweden — and then throughout Europe. By 1900, Erson was producing knives exclusively and exporting them worldwide.

Even though they’ve been at it well over a century, the Morakniv Garberg was the first knife that the company produced sporting a full tang, which means it’s one piece of steel from the tip of the blade down to the bottom of the handle. A one-piece blade design ensures you have a rigid knife that’s extremely strong and made to take some serious abuse, and full tang blades are standard on most serious-use survival, fieldcraft, and fighting knives. The Garberg, it seems, is the knife we always wanted Morakniv to produce.

Since the Garberg was made for hard work, I used that to guide my review. Overall, the Garberg is a general-purpose fixed blade knife well suited for a wide variety of tasks. It can be a survival knife, a hunting knife, or a general bang-around tool for times when a folding knife simply doesn’t do it.

Morakniv goes with humble packaging, and the Garberg arrived in a simple grey box with a picture of the knife on it. Inside was the knife itself, packed away inside of a polymer sheath. The multi-mount sheath secures the knife with a leather button-sealed thong, and the blade sits deep into the sheath.

Popping the knife out revealed the Carbon or C blade. This glossy black blade is admittedly eye-catching: this is the Diamond Like Coating, or DLC, finish. Like a self-tanned bodybuilder, the glossy finish outlines the blade, draws your eyes to the curves, and shows off the blade’s geometry.

The polymer handle gently curves with a well-rounded shape to it. It sports a diamond texture and both a glass-breaking/skull-cracking end piece and a lanyard loop. Overall, it’s a simple but attractive knife of moderate size.

The Garberg sports a 4.25-inch blade and a 4.75-inch handle for an overall length of 9 inches. At 5.98 ounces, we have a lightweight knife that’s guaranteed not to challenge your belt.

How we tested the Morakniv Garberg

The Garberg sells itself as a simple but durable knife designed for heavy field use. As such, I took it to the field and gave it a quick rundown of the various tasks it should be able to accomplish.

The blade would be the first victim, and I took it to task against rope, cardboard, and some of northwest Florida’s thicket. The state isn’t all beaches and sunshine, and my area is more swamp and jungle than white sand and blue water. This isn’t a machete, but I used it as such to clear out some areas around my home. It’s spring, so snakes will be moving in, and I needed to clear out some of the kid’s play areas anyway.

I cut through juvenile oak trees, tons of palmettos, vines, and the general nastiness of the Florida thicket. The Garberg comes from the factory with an exceptionally sharp blade that slides right through materials both thick and thin, textile and natural. The Garberg’s blade features a healthy belly that gives you a long cutting edge that makes the knife remarkably efficient.

People love the simplicity and efficiency of Moraknivs and part of that is the scandi grind they use to turn steel into blades. End users will have little issues sharpening the knife, and the broad scandi grind and simple blade geometry make it a quick and painless affair. Honing an edge back on the Garberg takes no time at all.

As I cut, I grew to appreciate that big healthy handle. The rounded nature combined with the polymer grip created an ergonomic design that was free of hot spots and pain.

The rear of the Garberg’s blade is very flat, and this serves a purpose. First and foremost, it makes striking a fire stick easy. The edge generated by the flat rear side of the blade makes it simple to throw sparks from a Ferro rod. The second purpose is to make it easy to use the Garberg to baton wood. I did just that and split some small logs with just a little fight.

Throughout all this testing, the blade’s finish never flaked or failed and remained just as glossy as it has since it was first unboxed. Also, I only sharpened it for testing purposes. After hours of heavy use over several days, the blade was still sharp enough for working purposes.

The full tang design allows the Garberg specifically and Morakniv in general to join the ranks of knives tough enough for the most haphazard of users. The DLC coating provides a notably strong finish to the carbon steel blade and is rather attractive to the eye, while the Sandvik 14C28N stainless steel makes for an ultra-sharp blade that seems to hold its edge for a good while.

I love the tactile feeling of a sharp blade sliding through whatever I’m cutting with little effort. Be it rope or chicken breast for my world-famous fajitas the Garberg provides that feeling. It’s a feeling only high-quality knives deliver.

The blade design allows it to be an efficient cutter with lots of potential for skinning game, cleaning fish, survival tasks, or even clearing the backyard from snake hidey holes. The handle ergonomics are spot on and provide a comfortable grip for work that requires either finesse or brutality. It’s well designed and very comfortable for rough and tough use.

I’m a huge fan of the simplicity to the whole thing. A lot of the knife world clings to ultra-aggressive designs, tanto blades, serrations and more that make maintaining the knife more difficult. I like having only a single edge to sharpen and to hone. The DLC finish adds a layer of protection that means I don’t worry much about corrosion.

Sharpening isn’t difficult either. I like plug-and-play things with little drama to them. As far as knives go the Garberg is as close to plug and play as you can get.

The sheath really eats up the knife. It doesn’t just envelope the blade, but most of the handle. I can barely get a grip on the knife to draw it. My thumb and pointer finger are all that fits on the handle to draw the blade. You can’t do it quickly and safely, and you’ll have to readjust your grip as you draw your knife.

I would prefer the blade to have a bit of jimping at the rear of the blade for thumb placement. In my experience, jimping provides a better degree of control for super fine cuts. Additionally, the diamond texture could be expanded to the front and rear of the handle for better traction in more extreme situations.

The Morakniv Garberg is an outstanding knife that is remarkably simple. If you want something more subtle than the ultra-aggressive knives you find in American manufacturing, then the Garberg might be for you. It’s quite light, very ergonomic, and provides you with a very capable knife for a wide variety of tasks.

Mora also makes a survival kit that attaches to the Garberg’s sheath (It also attaches to the Kansbol knife sheath as well). The survival kit consists of three parts: a 60mm long ferrocerium fire steel rod, an 18.5-inch reflective paracord lanyard, and a polymer fire steel mount with an integrated diamond knife sharpener that click-locks (permanently) to the knife’s sheath. The steel is long enough to be used easily, has a polymer handle to maintain grip, and really kicks off a lot of 5,400 F sparks. I’ve read it is good for about 7,000 strikes. This stuff is magic for starting fires in wet conditions. I’m not such a fan of the reflective paracord lanyard for the fire steel.  The steel clicks into place securely on its own and takes some effort to remove. I don’t like things dangling off of my body that inevitably catch on brush and annoyingly snag. Tacticool folks will most likely automatically ditch the lanyard because of its reflectivity when they are hiding at night. From who, nobody knows. The survival kit is a well-designed and convenient add-on and retails for $31.99, but you can find it here for $26.99.

Q. How much does the Morakniv Garberg cost?

A. The Morakniv Garberg costs right around $90, although prices can vary slightly depending on the options available.

A. A scandi grind is a flat blade grind that’s easy to sharpen on a whetstone. It’s perfect for skinning game and butchering animals.

Q. Can I use different sheaths with the Morakniv Garberg?

A. Morakniv offers a leather and polymer sheath for the Garberg for those seeking more traditional carry methods.

Q. What’s the difference between the S and C models of the Morakniv Garberg?

A. C stands for Carbon steel and S for stainless steel. The different blade materials offer different resistances and strengths.