It's the years, honey, not the mileage. 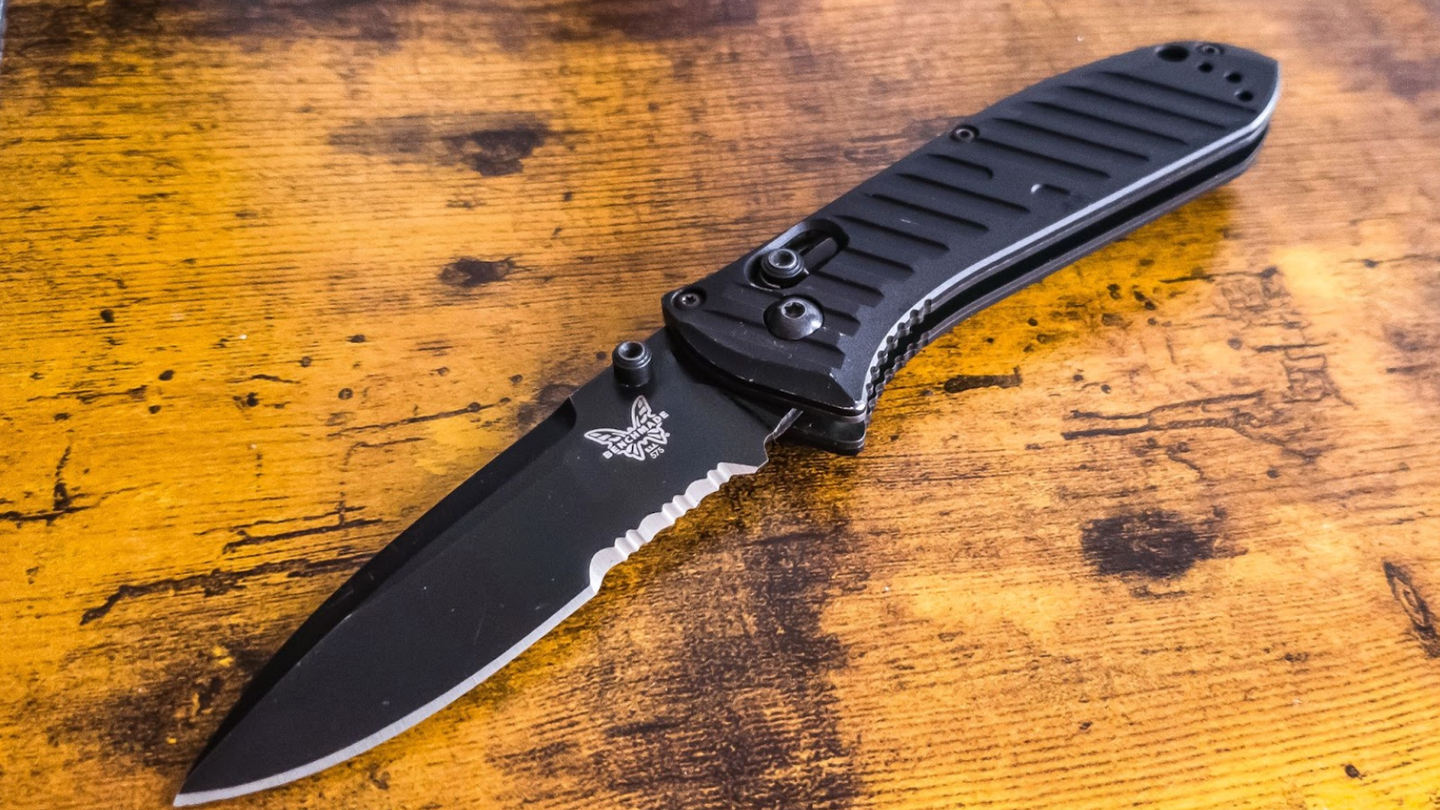 Benchmade has firmly established itself as the best-marketed knife company around since the late 1970s, starting as a manufacturer of balisong- or butterfly-style knives and skyrocketing to fame as the tactical knife company of choice for the bougie U.S. service member with a fresh paycheck and for whom Gerber or CRKT just won’t cut it.

The Presidio line has been one of the company’s most popular tactical folders, and in 2018 I opted for the Benchmade Mini Presidio II over the ubiquitous Griptilian due to its appearance, durability, and superior (at the time) construction, having better blade steel and a full liner compared to the Griptilian. The Presidio is part of Benchmade’s black-boxed “Professional” line and, at the time of purchase, featured a full liner, CPM S30V blade steel, and 6061 Aluminum grip scales. The newer versions lack partial serration and come with carbon fiber reinforced polymer grip scales instead of aluminum. I personally selected this particular variant, with a partial serration and a black blade, for the purposes of cutting line and resisting corrosion. Additionally, it features a full liner for added durability and has an overall more “tactical” appearance than other folders at the low end of Benchmade’s price catalog.

Editor’s note: the Benchmade Mini Presidio II also made Task & Purpose’s roundup of the best folding knives of the year.

I paid $136 from an authorized dealer for my Benchmade Mini Presidio II, and for the past three years, it’s been one of my favorite pocket knives to carry, both in the field and around town. Here’s why it may be your next blade of choice.

The Benchmade Mini Presidio II, as a member of the “Professional” line of the company’s catalog, comes in a plain, foam-lined black paper box with a microfiber bag and the warranty information cards. Simple packaging, but I generally view dollars saved on packaging as dollars spent on product — hopefully. The knife itself is compact while still being handy, coming in at just over 4 inches closed and a hair under 7.5 fully extended. The scales provide ample grip purchase, and the pocket clip is close enough to the grip scales to not protrude when in use. The knife itself weighs a pleasantly hefty 4 ounces, with the current CF Elite-scaled version weighing in at 3.2 ounces.

In terms of appearance, the knife itself looks very well-finished. After three years of use, you’ll likely get wear on the pocket clip, on the front and rear of the knife body, and on the operation surfaces like the thumb stud and lock. However, the structure itself is sound, with the machining on the aluminum grips precisely beveled, the paint consistent, and the grind of the edge even, which is not always the case with Benchmade.

How we tested the Benchmade Mini Presidio II

Over the course of three years of ownership, I carried this knife in situations ranging from professional kitchen work to outdoor usage to everyday U.S. military use in garrison and in the field. I used it to cut everything from rope to sticks to meat, and of course, hundreds of MRE bags. This knife has helped me free myself from tangled line, hastily take down camouflage netting to avoid an oncoming forest fire, and shave kindling to get a much smaller fire going. It’s been there, and it’s done that.

During this period of usage, the knife has experienced no fewer than three pocket clip breaks, at least 10 full takedowns for cleaning, scratches, chips on the edge, and lost paint. I generally only needed to send it in for sharpening once or twice per year due in no small part to the choice of blade steel and the heat treatment put on the blade. And while this is by no means an exhaustive torture test that involves things like testing the knife to failure, it does show that the blade is capable of performing in moderate-usage environments both indoor and out.

What we like about the Benchmade Mini Presidio II

Overall, the Benchmade Mini Presidio II is a solid option for anyone in search of a reliable folder. The knife has an aggressively tactical yet refined appearance, owing to the precise finishing, machined aluminum grips, and the contrast of the bright edge against the black coating on the blade.

Another solid point in its favor is the knife’s construction, specifically the its superb blade steel which keeps an edge without being rust-prone, its full liner, and its sturdy grip scales. There’s also the famously secure “Axis Lock” opening mechanism: the knife opens and closes smoothly thanks to the lock, which also keeps the blade securely in place when fully extended to prevent it from folding on you during strenuous use. This is further aided by the ambidextrous opening stud, locking mechanism, and reversible pocket clip for all the wrong-handed users out there.

What we don’t like about the Benchmade Mini Presidio II

Benchmade pocket clips have always broken for me way easier than other brands, even less expensive ones, due to the fact that they’re made of simple bent steel. Thankfully, Benchmade is hasty to replace them, but this shouldn’t be a thing, since I’m hardly the first one to notice this.

This quality control issue extends to their factory edges, which are frankly not good and are often flat-out dull compared to what a skilled knife sharpener could do with an hour and a KME sharpener. But that’s extra money that you have to spend either learning to sharpen knives yourself, or sending them to a professional. If you’re going to seriously use a Benchmade knife, add the price of sharpening and strop to the price of any knife you purchase, because although the build quality is generally good, the edges aren’t. As a matter of personal preference, the newer models have swapped the aluminum grip scales for carbon fiber reinforced plastic ones, which while lighter, don’t have the same metallic heft as the second generation one that I have.

Q. How much does the Benchmade Mini Presidio II cost?

A. The Benchmade website prices the Mini Presidio II at $150, but that’s MSRP, and most authorized dealers will average around $136 before any discounts.

A. CPM-S30V is “Crucible Particle Metallurgy” steel, which is a process that takes advantage of modern technology to yield a much purer steel that has improved hardness and corrosion resistance properties. Many consider it to be the best all-rounder steel for knives.

Q. What is CF-Elite?

A. CF-Elite is a polymer supported by a carbon fiber skeleton for improved durability while also offering a much lighter weight than similarly strong materials.

A. That’s not a question. And while I agree, that sounds a lot like you’re the sort of person who thinks the M14 was the best service rifle of all time, that the 1911 is God’s handgun, and that intermediate cartridges are a passing fad. In short: OK, boomer.

Related: How to sharpen a knife without losing a finger