A knife and a half from Leatherman. 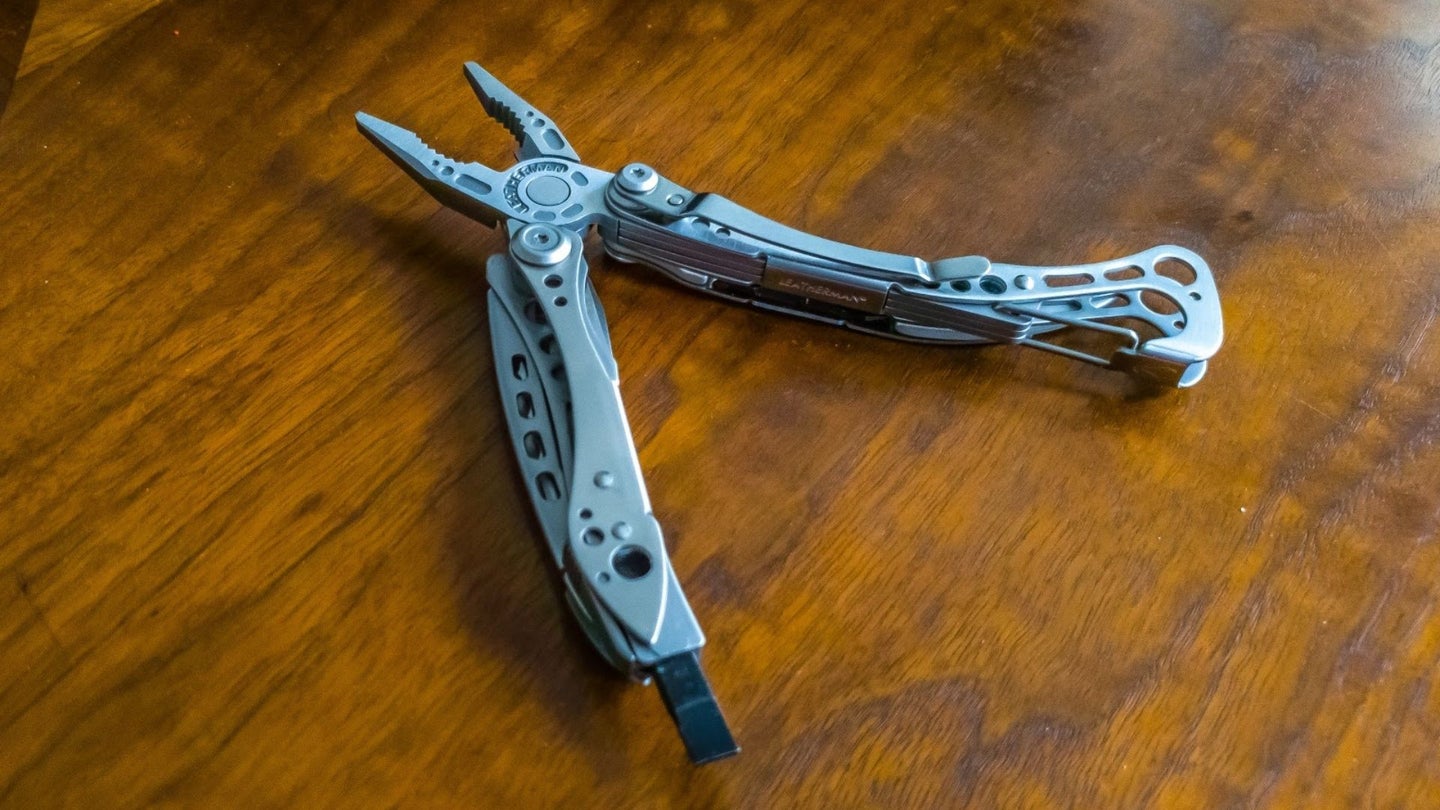 Leatherman is one of those companies whose reputation very few people will dispute. They’re arguably the brand in quality multitools, and their products have faithfully served people in all walks of life. Some offerings, like the MUT, are specifically military-oriented, while others like the Bond, are simple, traditional, and no-frills multi-tools. But one thing that Leatherman has always struggled with is targeting a more casual audience, and in particular targeting people who carry a pocket knife over a multitool.

To address this, the company had to overcome two major hurdles. First, most Leatherman tools are difficult to open, requiring two hands and some elbow grease to access most of the tools. Second, carrying a Leatherman in a pocket is difficult because it’s a heavy metal object with no pocket clip, which means that you either dig in your pocket for your multitool or you wear a belt pouch like you’re the dad at the unit BBQ with the phone holster, braided leather belt, and tucked in t-shirt.

Editor’s note: the Leatherman Skeletool also made Task & Purpose’s roundup of the best multitools of the year.

The Leatherman Skeletool addresses both of these challenges by making the knife immediately accessible and usable with one hand and, in a seemingly self-evident moment of clarity, adding a pocket clip to the outside of the tool to circumvent the usually-included belt pouch (If you must have the belt pouch though, they sell an option that comes with one). Full disclosure: this Leatherman was provided to me free of charge, and as always, though this won’t affect my opinion of the item in question, I value transparency.

The Skeletool comes in a very striking yellow cardboard tray, which features a plastic insert for the tool itself, a card explaining the basic operation of a Leatherman multitool, all contained in a gray paper sleeve, featuring the bright yellow Leatherman logo on the front. The Skeletool is totally unaccompanied in the package apart from the card and comes closed with all parts attached, making it a tool you can just take out of the box and use as it is.

The Skeletool is simple, with every tool fulfilling multiple purposes to save on space, and features the four most popular tools that you’ll find on a Leatherman, which are the pliers, knife, screwdriver, and bottle opener. The entire tool is made of stainless steel, with the exception of the screwdriver heads and the knife blade, the latter of which is 420HC. Folded, the Skeletool features a carabiner clip that doubles as the bottle opener, readily available at one end of the body, which means that you don’t have to open it to access the most important tool at the aforementioned unit BBQ.

The liner lock knife is similarly readily available on the side of the Skeletool, allowing you to open it separately from the rest of the tool as easily as pushing it open like any other unassisted knife.

The blade is a partially serrated reverse tanto style and features a large hole for you to use when opening the blade. The body features multiple “lightening cuts” that are more for looks, since the pliers make up a considerable amount of the manageable five-ounce weight, along with the steel plates used to fill in the spaces in the grips where there are no tools. Opening the Skeletool to pliers configuration exposes combination pliers that feature a combination of needle nose and standard pliers, as well as standard and hard-wire cutters.

Finally, the pocket clip is screwed onto the outside of the tool, allowing handy storage without a need for special pouches. However, this pocket clip is placed in such a way that it makes quickly deploying the knife awkward, being on the opposite side from where it would normally be on a pocket knife, and in the opposite orientation.

How we tested the Leatherman Skeletool

The obvious first test for the knife was my usual hair shaving and paper slicing, which the knife easily passed, gliding through paper ranging from receipts to cardstock, and shaving hair to the degree that it could be used to shave the entirety of the back of my hand. The blade also whittles chunks out of soft plastic, soap, zip-ties, plastic bags, and wood with no difficulty, and the lock holds well throughout these normal activities. The serrated portion of this blade easily cuts 550 cord and sawed through a stick, which is about all you’ll be using a serrated portion of a blade of this size for. This is due to the choice of blade steel, but also the fact that the edge is evenly-ground, and doesn’t feature any noticeable micro-chips or blade deviation.

To test corrosion, I left the multitool outside on my rooftop catwalk overnight during a warm rainstorm, and then let it sit for an entire day. The blade developed spots of rust due to being a high-carbon steel, but those came off easily with some ballistol and a toothbrush.

The pliers easily loosened and tightened various bolts, and were handy when changing the battery on my truck. Additionally, one side of the plier arms is longer than the other, allowing me a surface to get leverage while grabbing a bolt or cutting wires. The wire cutter attachments do exactly what the package says, and cut through copper speaker wires handily. The screwdrivers work well on their respective screw types, despite their flat profile, and as mentioned above, fit neatly into their slot for storage when not in use. The bottle opener opened a bottle of beer to help me get through this article, so that’s a pass with flying colors.

Finally, carrying the Skeletool around for days on end, despite having a greater bulk than most pocketknives, is no more noticeable in-pocket and carries very comfortably. The blade is carried tip-down, which means that to open it when drawing it from the pocket, you have to flip the tool over to actually use the knife.

This is a Leatherman for people who would consider a full-size Leatherman to be a little too much, or who want a pocket knife that has a few more features than just a knife, while still being usable with one hand. The Skeletool does away with tools that the average person never uses, like leather gouges, files, and can openers to prioritize the tools that fix everyday problems, be they opening packages, tightening screws, or cracking open a cold drink. The fit and finish on this is exceptional when you consider the price tag, and the tools all perform exactly how I’d expect them to, with some like the knife punching above their weight. This is an easy way to comfortably carry more tools than just a knife, while making the total package comfortable enough for everyday carry.

The pocket clip placement is awkward, especially someone who prefers to be able to pull a knife out of my pocket and immediately be in position to unfold the blade. Additionally, while using the pliers, the screwdriver head in the base of the handle digs into my finger, which is uncomfortable. Despite being made of 420HC, the blade exhibited slightly more corrosion than I’d expect from a steel of this type, even as mild as it was. Finally, the plier action is very stiff right out of the box, which can make it difficult to use without some break-in.

The tests on this one were more limited than on my previous outings with the Benchmade Presidio and Ontario Knife Company RAT-3, simply due to the intended purpose of the Skeletool vs heavy-use tactical or field knives. While the Skeletool would not be completely out of its league in a professional environment, I would definitely want a dedicated knife and a full-size multitool, and at that point, I would carry a full-size Leatherman.

That said, this is a must-buy for someone who wants the ideal marriage between a traditional multitool and a knife. The price is right, and it fills a niche that very few other companies are trying to address. It’s not the tool for someone who needs a load of full-size tools and a multitool that does everything, but it streamlines the most popular tools for most people. Two thumbs up on this one.

FAQs about the Leatherman Skeletool

Q: How much does the Leatherman Skeletool cost?

A: The Leatherman Skeletool sells for around $64.95 on Amazon

A: 420HC steel is a higher-carbon variant of 420-series steel that allows for higher hardness at the expense of some corrosion resistance. With a good heat treat, 420HC can retain a very good edge that’s also easy to sharpen with traditional sharpening products. Overall the 420 series is softer than the common 440 series, but the high carbon content allows companies like Buck Knives to really dial in the heat treat and achieve very sharp and reliable knives.

A: No, but they do offer a 25 year warranty that covers the original owner, should the tool fail under “reasonable use.” While that sounds subjective, I’m sure as long as you don’t deliberately abuse the Skeletool with torture tests, you should be within bounds.

A: “Bro like, they don’t test every sample, you’ll be fine.”