Review: the Buck 371 Stockman is a concrete cowboy’s EDC knife

Buck’s entry-level Stockman knife is a great choice for casual everyday carry, but a bit lacking for power users. 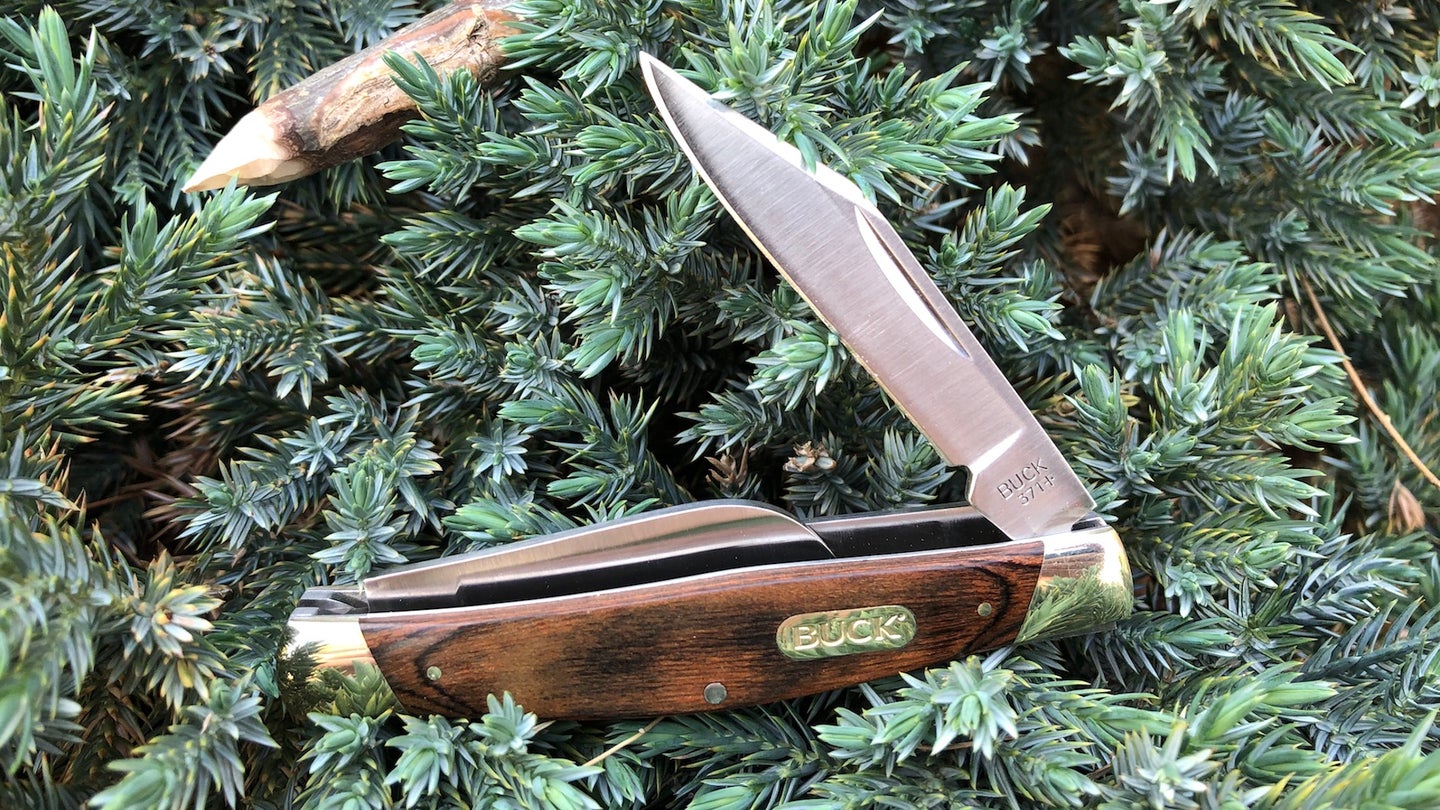 For years, I’ve been on the hunt for the perfect EDC pocket knife, something that looks good, feels right, and gets the job done, whether it be big or small. I’ve tried all kinds of blades from the hefty Buck 110 to the lightweight Gerber Paraframe to a variety of miniature knives from a number of different manufacturers. So when I stumbled across Buck’s 371 Stockman, I knew I had to give it a try. It looked a bit heavier than a Paraframe, but its aesthetics and proven Buck pedigree cemented my need to get my hands on it.

Drawing on a long tradition of American folding knives, the 371 evokes the spirit of the American West with both its name and its design. While the 110 may be the hip knife of choice, I’d bet an x-ray scan of jean pockets across the fruited plains might reveal a large number of Stockman-patterned knives. I’d also be willing to bet that a majority of them bear the Buck name whether the 371 or its fancier brother, the 301.

After a couple of weeks toting the 371 Stockman around, I finally got a chance to see whether or not this blade would live up to my expectations. Here’s what I found.

I received the Buck 371 Stockman in the mail along with a few other items to review. Upon opening the shipping box, I found a neat, crisp paperboard box covered in black and yellow and emblazoned with the Buck Knives logo. Like Buck’s knives, the packaging was simple and low-cost, yet instilled confidence in the blade it contained.

The knife itself looks amazing. The nickel bolsters and matching logo plate blend together very nicely with the laminate wood scales with virtually no tangible indication of where the two materials meet. The rest of the knife consists of steel, and each of the three blades is built with 420J2 stainless steel.

The largest of the trio is a 2.75-inch modified clip point blade, while the sheepsfoot and spey blades both come in at an even two inches long. All three blades use a non-locking, slip joint mechanism to secure them into place, and the stainless steel springs provide a satisfying snap both when opening and closing each blade.

As far as first impressions go, it was love at first sight. I have a special place in my heart for wood-handled Buck Knives, and this little folder hit me hard with its sleek lines and classic aesthetic. Add in a sharp factory edge, and this thing went straight from the box to my pocket, minus one long stop while my eyes soaked in every line and curve.

How we tested the Buck 371 Stockman

Once the Buck 371 Stockman made it to my pocket, it stayed there for a good two weeks while I put it through its everyday carry paces. Except, it didn’t stay: Every so often, I removed it just to stare at it, and other times, I used it the way an EDC knife should be used.

Straight out of the box, I compared the 371 Stockman to my DRET-sharpened Buck 110. Before doing anything else with the 371, I did a sharpness test on a sheet of paper which showed that the trio of blades came with a nicely-sharpened factory edge. During my paper tests, I taped off my 110 at the two-inch and 2.75-inch marks in order to match the blade lengths of the 371’s different blades. Then, I cut the same piece of paper three times with the 110 and the 371’s corresponding blades right next to the 110’s cut. I made each cut with light pressure, pulling with each slice and relying on the blade’s weight to continue momentum until the paper stopped its progress. A pulling stroke with light pressure turned in a half-inch cut compared to the 110’s 5/8-inch incision.

After carrying it for a while, I decided to take it out (again) and see how it held up to some tougher use. I collected some dry Aspen sticks from my backyard, then tried my hand at some basic woodworking. I fashioned a couple of sticks into stakes that wouldn’t hold a tent up in a drizzle. My military-grade tent stakes may have been made with soft Aspen wood, but they provided plenty of opportunity to test the 420J2 steel’s ability to hold an edge in a simple camping, survival, or similar situation.

I also decided to turn up the heat on the 371 at a family picnic. Instead of relying on a traditional butane lighter, I decided to whip out an old Coghlan’s Magnesium Fire Starter I had in my pack to light up a heap of lighter-soaked coals on the grill. Due to limited working space and my limited proficiency with the Coghlan’s striker, the 371’s sheepsfoot blade got more than its fair share of swipes, collecting a bit of soot, metal shavings, and discoloration in the process. Most of it wiped off fairly easily, but the carbon deposits near the edge needed a little extra attention from my fingernail to restore the factory shine.

To round things out, I used my handy Smith’s DRET to see how easily the 371 Stockman’s blades would retake their edges. After a large handful of swipes down the DRET’s diamond-encrusted surface, I met and surpassed the original factory edge. Once I was finished, I ran another paper test using the same sheet of paper and the same light blade pressures. My testing generated cuts measuring 7/8 of an inch, a quarter-inch improvement over the factory edge.

When it comes to looks and feel, Buck’s 371 is magnifique. I love the traditional aesthetic, and Buck’s attention to detail on the fit and finish are first rate, especially when it comes to knives in this price range. (I can only imagine how much more I’d like the rosewood and brass combination on Buck’s 301 Stockman.) The size and weight combination are perfect as well, giving the knife an excellent feel in my hand.

This Stockman is also easy to carry. Most pocket knives and multitools tend to be too long, too short, or too bulky. The big ones feel like a brick or a full set of Craftsman tools, while the small ones disappear so well that your heart stops beating until you can verify that, no, it didn’t fall out of your pocket in the elementary school parking lot.

For the price, I’m happy with the 371’s blades. For as long as I can remember, Buck has had a reputation for selling blades with a very good level of sharpness from the factory, and the 371 Stockman failed to disappoint. The 420J2 stainless steel is also very easy to sharpen.

There is very little I dislike about the Buck 371 Stockman, but the blade steel is something that did lose points in my eyes. Blade HQ classifies 400 series steel as a budget material, and Knife Informer lists 420J as a low-end steel as opposed to the lower mid-range classification awarded to the common 420HC steel. The 371 Stockman uses 420J2, and I must agree with these classifications in terms of edge retention. While it excels in virtually every other category of steel virtues (toughness, corrosion resistance, ease of sharpening, etc.), I discovered that anyone who relies heavily on their knife will either want to keep a sharpener handy or spring the extra cash for a higher-quality steel.

Beyond the use of a low-end steel, my only complaints have more to do with the Stockman design than Buck’s 371 specifically. Compared to modern EDC knives, the 371 is a little heavy, although I personally found the extra weight comforting and reassuring. Similarly, both of Buck’s Stockman models (the 371 and 301) lack a pocket clip, but again, I had no issue with this, as I prefer to keep my Streamlight ProTac closer to hand than my EDC utility knife.

Overall, I love the 371 Stockman. I found it to be a great EDC knife for new, casual, or office dwelling everyday carry practitioners. It is very affordable, easy to use, and looks amazing. On the flip side, it’s less than ideal for heavy-duty use.

Would I buy one? If I had the cash, I’d probably opt for the 301 instead, but if I was gifted the 371 or had to stick to a tight budget, I certainly would not complain about slipping this Stockman into my pocket, so long as I had a reliable sharpener handy.

FAQs about the Buck 371 Stockman

Q. How much does the Buck 371 Stockman cost?

Q. What is a Stockman knife?

A. Today, the Stockman pattern makes for a very good EDC knife, but this knife is also a frequent companion of cowboys, farmers, and others who work with livestock. The Stockman is a slip joint (i.e., non-locking) knife that features three medium-sized blades, a clip point, a sheepsfoot, and a spey, each with its own unique role.

Q. What is a sheepsfoot blade good for?

A. A sheepsfoot blade allows users to safely trim or cut near delicate tissue or fragile materials, while minimizing the possibility of unwanted punctures with the tip. Originally, it was used to trim the hooves of sheep and other livestock.

Q. What is a spey blade used for?

A. Today, a spey blade is primarily used as a versatile EDC blade, although modern cowboys and others still use them for their original purpose: harvesting Rocky Mountain oysters.

Q. What is the difference between the Buck 371 Stockman and 301 Stockman knives?

Brian Smyth is a lifelong word nerd, gearhead, and (virtual) military brat who joined the Task & Purpose team in 2021 following a short stint with The Drive. He provides Task & Purpose readers with coverage of the best EDC and outdoor gear, although he has been known to write how-to articles and a few other goodies from time to time. Contact the author here.