Review: the CRKT Overland wants to take you off-road as a 4×4 in knife form

Can the CRKT Overland overwhelm suspicions of budget friendly knives? 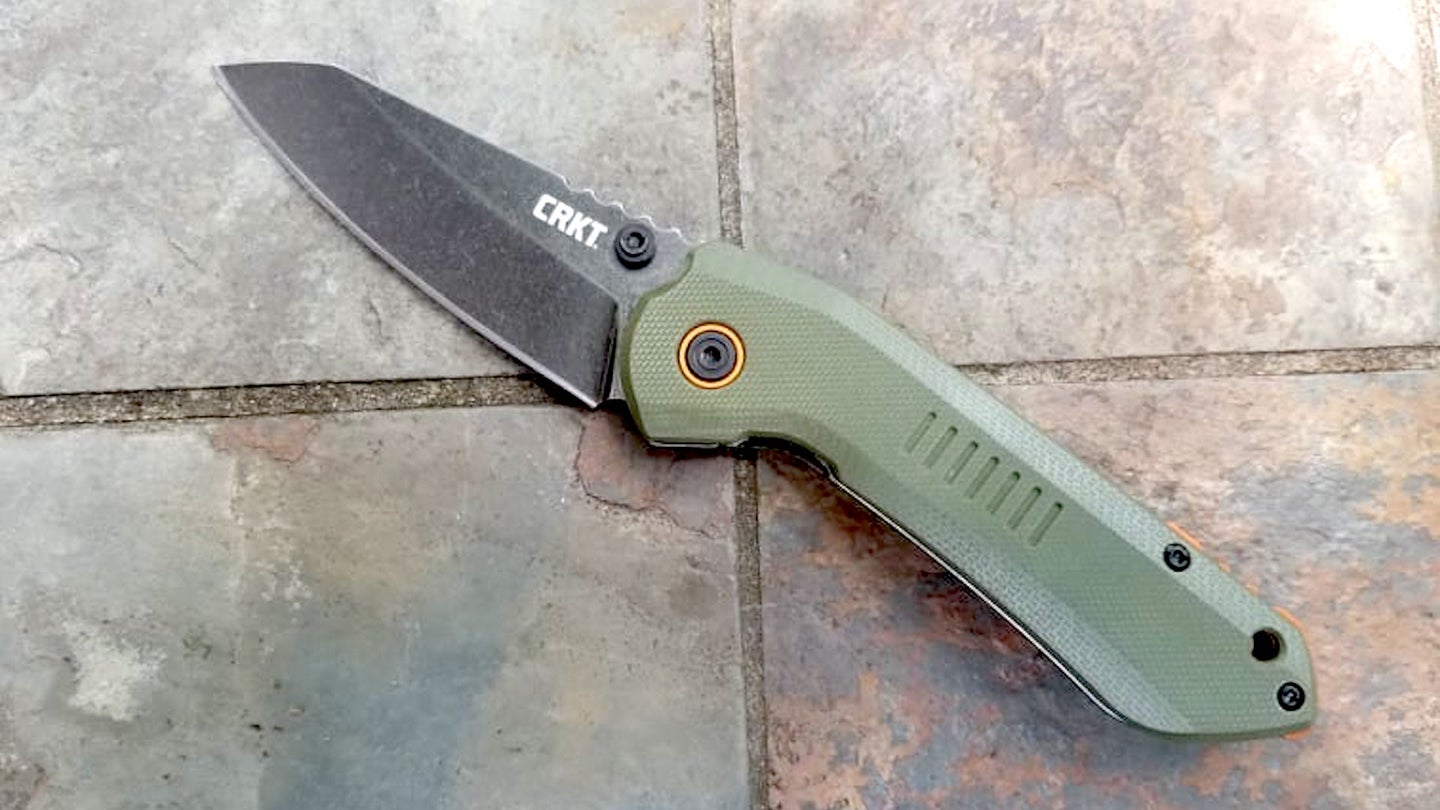 I’ve been craving a worthy folding knife since I left the Air Force years ago. Back in the days when I was part of an airbase defense squadron, I had a Benchmade Auto Stryker-style knife, which was as coveted as it was questionably legal to keep as a civilian. It was awesome, but I surrendered it when I left, and I’ve never had a replacement that I loved quite as much.

Fast forward to today, and I’m now a frugal dad who also enjoys quality gear. I’ve got a son about to enter sixth grade, and with summer vacation almost done, we’re looking to do our first real camping trip. That prompted me to assess our outdoor kit and I decided that we needed some upgrades. One of the first things was to look at acquiring a new knife. I’ve found that, with the multitude of EDC knives offered these days, it is a little intimidating trying to pick a new pocket knife. It’s hard to commit to a new one because who wants to get stuck with a knife that you don’t love?

Right now I have the trusty Buck 110, which is just wonderful. It feels great, it’s a solid piece of craftsmanship, and will likely last forever. But since I lost the sheath in a move long ago, it’s a little heavy and bulky in my pocket. You may ask, why not buy a new sheath instead of a new knife, Mr. Frugal? I’m just kidding. You’re reading a knife review. You wouldn’t ask me that.

Anyway, back on point. My wife has a TACOPS Personal Rescue Tool (PRT), which is small, light, and has a great blade (when she was an Air Force medic, she got a lot of cool gear). I wanted something like that, but not as expensive. I started looking for knives under $100 that I could trust will last more than a couple of years.

Enter the CRKT Overland, a mid-range pocket knife the costs just shy of $70. I’ve read good things about this knife, and although it lacks the seat belt cutter of the PRT, it promised to be lighter and easier to carry around than the Buck 110, so I thought I’d give it a shot. I wasn’t disappointed.

The Overland comes wrapped in a plain plastic bag, set in a small, green, and not particularly noteworthy cardboard box. Beneath the knife is a printed insert with directions on caring for the blade, and an advertisement for CRKT’s “keyring emergency tool,” which is a $10 seatbelt cutter. Well, well, well. So far it looks like I’m on the right track.

The knife itself looks and feels great. Weighing in at 3.6 oz, it’s half the weight of my Buck, and even a smidge lighter than the PRT. The handle is stainless steel, with an olive drab, fiberglass front side and a high carbon stainless steel backside with orange anodized pivot ring and backspacer (which looks pretty sharp).

And speaking of “sharp,” the high carbon, 3-inch blade felt ready for business, although I admit it didn’t feel as sharp as my Buck.  The blade opens smoothly and locks with a double-click. The total length is 7.38 inches and folds down to 4.36 inches, which I believe is scientifically calibrated to fit comfortably in my pocket.

How we tested the CRKT Overland

First, the Overland product website pitches this knife as perfect for your cooking needs in austere environments, so I made sure to test it with this in mind. I used the Overland to prepare chicken breast, steak, and potatoes. The chicken, cooked and uncooked, sliced nicely. And while the knife’s sheepsfoot style blade cut the sirloin pretty easily as well, I had to make two passes to get through some thicker meat. The vegetables were no problem at all, as I’d expect. So all told, the Overland performs very well with food.

But I don’t plan on restricting my knife use to cooking. I want something I can rely on for everyday pocket knife needs, at home and out in the wilderness. So I adopted it as my EDC and used the heck out of it. I found any excuse to pull the Overland out: I cut quarter-inch polyester rope, opened packages, cut through cardboard boxes, and even used it to cut through the younger branches of an invading honeysuckle bush that I’ve been fighting for a while now. With all these, the knife handled great and cut like a champ.

The Overland blade is made of 8CR13MOV stainless steel, which has decent edge retention. I alluded above that the factory sharpness was not quite what I would have expected, but it did well in a paper cut test. However, I found that regular use of the blade over the course of a week resulted in noticeable dulling. The good thing though is I found that even with my admittedly subpar sharpening skills and undersized whetstone, I was able to get it back to a decent edge in a matter of minutes.

The size and weight are great. This knife has just enough heft to not feel flimsy, and the handle conforms nicely in the palm.  When carrying it around, I clipped the Overland to my pocket, and it was like it wasn’t even there. I’m currently sitting on my couch with my laptop and I have to feel to make sure it’s there. The clip that keeps it secured to my pocket is snug enough that I don’t have to worry about the knife slipping loose.  I’ve even carried it in my running shorts pocket, and although I was more aware of its presence, it was still quite comfortable.

The limited lifetime warranty is nice, too. CRKT promises to repair or replace any defect in material or workmanship. This ends if you modify the knife or use it to pry open beer bottles, so “match the tool to the task,” as their website says, and you’ll be taken care of if something happens.

The comfortable size comes at a slight cost in function. The 3-inch blade makes cutting thick meat a little more work than what you’d get with a slightly longer blade. It’s a minor thing, but considering that the Overland product page brags that the knife is “perfectly suited for slicing the campfire-charred sirloin,” it seems fair to note this.

I was also a little put off at how I found myself sharpening the blade within a week. Although I did use it for a variety of chores each day, I wouldn’t say I overworked it. So I was a little surprised how fast it dulled.

CRKT says that the Overland was “inspired by the classic crawling vehicle,” and that it is “crafted to go off road.” The first claim may be a bit of hyperbole, but the second is a fair claim. The Overland is like a 4×4 in knife form. It’s solid, it’s versatile, and you can rely on it for tough jobs. Considering the price point, it’d be hard to find a better mix of quality and cost. It’s very comfortable to carry around all the time, but sturdy enough for EDC use. While this isn’t as sexy as my old Benchmade, or as versatile as the PRT, this knife packs a lot of quality and utility for being under $60. I’m not saying the Buck (or any heavier knife you own) is out of a job, as a heavier blade will certainly have some work to do at a campsite. But the Overland has proven its mettle and I am more than excited to bring this knife camping.

Q. How much does the CRKT Overland cost?

A. The CRKT Overland currently goes for $54.99 at Amazon.

Q. Where is the CRKT Overland made?

A. This knife is made in China.

Q. Is the CRKT Overland easy to maintain?

A. Yes. Per the care instructions included in the box, you mostly need to keep the blade oiled periodically and lubricate the blade pivot area.

W.E. Linde spent 12 years in the Air Force as an intelligence guy and loved both his enlisted and commissioned time. Now a civilian, he toils away as a healthcare business analyst by day and wannabe writer by night because who needs sleep when you have coffee? His time in the military made him appreciate just how funny the term “military grade” can be. He currently writes for Duffel Blog and for the humor site Damperthree.com.