Review: Leatherman’s Free T4 is an effective yet bulky alternative to the classic Swiss Army Knife 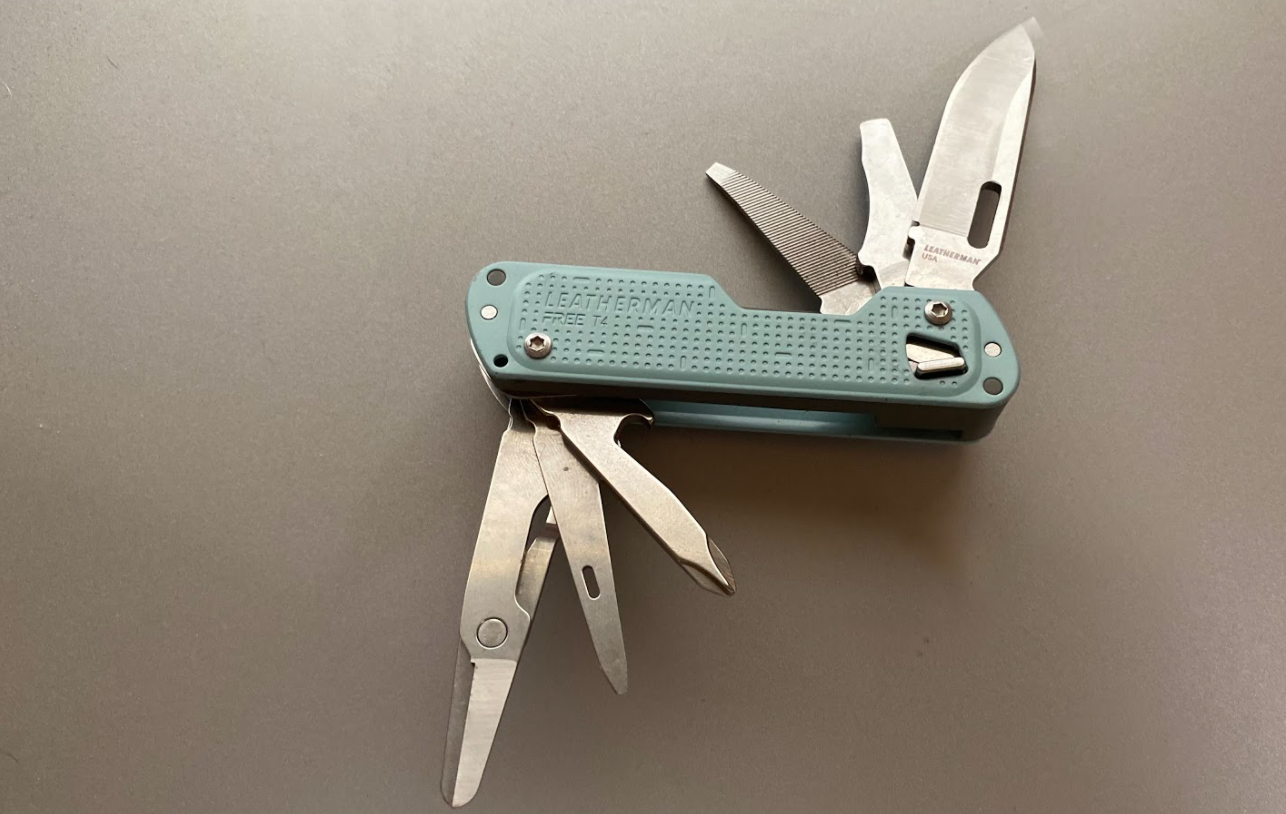 One of the best scenes in Guy Ritchie’s film Snatch involves “Boris the Blade” selling a gigantic revolver to Tommy, the sidekick to the protagonist. Boris, an unhinged Eastern European arms dealer played by brilliant Croatian character actor Rade Serbedzija, advises Tommy, played by Stephen Graham, that the weight of the hand cannon he is selling Tommy is an asset, not a liability.

“Heavy is good,” Boris says in a thick accent while wildly swinging the revolver around, “Heavy is reliable.  If it doesn’t work you can always hit them with it.”

The same could be said for many of the models of multitools made by Leatherman. Taking a full-size Leatherman with you on a backpacking trip, when every pound counts, is a substantial investment in weight for a tool.  For example, the Leatherman Wave+ comes in at a hefty 8.5 ounces, just over half a pound.  The Charge+ weighs 8.3 ounces. The Rebar weighs 6.7 ounces.  Walking around with these tools in a belt holster or in a pocket is a quick recipe for saggy pants.

When I purchased the Free T4, I intended it as an alternative to my Wave+ for those days when I did not need a complete bit kit, pliers, or wire cutters. However, it became apparent that the Free T4 was not intended to be compared to the Wave+. Instead, Leatherman intended it as a competitor to popular models of the Victorinox Swiss Army Knife, such as the Tinker and the Mountaineer.

Leatherman packages the Free T4 in a foam insert that is surrounded by a black cardboard box rather than a less attractive blister pack style of packaging. While this means you don’t get a first-hand view of the knife before purchase, it also means that you don’t need a knife to open your new knife’s packaging. I suppose that’s a toss-up between shoplifting prevention and aesthetics.

I purchased a limited edition Free T4 that came covered in an “arctic blue” (turquoise) cerakote, primarily because it matched my Olight I1R v2 flashlight (roughly the size of a 9mm round, the I1R is an excellent rechargeable flashlight). Presently, on Amazon, the knife is sold in four colorways: stainless steel, crimson red, evergreen, and navy blue. Leatherman’s website sells those four colorways along with the arctic blue and a “lunar” color (the last time I checked, the moon is a dark gray, but apparently “lunar” means a yellow that is the color of key limes to retailers).

How we tested the Leatherman Free T4

Testing of the Leatherman Freet T4 took place at 9,800 feet, alongside the burbling North Fork of the Purgatoire River in the San Juan National Forest, Colorado. I focused on functional testing of the tool, alternating between developing snare notches, shaving feather sticks, and cutting paracord.  I chose these three tests because they reflect what we most often use knives for: deep cuts, finessed carving, and cutting rope.

The test results did not surprise me, given the Leatherman’s 420HC (High Carbon) steel. Typically, 420HC steel is on the lower end of steel quality, even though it frequently rates a hardness rating of between 56 and 59 on the Rockwell Hardness Scale (all you need to know about this rating is that the higher the number, the tougher the steel). There are tradeoffs for super-hard steel alloys, such as the CPM-20CV used by Benchmade, in that knives made of these alloys are much harder to sharpen in the field. Softer steel, such as 420 HC used by Leatherman or the D2 steel used by Ka-Bar, can be sharpened in the field but will not maintain a sharp edge for an extended period.

For the snare test, I practiced carving a roughly 45-degree notch in wood to simulate a bushcraft small game snare. This notch is normally used as the trigger for the trap, releasing when an animal jostles the trigger from the corresponding stake. For an effective trap line, a hunter typically needs five to ten of these traps, so carving multiple snare notches is a common practice for these traps. During this test of the Free T4, I found that the knife blade became dull by the time I got to the fourth round of testing, earlier than expected.

For the feather sticks test, I practiced shaving small curls of hardwood that would be used for lighting fires. With feather sticks, the thinner the wood shavings, the easier it is to light them on fire.  Again, the knife grew dull by the fourth round of testing, making it harder to shave thin, easily-lit wood shavings. Dull knives are generally more dangerous — and more likely to cut a user — than sharp knives. Having this happen in the field, therefore, can have significant consequences.

Finally, for paracord cuts, I used Paracord Planet’s reflective red paracord. The litany of uses for which paracord is perfect is lengthy, so there is little reason to explain why being able to cut lengths of paracord would be useful. The Free T4 had little problem with the paracord test, able to cut through it with ease.

The Leatherman Free T4 is a new take on how a Swiss Army Knife should work. Its magnetic locking mechanism keeps the blade and other tools in place during use far better than is done with Victorinox’s slip joint blades, making it a safe knife to use. In addition, its pocket clip is a valuable addition to a smaller knife. Plus, the knife matches the colorways to Olight’s popular I1R, so EDC aficionados will be pleased to have a matching set of tools. Finally, I appreciated being able to open the knife with a single hand.

What we don’t like about the Leatherman Free T4

Three things stand out as problematic with the Free T4: its bulkiness, the speed at which the blade dulls, and its price. Leatherman is stretching the truth by claiming that there are twelve distinct tools on this knife.  Truthfully, there are no more than eight; this is like saying a spatula is two tools because it could conceivably be used as a flyswatter. The small number of tools and the Free T4’s bulkiness is insignificant until one considers that the Free T4 is much thicker than a comparable Victorinox Swiss Army Knife. If that bulkiness is not a dealbreaker for a user, this is not a significant consideration.

As noted above during testing, the Free T4’s blade does appear to get dull quicker than other blades.  However, a few minutes with a field sharpener, such as Spyderco’s Sharpmaker or Work Sharp’s Guided Field Sharpener, can return the blade to factory sharpness. Of course, the tradeoff of having an easily sharpened blade is that it is a blade that can dull quickly, so this is a subjective matter.

What is an objective matter, however, is that the Leatherman Free T4 is twice the price of comparable Swiss Army Knives. I believe this is because users are paying for the design and the branding of the Leatherman Free T4, much like they do with Persol or Ray-Ban sunglasses, regardless of quality. Thus, users will quickly see they are not receiving twice the tool they would get for half the price.  For those, like me, who enjoy collecting knives, this may not be significant — the Free T4 is a cool, unique take on the Swiss Army Knife, after all — but for those looking for a knife for solely practical reasons, the Free T4 is overpriced.

In the end, the Free T4 is a non-essential alternative to the traditional Swiss Army Knife. It has a unique and enjoyable design, and a safe, magnetic locking mechanism that is nice compared to slip joint blades that can close on a hand. Still, these are minor advantages given the features of a Victorinox Tinker or Mountaineer.

FAQs about the Leatherman Free T4

Q. How much does the Leatherman Free T4 cost?

Q. What’s the best use-case scenario for the Free T4?

A. The Leatherman Free T4 is best for day-to-day use when a full-sized multitool would be unnecessary.  It is also not an effective substitute for a survival or tactical knife.

Q. Does the Leatheman Free T4 come with a sheath?

Unlike some other models of Leatherman, the Free T4 does not come with a sheath. This should not be a dealbreaker, however, as the Free T4 fits popular sheaths from Hide & Drink, Leatherman (both the nylon and leather sheaths sold by Leatherman should work with this model), and Skinth Solutions. Additionally, the Leatherman Free T4 comes with a pocket clip, so many people may not feel that a sheath is necessary.

Q. Is the Leatherman Free T4 easy to open?

Yes, it is intended for one-hand operation not only for the blade but all the tools on this knife.

Q. Did you really buy a knife just so it would match your flashlight?

A. I have a knife collection problem.  Drug abuse would be cheaper.

We’re here to be expert operators in everything How-To related.  Use us, compliment us, tell us we’ve gone full FUBAR.  Comment below and let’s talk.  You can also shout at us on Twitter or Instagram.

Todd Brogowski is freelance writer and photographer that has been working with Task & Purpose since 2021.  He covers outdoor and tactical gear.  Todd has been in journalism in one form or another since 2000.   Contact the author here.