Review: How the Victorinox Swiss Army Rescue Tool could save your life

Always have an exit strategy. 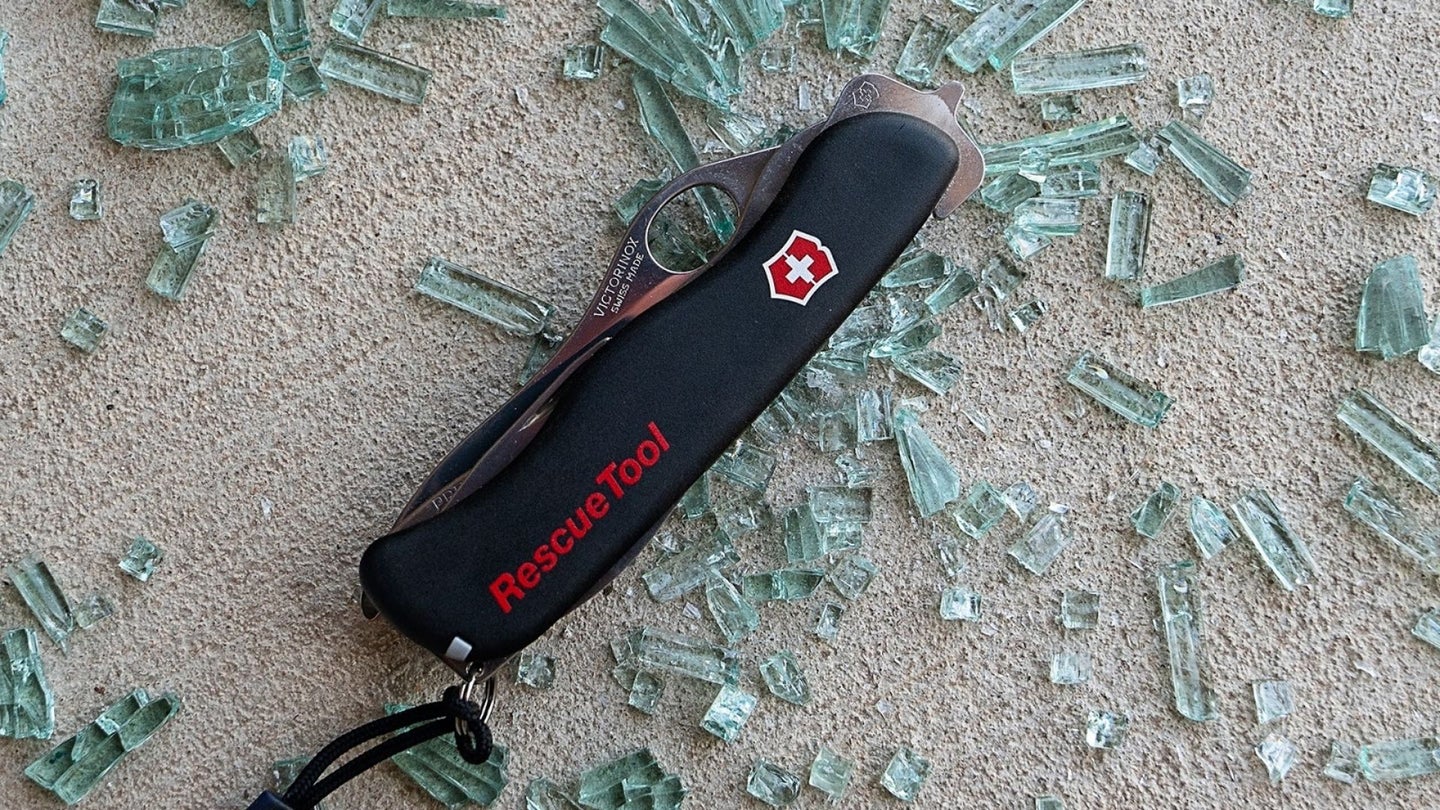 Every time we get in a car, there are decades of safety research and development protecting us. From blind-spot monitoring to lane departure warning, automakers are going all-out to prevent accidents from happening. If you are unfortunate enough to be involved in an accident, crumple zones, shatter-proof glass, airbags, and seat belts are there to protect you.

But what happens after the crash? Most people don’t bother to think about the moments that follow a car accident. Safety features may save your life, but they won’t extract you from harm’s way. Downed electronics, locked seat belts, and leaking fuel can turn a safe car into a kill zone.

A good rescue tool is designed for this exact situation. I’d rather have a utility knife or multitool than my bare hands, but something designed to handle automotive obstacles would be a whole lot better. You wouldn’t bring a knife to a gunfight, so don’t get caught in a crumpled car without the right tools, either.

This Swiss Army Rescue Tool comes from Victorinox in a simple box with a user guide and a soft carrying pouch. It’s nothing fancy, but I do get the impression that effort was put into this presentation.

The glossy user guide includes pictures showing how to do things like safely break a car’s window or saw through safety glass. Instructions are printed in several languages. A numbered product photo identifies each of the tool’s 14 features (although that number includes minor things like the nylon cord). The tool comes with either a black or neon yellow handle, and I don’t mind them only printing one version of the user guide. What’s odd is that this tool must have come with a traditional-style pocket knife blade at some point, because that’s what’s pictured in the manual. The actual blade is noticeably larger, incorporates an exaggerated thumb hole for easier opening, and is serrated for most of its length. Again, not a big deal, but pay attention to product photos when you’re shopping and be aware of the difference.

The nylon case is a quality item, matching the tool’s build quality. The material feels thick and strong, with protected edges and metal rivets. The stiff back includes a sturdy belt loop, but no way to attach this to MOLLE gear. Realistically, neither matters because this is probably going to live in your glove box or center console. It’s not really something you’d wear unless you work in some kind of roadside assistance capacity, in which case you have bigger tools at your disposal.

How we tested the Victorinox Swiss Army Rescue Tool

As interesting as a crate opener and toothpick are, I figure there are two things I’d realistically use this tool for in an emergency situation. The first would be cutting myself free from a jammed seatbelt, and the second would be bashing out a window or windshield to make my escape. To simulate these tasks, I hit up my local salvage yard (these are fantastic places for gearheads to hang out, by the way) for a seatbelt and a piece of auto glass.

Seat belts are built to a notoriously high standard and can be difficult to cut with a normal knife. I watched the scrapyard owner saw away with his knife to get my test seatbelt free. When I attacked the same seatbelt with the Victorinox rescue tool during my test, it felt like it was made of tissue paper. The serrated blade slipped through much faster than I expected, and I’d definitely appreciate that kind of efficiency in a roadside rescue situation.

Auto glass also faces rigorous safety standards (understandably). I’ve seen plenty of junk cars that look like they’ve been tossed like dice with the glass still somehow in place, even if it was cracked. Again, the rescue tool worked quickly by turning the thick, tempered glass into glitter on the first strike. After performing this well against real automotive components, I have no reason to doubt it.

What we like about the Victorinox Swiss Army Rescue Tool

Swiss Army Knives have become synonymous with versatility, and this one upholds that reputation. Unlike most automotive rescue tools, it offers more than a seat belt cutter and window smasher. The saw accounts for protective layers on shatterproof glass that’s so common in modern cars. Screwdrivers are handy for things like license plate screws and loose trim pieces. Of course, nobody will complain about getting a sharp blade as part of the deal.

Value is another strong point of this pocket knife. Coming in at less than $100, it stretches your money further than similarly-priced alternatives with useful, well-designed features. It has a toothpick, guys, what more do you want? This Swiss Army Knife costs less than the folding knives many of us carry but offers much more practicality than the safety tools you’ll see at your local auto parts store. Need to bust free of flaming wreckage? It’s got you covered. Looking for a screwdriver to make a quick repair on the go? No problem. There’s even a good old-fashioned pocket knife blade for everything else.

The selection of tools in this Swiss Army Knife is great, but the layout does have some downsides. For starters, using your fingernails to pry open certain tools one at a time isn’t the most efficient approach. It’s not a problem when you just need a screwdriver, but it could slow you down in situations when time is a factor. As always, life is about tradeoffs. If you aren’t bothered by the pocket-knife-style design, the versatility should overcome the drawbacks.

Compared to other roadside emergency tools, this one has a noticeable size disadvantage when it’s time to go. It’s small enough to toss in a pants pocket or keep in the center console, but I doubt you’d be able to generate as much leverage trying to smash a window as you would with a hammer-style tool. As with the opening mechanism, this isn’t a reason to avoid the Victorinox, it’s just something to keep in mind. After all, I sure as hell made quick work of my test glass.

I’ll be honest: I was a little skeptical of how this tool would hold up against the real deal. Victorinox and Swiss Army Knives have never let me down before, but it just seemed hard to believe that a glorified pocket knife could really perform better than a razor-sharp folding knife or a rescue hammer.

I was way off. This thing genuinely surprised me. It sliced through the seatbelt so fast that, at first, I thought it had slipped off. I expected to see a few cracks on the glass, with follow-up strikes needed to get through. I damn sure didn’t expect the whole thing to disintegrate on impact.

Consider me convinced. After this test, I took off on a 1,000-mile road trip and you can bet your ass this tool was in my glove box.

Q. How much does the Victorinox Swiss Army Rescue Tool cost?

Q. Is this a good survival tool?

A. Survival can mean a lot of different things, so it’s important to be specific. This tool is designed to get you out of a vehicle after a crash, not create shelter and hunt for food in the wilderness. Specialized equipment like a seat belt cutter, window smasher, and glass saw will come in handy when other tools aren’t able to free you from dangerous wreckage.

Q. Can’t I just use a multitool or folding knife?

A. Plenty of people have used a normal knife or multitool in roadside emergencies, but those tools aren’t always cut out for the kinds of dangers car crashes present. Automotive glass can be extremely difficult to break, especially when you’re confined to a car seat and have limited movement. Seat belts are designed to hold you in place and are known for being difficult to cut. A knife or traditional multitool is better than nothing, but it wouldn’t be my first choice when time is running out.

A. Victorinox has been building knives since 1884, and the brand has built quite a reputation for itself. Products aren’t necessarily what I’d call heirloom-quality––they’re more utilitarian and practical––but they get the job done. Expect to see signs of age over time, but you’ll get plenty of use out of a Victorinox tool long before then.

Q. How does this compare to other automotive rescue tools?

A. There are other consumer-grade automotive rescue tools on the market. Most of them are shaped like a small hammer, with a metal spike for breaking glass and a recessed safety blade for cutting seat belts. They’re popular items, but they take up more space and aren’t as versatile as this tool.

One advantage of alternative tools is that they’re simpler to operate. The Victorinox requires you to open each tool except the glass-breaker, which adds another step in a situation when time is probably limited. If you can live with that, this tool will prove to be more versatile.