Review: the Gerber MP600 multitool shoots down the competition

Shoot down a variety of problems with this timeless multitool. 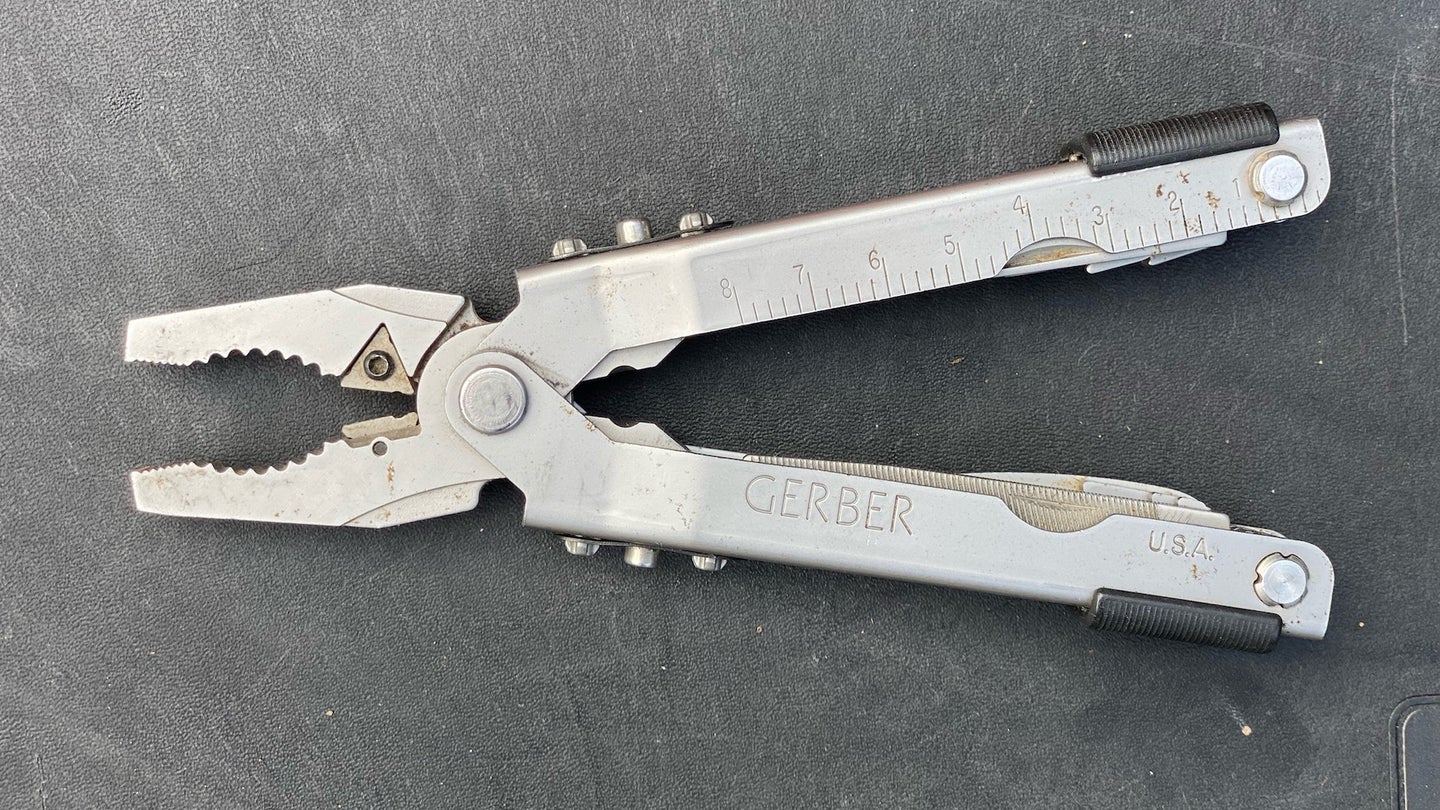 The Gerber MP600 multitool is equivalent to a Wild West gunslinger quick drawing his six-shooter to vanquish a foe. Like a pistoleer ridding his town of troublesome outlaws, the MP600 purposefully shoots down difficult situations with lightning-fast reactions. It’s no surprise that this cold-blooded killer claims to be the number one supplier to the U.S. military.

Made in Portland, Oregon, the MP600 (which stands for multi-plier 600, naturally) is a no-frills multi-purpose tool that cuts, screws, and crimps its way against any problem you encounter. It will not win any beauty contests, but it’s dressed to kill in the stainless-steel blunt nose option I tested. Compared to some other multitools on the market, it does not have the modern engineering look but instead offers a trusted charm.

Editor’s note: the Geber MP600 also made Task & Purpose’s roundup of the best multitools of the year.

What the MP600 lacks in coolness, it more than makes up for it in reliability and functionality — and at less than $70, it may be one of the last multitools you ever buy.

The Gerber MP600 I reviewed came with a black leather sheath, adorned with a metal riveted latch and a metal button. The sheath is more than sturdy enough to protect your investment and slips easily onto any belt.

Gerber advertises 14 tools with this model, but some are redundant or do not have functionality. This is common for many multitool companies to inflate their tool count. The mainstay is the patented one-hand opening pliers. Incorporated in the pliers are tungsten carbide pinch cut wire cutters, which are shaped in a triangle so they can rotate as the edges begin to dull. This is done with a T8 wrench, although I have never had to replace mine. Cutting capacity is advertised at a No. 26 hardwire or a No.2 hard fish hook. For cutting, you get a 2” fine edge knife, and a 2 ½” serrated knife. Screwdriving options include a Phillips head and three sizes of flathead. The mid-sized flat head incorporates a glass bottle opener which is a slick addition. There is a file for sharpening knives or tools, and a lanyard ring, which can hardly be considered a tool. For rapid measurement, the handles are engraved with 3 inch and 8 cm length rulers. Finally, rounding out the collection is the hobo’s best friend — an old school can opener. By my count that is 11 tools, with triple redundancy at the flat head screwdriver.

How we tested the Gerber MP600

I have done some extensive testing to the pliers because I have personally been using the MP600 for around six years, and mainly use the plier function because of the speed with which it can be dispatched. I slapped an MP600 onto my rigger’s belt for two deployments, and since I have become a homeowner have carried one on my toolbelt. There is nothing like the smooth transition on the job site or mission when the pliers spring into action. Watching someone pull their Gerber out is a work of art when done correctly, and reminds me of a cowboy reaching for his trusty Colt single-action revolver. With a purposeful motion, you pop the leather sheath and two-finger pinch the MP600 out of the holster. As you drive this motion upward and engage the buttons on the slide, your blunt-nosed pliers rapidly move into the fully erect and locked position with a slick and familiar sound. From there, you’re ready to pry and pull your way to victory. The pliers are not as strong as a pair of channel locks or slip joint pliers, but can accomplish most jobs with speed.

For this assignment, I dragged it along on a mountain biking and rafting trip my buddies and I had planned for the long July 4th weekend. Before getting my Cannondale on the truck rack, I knew a few of the brake cable wires end caps had come off. Wanting to test out the carbide cutters of the MP600, I snipped the stainless-steel wires to shorten them a touch. The cables are made of strands of steel, and the MP600’s cutters did splay two of the strands, which made for some finagling when getting the end caps on. Once the end caps were on, the blunt nose pliers made short work of crimping the ends on tightly. The bike ride went off without a hitch, and I was able to complete the 14-mile trail we had set out to conquer. During the ride, I slipped the MP600’s case into my seat post bag where its small frame fit snuggly at the ready for any future problems. On the ride home I flipped the 2-inch fine edge knife out from my MP600’s sturdy frame and easily peeled the rind of an orange as we waxed on about our ride.

The next day, we set out for the Rappahannock River in Fredericksburg, Virginia where a July 4th float was next up on our schedule. In order to tie our rafts together, I cut some two-foot pieces of 550 cord with the 2 ½-inch serrated blade and affixed bowline knots to the bitter ends to tie our rafts together in order to keep our flotilla intact. The serrated blade worked as intended. I’ve used it mostly to saw through drywall in other jobs, and the MP cut the 550 easily. While I was at it, I cut an 8-inch piece of 550 and strung that around the MP600’s lanyard ring. My buddy along for the trip remarked, “Is that what that circle thing is for?”

As we finished up our float, our appetites had been sufficiently worked up and images of hamburgers, hotdogs, and some backyard fireworks exploded in our minds. My mind was drawn, however, to the opportunity to test out the can opener on the classic side of pork and beans. Will the can opener open canned goods? Yes. Should you use the can opener if a modern can opener is available?  Absolutely not. Frankly, it’s a painstaking endeavor, but I persevered and doctored my now open beans with some ground beef, bacon, blackstrap molasses, and some barbecue sauce for a hobo chili any rail-bound tramp would approve of.

We finished the evening out in the backyard, with me and the boys prying out the fuses of the fireworks with the flat head screwdriver. Quasi-spectacular displays of red, white, and blue to the tune of John Phillips Sousa blasting on the Bluetooth speaker as I easily transitioned back and forth from fuse puller to beer bottle opener with my collocated tools. Explosions, alcohol, and tools — the American dream.

Gerber’s one-hand quick opening is unmatched on the multitool market. When something needs plying, the ease with which the MP swiftly glides from hip to hand and immediately in the fight cannot be beaten. The stainless-steel construction has held up to multiple deployments and countless projects around my house. The leather sheath for the MP600 is sturdily built, looks good on your hip, and unquestionably gets the job done. The MP600 has all the standard tools you would expect from a multi-tool and almost none of the fancy stuff. Gerber offers a lifetime warranty on the MP600, which keeps many of its customers coming back according to comments on its website. It is reliable and gets the job done most of the time.

What happens to be one of the MP600’s strengths, is also one of its weaknesses. The pliers, while quick to enter the fray, do not possess the same grip strength and prying power of the real thing. Sometimes stubborn nails prove too much for the MP600 to pry out. The Saf.T.Plus locking system works great, and tools lock sturdily in place. Over the years, however, my Gerber’s flat head screwdrivers require an additional multi-tool to get them out. This could be due to a buildup of grime and dirt over the many missions it has gone on. The carbide cutters are low-grade cutters at best, and many reviews of the MP600 refer to them chipping or completely braking requiring a replacement. The cutters did fray my bike’s brake lines, and that did add a little extra time to the job as I tried to get all the wire strands into the end cap. The file works great, but only for blades and tools not on your MP600. Perhaps a detachable file would be better. Finally, three flathead screwdrivers are a lot for one multitool. I for one would sacrifice large and small flatheads in order to fit an additional tool, like a torx head screwdriver used widely nowadays.

Despite the shortcomings of Gerber’s classic multi-tool, the benefits of having quick draw ability for the pliers is the selling point for me. It honestly comes down to what you’re going to be using your multi-tool for. If you need a rapid way to pry, pull or twist things by all means the MP600 could be the tool for you. There is a reason why the MP600 is still on the market since its 1991 release. Shoot down a variety of problems with the timeless Gerber MP600.

A. The MP600 is proudly made in the USA at Gerber’s Portland, Oregon factory.

A. Gerber is well known for creating some of the best survival knives available today.