Review: Benchmade’s Fixed Adamas knife is the perfect blade for when everything goes FUBAR

This knife won’t let you down when you need it most. 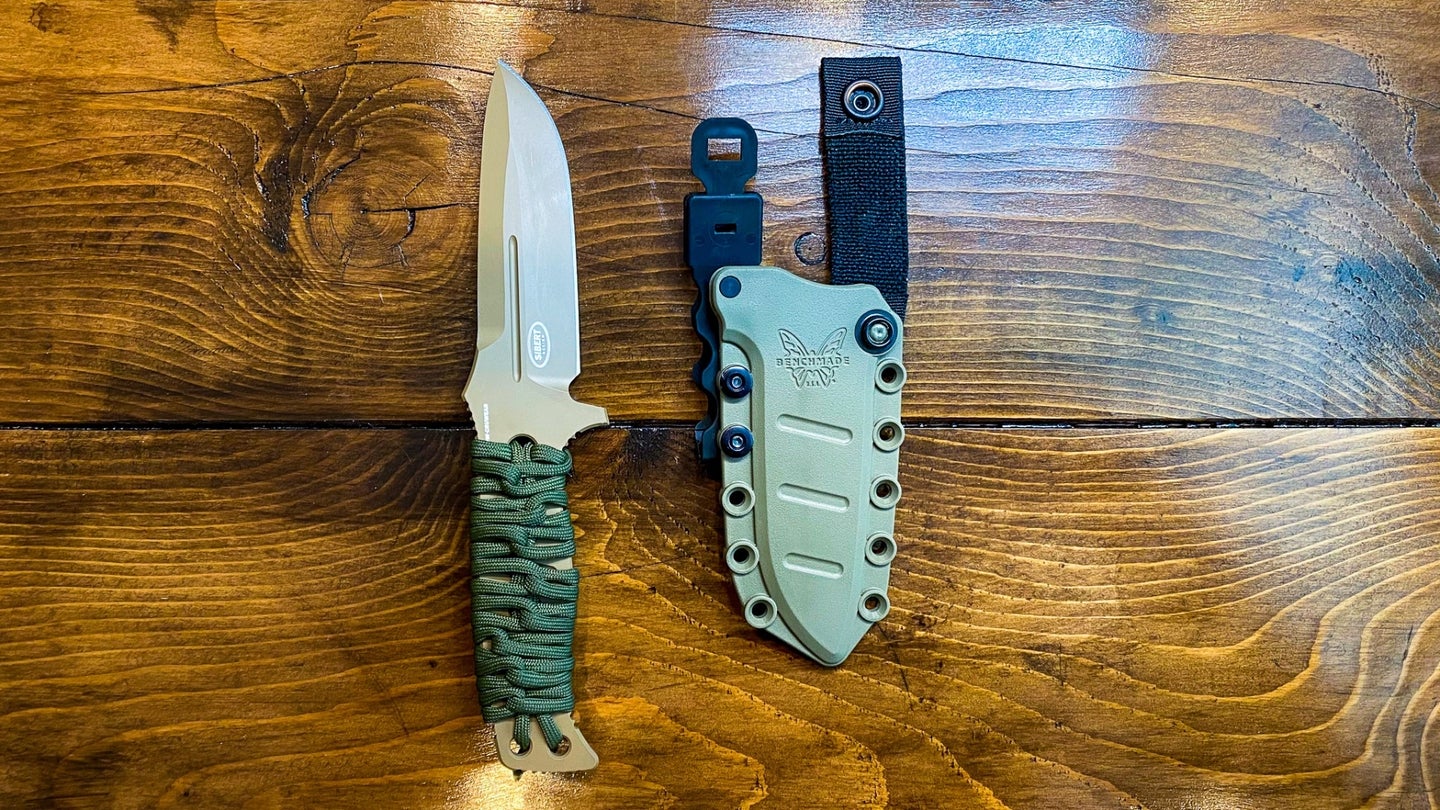 I’ve carried a knife with me since I was 14 years old. Whether that’s a crappy-little pocket knife I picked up for cheap, the fixed-blade Buck I inherited from my grandfather, or my regular EDC, I tend to keep some type of blade on my person at all times. Part of this comes from my fishing and hunting background, but it really stems from a nasty car accident I cut myself out of using my pocket knife at the time. When things go sideways, there’s nothing better than a trusty blade by your side.

Carrying a blade has, at least for me, become a necessity, and as such, I have high standards. Apparently, so does Benchmade. The Oregon-based company touts its products as some of the best in the world and recently updated its fixed-blade Adamas tactical knife to meet that lofty promise A proven commodity among many in law enforcement and the U.S. military, any updates to the knife need to be on point, so when Benchmade offered to send me a unit to test, I wasn’t about to say no.

And, after impatiently checking the mailbox every day, sometimes twice, the Adamas showed up. Here’s what I found out about this updated fixed blade — and why it might be the right choice for your own everyday carry.

Benchmade doesn’t do fancy-schmancy, letting their knives speak for themselves. The box the fixed Adamas came in is just that: a box. Sure, it has the company’s rather cool-looking butterfly crest — a nod to its original butterfly knives — but that’s about it.

In the box, all you get are the knife itself, a length of paracord for the handle, a locking PIM (polymer of intrinsic microporosity) sheath, a blade sleeve so you can grip the blade with a vise and install the paracord, and a malice clip for attaching it to your belt or MOLLE/PALS-equipped gear.

Even before I installed the paracord, this knife felt great. The Adamas ain’t at all heavy like some of its fixed blades counterparts, nor does it feel too weighted toward the drop-point blade’s edge as Benchmade’s engineers ensured there’s just enough to counterbalance the paracord when installed. That’s the sort of detail engineering Benchmade’s dropping with its knives.

The Adamas’ CPM-CruWear® (63-65) steel and damn-sharp edge feel, from the onset, equally impressive. Unboxing it, I honestly couldn’t wait to try it and, after a quick wash, I cut into a Tomahawk ribeye and used the blade as my fork. It didn’t disappoint and sliced through the steak like I was cutting air. A good omen.

How we tested Benchmade’s Fixed Adamas

After the steak, I sat down and, after watching a quick paracord-lacing tutorial, I synched up the Adamas like I was tying up a Christmas goose. With a proper handle, it felt even better and perfectly balanced.

Now, I know there’s a sizeable portion of the Adamas’ customers and prospective customers who are, shall we say, currently bedding in unsafe environs around the world and, in order to feel as secure with their knife decision, useability, toughness, and longevity are key variables when building out your gear loadout. I really needed to torture test this blade, so I did.

The dirt around my house is actually a super fine, clay-based sand. It gets everywhere and will gum up just about everything you drop into it, including my children. In the Adamas went. Repeatedly. After a thorough kicking around in said dirt, I aimed the edge at slicing through some garage lighting wire, still caked in the dirt, and it went through like nothing. Then some heavy-duty rope. Then some old Christmas tree lights our home’s previous owner left as a present for us still wrapped around a tree.

Finally, just for fun, I shaved a few strips of wood off a stump in my backyard. A quick wash and the knife looked as if I’d just removed it from the box—exactly what I wanted to see. After weeks of similarly weird abuse — I dropped it into a river, onto the gravel around my house, and cut a lot more meat — this Adamas fixed blade still looks fantastic and the edge is razor-sharp. This is a knife that just works and that, especially around my house where mountain lions stalk porches at night and mating moose tend to be aggressive, is something I need. I want a knife that won’t let me down when everything goes full FUBAR and this one definitely won’t.

What left me wanting was, unfortunately, the Malice clip. The one provided by Benchmade wouldn’t lock, despite trying multiple times. I called Benchmade up and they said it shouldn’t have happened. Luckily, I had an extra one supplied with the Mini-Adamas which I recently was reviewed for our sister site, The Drive.

I screwed that one onto the PIM sheath and attached it to my belt. The clip isn’t exactly designed for a belt attachment, as it tends to lean forward or back depending on how you’re walking. And, honestly, it’s unfortunate that Benchmade doesn’t have a proper belt attachment as, though the fixed Adamas is designed more for tactical applications, I’d wear it out into the backcountry while fishing, or hunting. The sheath is very nice, though, and has two built-in locks to keep grubby little children’s hands from unsheathing it, falling out while hiking, or doing whatever you may find yourself doing.

This is the first fixed blade knife I’ve actually considered wearing on a more frequent basis in a long time. The construction is unmatched, the blade is unbelievably sharp and strong, and the style isn’t in-your-face tactical cosplay.

I also very much appreciate Benchmade’s LifeSharp service, which will take your dulled or damaged blade and resharpen it for free for the lifetime of your ownership. That’s a company standing by their product like few companies do today. I mean, can you even really think of many that do that still? It’s few and far between.

I’m also actually good with the price, which is quoted as $250 a pop. I know what you’re thinking and, yeah, that’s a lot for a knife. But Benchmade’s durability and LifeSharp services almost ensure this is a blade you’ll keep for a lifetime. Think about how many knives you’ll likely go through that are cheaper and don’t have the guarantee? Think of how much all those will cost. See, not bad. This is a blade you can be buried with.

The Malice clip. I know, it’s not built for a belt, but the one supplied didn’t even work and the plastic is something left to be desired just by itself. I’d love to see Benchmade make a belt-attachment for the PIM sheath and build something a little stronger for the Malice clip.

Other than that, I’ve got nothing and neither will you.

Q. How hard was it to wrap the paracord handle?

A. Not especially. If you’ve ever braided hair before — I have a three-year-old daughter — you pick up on Benchmade’s guide fairly quickly. Getting it perfectly tight, perfectly aligned, and looking perfect? Well, that’ll take some practice.

Q. Can you sharpen the blade yourself?

A. You absolutely can and, though it may seem difficult or something a professional should do themselves, it isn’t too difficult. To that end, you can even use our guide here which shows you how to properly sharpen a knife.

Q. Are Benchmade knives made in the U.S.?

A. Yes, they’re built in Oregon City, Oregon, which is a mouthful of a town and state. And they’re good neighbors, too, supporting organizations like Backcountry Hunters & Anglers, Rocky Mountain Elk Foundation, Pacific Northwest Defense Coalition, and American Knife and Tool Institute.

Q. Do Benchmade knives ever go on sale?

A. Sometimes, but not as often as we’d all like. To find a sale, you’re gonna have to search around for the deals, which might take a few days, few weeks, few months, or maybe a year. But after fooling around with both Adamas family, it’s worth the time and effort.

Q. Folding vs. fixed? Which is better?

A. Preference, my friend, it’s all about preference. Folding knives are great for when you want something slim-fitting and undetected. They’re great all-around tools. Fixed won’t ever let you down as there’s nothing but the blade to break. Both have their pros, both have their cons. What you pick will, inevitably, come down to what you think suits your lifestyle best.

Q. Are there any laws against fixed blade knives?

A. Some states do have knife laws, including legal limitations on fixed blades, folding, assisted, and butterfly knives. EDC Ninja has a great state-by-state breakdown of each’s knife laws.

Related: This savage combat knife will strike the fear of God into your enemies