Do more by sticking with the fundamentals. 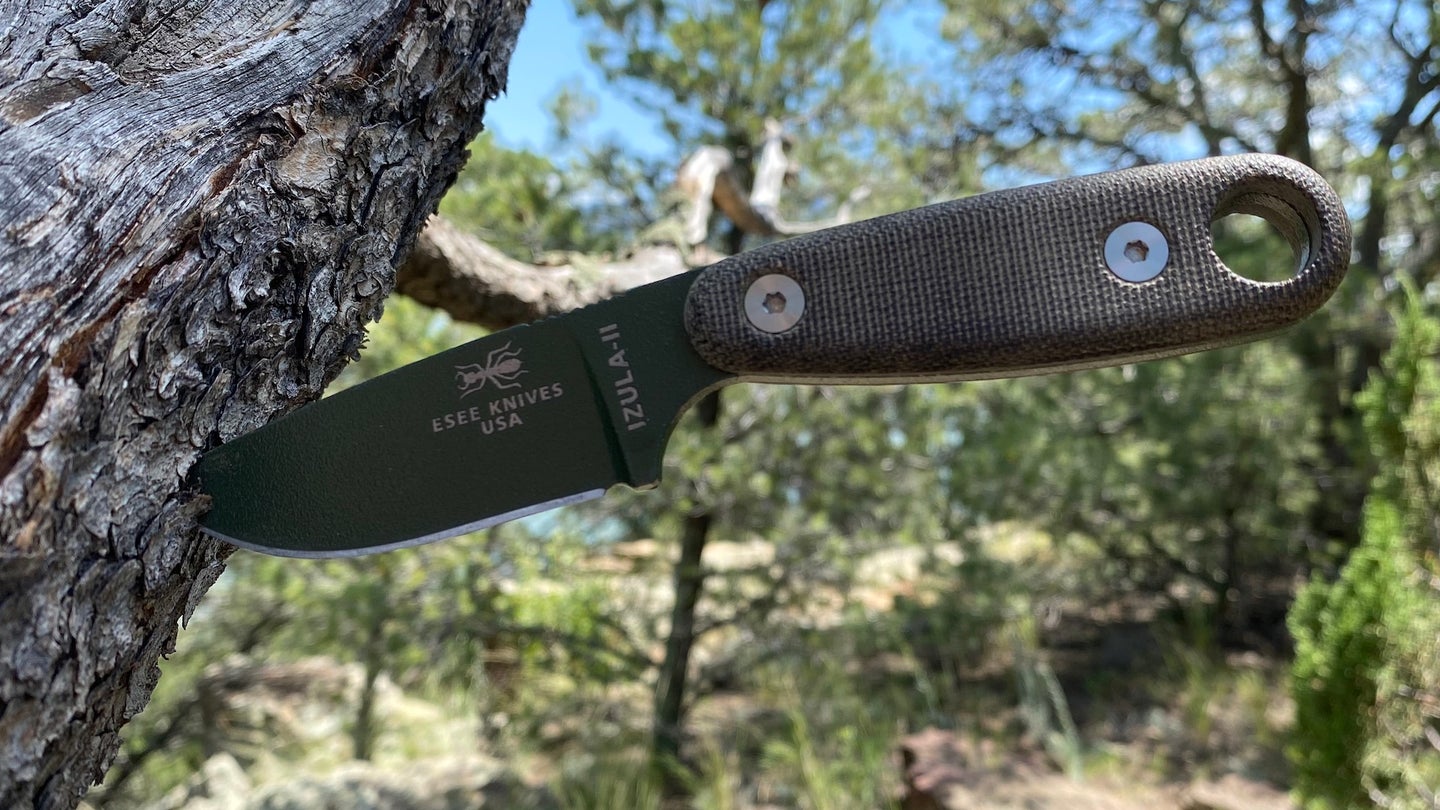 A few years back, I took stock of my everyday carry collection. I had my share of the big-name brands, such as Benchmade, Kershaw, and Spyderco. I had my oddities, such as Southeast Asian fighting knives and a noted author’s business card that turns into a knife when torn.

What I did not have, however, was a traditional fixed blade knife. To some extent, this was no mistake: I have avoided fixed blade knives since watching one of the junior enlisted in my last unit show off the hunting knife he had purchased for use on deployment, waving around its six-inch blade and talking about how “badass” he would look on the FOB.

It had been years since I had even worn a uniform. Surely, enough time had passed since the days of the badass E-4 and his hunting knife for me to use a fixed blade knife? I decided to give a fixed blade a shot, provided it did not seem too over-the-top.

I ended up selecting the ESEE Izula II as a not-too-over-the-top option. Its small size meant that I could carry the knife under an untucked shirt without anyone noticing. I wanted a knife, not an unnecessary demonstration of Freudian overcompensation (I prefer to do that with my personality).

At around $75, the ESEE Izula II is relatively inexpensive compared to other fixed blades on the market. Here’s how it stood up to testing.

ESEE is a subsidiary of Randall’s Adventure Training & Equipment Group (“RAT”), which has been training civilians and various militaries in the Amazon since 1997. When RAT began designing knives, it used now-recognized brands like Ontario Knife Company and Tops Knives to manufacture the blades. For that reason, there are many similarities between the two brands and ESEE knives. Eventually, RAT brought knife manufacturing in-house, and ESEE was born as its new manufacturing brand. Its name is a reference to the Peruvian Air Force school — Escuela De Supervivencia En La Selva  — where the founders taught survival.

ESEE packages the Izula II in a logo-emblazoned white cardboard box along with the sheath, a length of green paracord, a toggle for that cord that can also be used as an emergency whistle, and a laminated card with survival info (including morse code and signals that haven’t been used since Leonid Brezhnev’s eyebrows ruled the Kremlin). I switched out ESEE’s sheath for the far superior Armatus Architect sheath and ditched the survival card.

With a blade only 2.63 inches long, the ESEE Izula II is the second smallest knife made by ESEE. In addition, it comes with a micarta handle (micarta is a material made of canvas, linen, or other fabric and resin. The micarta handle (or “scales,” the more technically appropriate knife term) surrounds the knife’s full tang. This difference — the handles — distinguishes the Izula II from the Izula I, which lacks handles. Overall, the Izula II is 6.75 inches in length, made of 1095 high carbon steel covered in green powder-coating. The knife comes with a black plastic-and-metal sheath that clips vertically into a pocket or at the belt using a metal hook.

How we tested the ESEE Izula II

For this review, I tested the performance of the Izula II against the following other knives: the SOG Seal Strike and the Tops Brothers of Bushcraft Fieldcraft. (I am not sure what marketing gimmick led to the Fieldcraft having two names, but I am pretty sure that it did not work. For testing, this knife will be known as the Tops BoB.)

First, I tested the speed with which each knife could cut a length of paracord. Second, I tried the rate with which three notches could be carved into sticks, as a common cutting task for survival knives is preparing improvised snares. The paracord test, in my belief, is an accurate proxy for testing knife sharpness. Digging notches into wood can be a factor of torque, something the larger knives could generate more of than the Izula II (due to their handle and blade lengths). Frankly, I came into these tests with high expectations for the ESEE Izula II and the Tops BoB. On the other hand, I had lower expectations with the SOG Seal Strike, given past experiences I have had with SOG knives.

The SOG performed much better than expected on the wooden notch test. I do not know if this was a factor of leverage or just how the knife handled this particular piece of wood, but the SOG carved more deeply per cut than the other two knives. Unfortunately, it also did not have the finesse of the other two knives and started to split the wood as I got deeper. The Izula II performed with the most finesse, on the other hand. It carved a nearly perfect 90-degree edge to the notch and had the most blade control when it came to limiting the notch length.

The Izula II performed well on both tests; in fact, all three knives handled well despite each having components that would make them outperform the others at times. The Izula II’s best feature was the ease with which I could control the blade during carving cuts (a factor of the size of the Izula II, which is just easier to control than larger knives).

The Izula II has a generally comfortable, chunky handle (more on one downside of this handle later). The knife’s full tang means it is sturdier, more capable of withstanding the abuse that comes with bushcraft. I do not think it would be the knife I would use for batoning wood (as it is too short), but I think the Izula II could certainly withstand the abuse.

What we don’t like about the ESEE Izula II

I do not think anyone at ESEE intended the Izula II to be the “perfect” survival knife that will get you through everything on its own. ESEE makes more traditional knives for that purpose, such as the ESEE 6, which is actually even bigger than the Ka-Bar Becker BK2 survival knife, a benchmark for bushcraft. That means there are specific survival tasks for which I would feel uncomfortable using the Izula II.

First and foremost of these is batoning, which involves using a piece of wood as a mallet to strike a survival knife, pounding it down into another piece of wood someone wants to process into kindling. Batoning is splitting wood without an ax or hatchet. First, batoning is a survival task that exists because someone is in a survival situation where they should have brought an ax or hatchet of some sort. Most of the time, when people are in that situation, there is other wood present that could serve the same purpose as the batoned wood. The rest of the time, the people either knew enough to bring a hatchet or otherwise did not know how to baton wood. Batoning has become a bit of a show-off skill for bushcraft enthusiasts, much like lighting a fire without matches.

The Izula II is just too small for batoning and other “big knife” bushcraft skills. At 2.63 inches of blade length, the Izula II surprises absolutely nobody by being absolutely atrocious at large-knife tasks. The Izula II was intended for use as a neck knife, handling most survival skills when someone is forced to face the jungle when not prepared with full-sized bushcraft knives, loaded backpacks, and satellite navigation.

The ESEE Izula II is a knock-around knife that can take a serious beating. Because it is made of 1095 steel, a quick visit to a sharpener — even a field sharpener — can bring back the Izula II to peak performance quickly.

Because I live in the middle of nowhere, it is much easier for me to use a fixed blade knife without any stigma of looking like the crazy knife guy. I would not carry or use a fixed blade knife in a city, much like I would not wear or carry tactical clothing or gear in the city. The ESEE Izula II is the perfect size for everyday carry use for someone in my position. In fact, the Izula II or the ESEE Candiru may be the only fixed blade knives I would recommend for EDC. (In California, there may be legal limits to how someone can carry a fixed-blade knife, however, so please be mindful of the laws of your jurisdiction.)

FAQs about the ESEE Izula II

Q. How much does the ESEE Izula II cost?

A. While there is a fairly wide variance in pricing for the different color schemes of the Izula II, it’s pricing typically works out to approximately $75 on sites like Amazon. The Izula, in contrast to the Izula II, is much cheaper but comes without micarta handle scales.

A. The ESEE Izula II is intended for outdoor use, and it feels like a bit of a waste not to put it to that use. Can it open your latest package from Amazon?  Sure. Is it better suited to help you set up a deadfall snare?  Absolutely. The one warning I would give for the use of the Izula II is that, with the handles made by ESEE, be careful using the knife for hunting and fishing, as the canvas can stain and leach smells. The last thing you want is a knife that makes you smell like a two-month-old trout walking around.

Q. Does the ESEE Izula II come with a sheath or carrying case?

A. The Izula II comes with a hard plastic sheath that uses a metal belt hook. It is a functional sheath but holds the knife vertically. I prefer to “scout carry” (horizontally mounting the sheath to the small of the back), so I customized mine with an Armatus Architect sheath ($40.00-$55.00, depending on the options selected, which include mounting survival tools to the sheath).

Q. Is the ESEE Izula II easy to open?

A. That is really the whole point of using a fixed blade knife, isn’t it?

Q. What are some alternatives to ESEE Izula II?

A.  If I were looking for budget alternatives to the ESEE Izula II, which is already reasonably priced for a bushcraft or survival knife, I would pick the Morakniv 2000, which retails for $39.99. If I needed a rust-free or stainless steel version of the Izula II, I would go with the ESEE Imlay, the blunt-tipped cousin of the Izula II intended for use in whitewater rescues. If price were no object, I would select the Tops Scandi Trekker, which has much of the positives of the Izula II but with a more ergonomic design (for my hands, at least).

Todd Brogowski is freelance writer and photographer that has been working with Task & Purpose since 2021.  He covers outdoor and tactical gear.  Todd has been in journalism in one form or another since 2000.   Contact the author here.