5 MREs we reviewed so you don’t have to 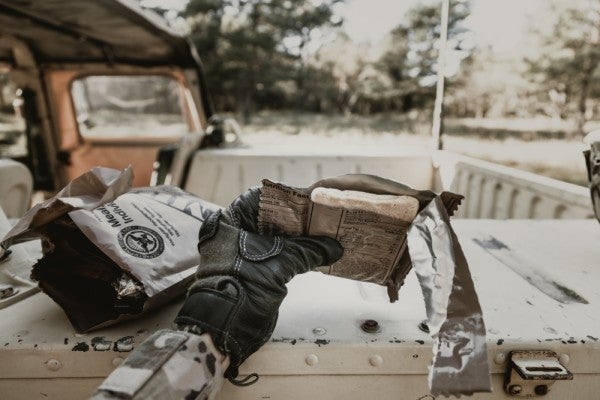 Since the beginning of time (fine, early 80s), nothing has said “taste of home” like a Meal Ready to Eat. With their monochromatic packaging, catchy little phrase (“Warfighter Recommended, Warfighter Tested, Warfighter Approved), and roughly 1,250 calories, so much about the MRE is standard issue. But once you open that package, all bets are off. Fortunately for us, there's a website devoted entirely to the history of the MRE and has been reviewing them since General Mattis was just a private.

Here are 5 of our favorite MRE reviews from “MRE Info.”

MREs have certainly improved over time, and they've definitely done their job of keeping us alive. The convenience factor is hard to beat, and that's why we're proud to offer our readers an incredible deal from Butcher Box, the delivery service committed to premium meat. Get the “Best. Meat. Ever.” delivered directly to your doorstop. For the entire month of February, new customers who sign up for Butcher Box will get two filet mignons, a package of bacon and $10 off their first order. For once, dinner in a package has never been so fresh.

Get 2 FREE Filet Mignons, Bacon & $10 off your first box at ButcherBox

1982 gave us so many memorable things to talk about: The Thriller Album. Tylenol capsules laced with cyanide. Kelly Clarkson. E.T. … the list goes on. But perhaps none more exciting than the Pork Patty MRE. Packaged with apple sauce, crackers, a cheese spread of sorts, a chocolate cookie and dehydrated “catsup,” this decadent meal was actually opened and sampled — 23 years later — by the hero we need but definitely don't deserve.

He writes: “To rehydrate the entree, I elected to use my hotel room's coffee pot. I ran some hot water through the coffee pot and then opened up the pork patty and set it in there. It just kind of floated on the top. I kept trying to sink it but it would just float back up to the top.

“After I dropped it in the water, I could definitely start smelling it – it smelled kind of like wet pork rinds. It wasn't a bad smell – just a pork-smell. I let it rehydrate for about 10-15 minutes and finally took it out to try. I took a couple of bites and chewed on it for a bit (no swallowing of the 23-year-old pork!). (Editor's note: That's what she said.) It tasted 'ok' – it certainly didn't taste rancid or foul – but there was nothing special or endearing about it.” Well luckily this whole post is special and endearing.

The 1986 Ground Beef with Spice

Like so many things in the mid-1980s (shoulder pads, mullets, car surfing), ground beef with spiced sauce seemed like a good idea at the time. This MRE was served with freeze dried fruit, a chocolate covered cookie, peanut butter and crackers. From our fearless reviewer: “My first thought was 'the finest Army Alpo!' because it really does look like something straight from a can of dog food. But it didn't smell bad and a small spoonful showed it tasted fine.”

But the real winner in this MRE was the chocolate covered cookie: “This is truly one of the best MRE desserts (in my opinion). Even better, these puppies hold up over time. This one was fresh as the day it was packed, back during Ronald Reagan's second term as President!” Not all superheroes wear capes.

Everybody always loves the guy who heats up tuna at work, so why wouldn't you and all your buddies want to gather 'round the campfire and fire up some fish pasta? Although, apparently even after a decade and some change, it held up pretty well: “I heated up the entree using the enclosed FRH. The heater worked just fine and soon I was digging into my piping hot entree. (It) tasted just fine – I also put in some salt and tabasco sauce but there was nothing about the taste that would have made me think it wasn't fresh off the shelf.”

If nothing says “thankful” like spending your holiday being rocketed in the Middle East, then the 2007 Cornbread Stuffing was made with you in mind.

“At first, the contents were not very appealing – inside was just a flat, yellow mass. Even after moving it into a bowl, it still looked like a flat, yellow mass that had been moved into a bowl. But after mixing it up with a spoon, it lost its pre-packaged look. Taste-wise, this stuff is excellent! It was not dry at all like some stuffing I've had. It was very moist – almost 'sticky.' Delicious!” See? Dreams really do come true.

Last but not least is the vegetarian lasagna. Designed to replace what we can only assume was the wildly popular vegetable manicotti, the lasagna is heralded as being “one of the few (maybe only?) MRE entrees that actually looks like the real thing.” You know when food's largest praise is “it looked like it was supposed to” that you're in for a real treat. Just like Mama Leoni used to make.