The Army may have festooned its Stryker fighting vehicles with a slew of new armaments as part of the Pentagon's relentless pursuit of lethality, but the upgunned infantry carriers are apparently hobbled by a major deficiency that makes them especially vulnerable in a fight against Russia or China 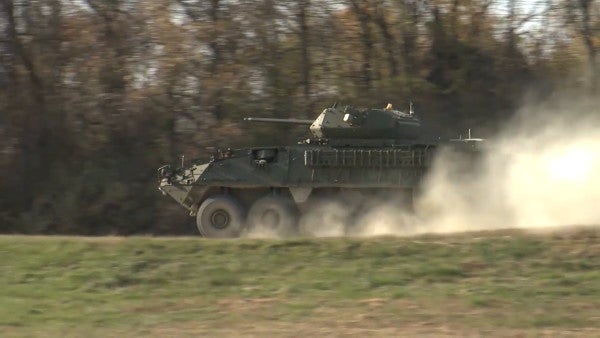 The Army may have festooned its Stryker fighting vehicles with a slew of new armaments as part of the Pentagon's relentless pursuit of lethality, but the upgunned infantry carriers are apparently hobbled by a major deficiency that makes them especially vulnerable in a fight against Russia or China.

The Stryker Infantry Carrier Vehicle – Dragoons that are currently flexing their muscles with the 2nd Cavalry Regiment in eastern Europe remain vulnerable to cyber attacks, so far that “adversaries demonstrated the ability to degrade select capabilities of the ICV-D when operating in contested cyber environment,” according to the Pentagon's operational testing and evaluation report released last month.

Even worse, the report notes that “the exploited vulnerabilities predate the integration of the lethality upgrades,” suggesting that the the Army spent too much time slapping new weapons systems like Stryker ICV-D's 30mm autocannon onto the new vehicles and not enough time fixing a major design flaw.

“Cyber attacks against computer networks supporting any of the Stryker Dragoon's onboard systems could have had a second-order effect on the vehicle's ability to use those capabilities,” The War Zone reports. “There have been a string of reports from U.S. government watchdogs warning about serious cyber vulnerabilities across the U.S. military.”

he Stryker Infantry Carrier Vehicle – Dragoon (ICVD) with a new 30mm chaingun is showcased at a static display in Stara Boleslav, Czechia, May 30, 2018.

Who exactly those craft “adversaries” are remains unclear. As The War Zone notes, they could simply be “opposing force” units tasked with testing the Stryker's capabilities, and a spokesman for the Army's 7th Army Training Command declined to elaborate on the foe mentioned in the Pentagon report.

But given that upgunned Strykers were fielded to in eastern Europe in late December 2017 as part of a response to Russia's 2015 annexation of Crimea, chances are that it's Russian cyberattacks the Pentagon is worried about.

“Right now in Syria we are operating in the most aggressive EW environment on the planet from our adversaries,” Thomas stated at the GEOINT Symposium in April 2018. “They are testing us every day, knocking our communications down, disabling our EC-130s, etcetera.”

While the Pentagon assessment recommends the Army “correct or mitigate cyber vulnerabilities,” the exploitation of the Stryker systems detailed in the report, if actually carried out by Russia, would constitute a “significant escalation” in cyber warfare in eastern Europe, as The War Zone put it. And with concerns over cyber attacks on the rise around the world, that threat probably won't go away anytime soon.

WATCH NEXT: A Stryker Fires Off Some Stinger Missiles