Many questions remain unanswered after German border police stopped a convoy of U.S. Army self-propelled howitzers coming from Poland on... 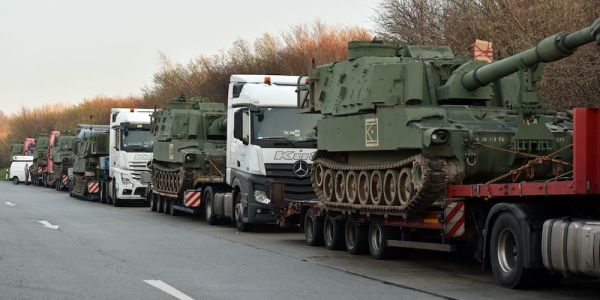 German media first reported that the Polish contractors hauling the artillery in trucks broke numerous rules, including not using the right trailers for the howitzers and not having the correct paperwork for transporting overweight and oversized equipment.

The six Paladins belong to a field artillery unit with the 2nd Armored Brigade Combat Team, 1st Infantry Division, which is en route from Poland to Germany for a military exercise that begins on Jan. 15. No ammunition is being shipped with the artillery.

The trucks driven by the contractors are only allowed to drive on German roadways between 9 p.m. and 5 a.m. “in order to minimize disruption,” said Angela Kershner, a spokeswoman for U.S. Army Europe.

The artillery pieces have been short-stopped at a German rest stop while the contractors put them on the correct vehicles and secure the necessary paperwork, Kershner told Task & Purpose on Thursday in an email. Escort vehicles are expected to arrive on Friday, allowing the artillery to finally get underway for the Hohenfels Training Area in Germany.

It was not immediately clear why the contractors did not have the right trucks, paperwork, or escort vehicles needed to transport the artillery from Poland to Germany.

“Contracted transport is often utilized to move U.S. military equipment, especially heavy and oversized equipment, as we have a limited amount of heavy transport trucks,” Kershner said. “As is required with all contracted transport of weapons systems, escorts from the unit are accompanying the Paladins and will remain with the vehicles at all times.”

German media incorrectly referred to the howitzers as tanks, when in fact they are M109A6 Paladins, which fire 155mm rounds, Kershner said.

Another question is whether U.S. Army Europe will continue to use the company that failed to meet German requirements for future convoy operations.

“The entire incident is being reviewed to identify any and all areas that can be potentially improved upon to avoid similar instances in the future,” Kershner said.

The soldiers and artillery had been deployed to Torun, Poland, as part of Atlantic Resolve, which has involved rotating U.S. troops through Eastern European NATO countries to assure them that the alliance is committed to defending all of its members.

Those temporary deployments began in 2014 in response to Russia’s annexation of Ukraine and its invasion of Eastern Ukraine in the guise of a separatist revolt. Since then, the Army has rotated troops through Estonia, Latvia, Lithuania, Poland, Romania, Bulgaria, and Hungary.

The Paladins will be part of exercise Allied Spirit VIII, which will involve a total of 4,100 troops from 10 countries, Kershner said. Afterward, the howitzers will head to Grafenwoehr, Germany, until they head back to the United States with the rest of the unit in June. Another Armored Brigade Combat Team deployed to Eastern Europe with Paladins during a previous Atlantic Resolve rotation.

“U.S. military equipment is moved into and out of Germany on a constant basis,” she said. “In 2017 the U.S. Army participated in over 100 exercises with our Allies and Partners, necessitating troop and equipment movements throughout Europe. Atlantic Resolve units regularly participate in these exercises.”