US Plans To Commit Combat Troops To NATO’s Eastern Flank 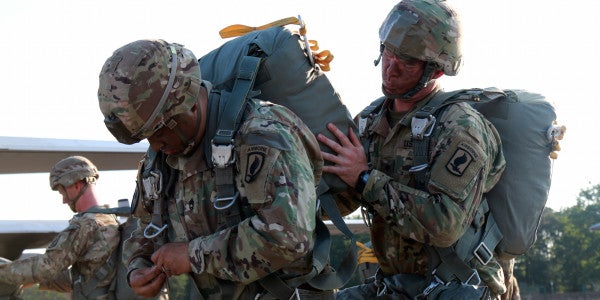 NATO officials are close to securing a deal that would station one U.S. combat battalion along with three allied battalions on Europe's eastern flank as an additional deterrent to future Russian aggression, according to military experts.

The plan to bolster military presence in Poland and the Baltic states of Estonia, Latvia, and Lithuania comes as NATO officials are preparing for the a summit in Warsaw set for July 8–9.

The U.S. military for months has been conducting joint exercises with other NATO military units in Europe to reassure allies and deter Russia from attempting future operations similar to its incursion into Ukraine in 2014.

So far NATO's military response to Russia deploying thousands of troops into Ukraine has come in the form of small-scale airborne operations involving several countries.

Swift Response 16, which began May 27 and is scheduled to run through June 26 in Poland and Germany, will include more than 5,000 soldiers and airmen from the United States, Belgium, France, Germany, Great Britain, Italy, the Netherlands, Poland, Portugal, and Spain.

Swift Response will demonstrate the allies' ability to respond to a crisis scenario from staging bases in both Europe and the U.S. within 18 hours of notification.

A battalion of 1st Brigade, 82nd Airborne Division will make a 10-hour transatlantic flight — including en-route refueling, mission planning and parachute rigging — from Fort Bragg, North Carolina, to parachute into the exercise area near Torun, Poland.

The Pentagon also recently announced it plans to deploy an armored brigade combat team to Eastern Europe next February. That plan essentially calls for the constant presence of a third brigade in Europe. Two are already permanently stationed in Europe — a Stryker brigade and an airborne brigade. And now a brigade will rotate in and out on a continual basis, according to the Associated Press.

In addition to these three combat brigades, the United States has agreed to commit one battalion to be stationed on the eastern flank, according to Heather Conley, director of the Europe Program at the Center for Strategic and International Studies, a think tank in Washington, D.C.

“I think the U.S. is making a commitment to a more sizable, more credible deterrent,” Conley said.

In addition to the United States, Germany and the United Kingdom have also pledged to commit a battalion to the effort.

“We have pretty strong commitment,” Conley said. “A NATO member has to come forward with one more battalion,” she added. “I think we are there, but clearly this exercise demonstrates that NATO contributors are stretched.”

The French, for example, have already made it clear “they just don't have the forces to contribute,” Conley said.

Russia is likely to view the deployment of additional forces as a threat, but it's unclear how strongly it will react, experts say.

“They will probably be highly critical and may intensify some of their provocative activities, such as aggressive maneuvers in the Baltic and Black Sea areas and around NATO airspace more broadly,” said Elbridge Colby, the Robert M. Gates Senior Fellow at the Center for a New American Security, another Washington, D.C., think tank.

“It is unlikely that the Russians will do something highly dramatic, however,” he said. “Moscow will likely understand that such a modest deployment of what appears to be relatively light forces does not pose a material new threat to it.”

Conley noted that Russia has stated, “they will move three divisions to the Western Military District.” The country has been rebuilding and modernizing its military since it invaded Georgia in 2008.

“I think there is a growing consensus that since 2008 and the Georgia-Russian conflict, the Russians have put substantial focus on modernizing their military and particularly focusing on rapid mobilization,” Conley said.

“They are able to deploy, some have estimated, upwards of 80,000 forces within 48 hours,” she said. “Their combined arms operations are certainly improved … their artillery has been extremely effective.

“I think defense officials realize this is certainly a peer competitor in some areas,” she said.

While four battalions is not a significant deterrent, most NATO officials maintain this is just one step in a long-term challenge, Conley said.

“The point of this credible deterrence is to the recognition that should there be any thoughts of crossing into NATO territory, a significant amount of punishment will be inflicted,” she said. “There is a recognition that we have got to do this; we just have to move a little faster and have policy makers keep focus on this area.”