After testing out a batch of upgunned Stryker infantry fighting vehicles in Europe, the Army appears poised to field its beastly new 30mm autocannon system across even more of its existing Stryker fleet 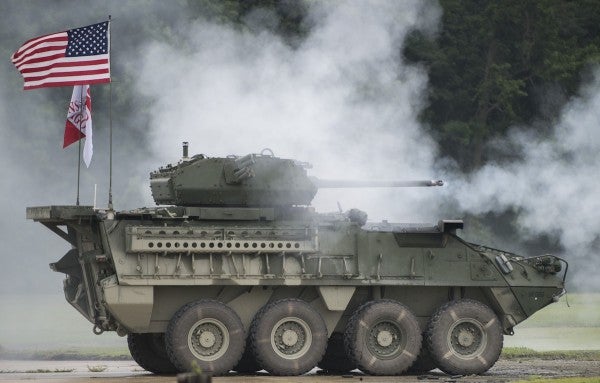 After testing out a batch of upgunned Stryker infantry fighting vehicles in Europe, the Army appears poised to field its beastly new 30mm autocannon system across even more of its existing Stryker fleet.

In a recently-updated pre-solicitation, Army Contracting Command detailed a need for 269 XM813 30mm autocannons that, based on the Mk44 Bushmaster II from Northrop Grumman, are part of a lethality-centric engineering change proposal (ECP) for the service's fleet of infantry carriers.

The request comes one year after Army Contracting Command detailed a new requirement to integrate the XM813 capability developed under the MCWS moniker onto the Double “V” Hull (DVH) Stryker Infantry Carrier Vehicle (ICVVA1) that the Army has increasingly embraced to deal with IED attacks.

That decision that came following the success of the up-gunned Stryker Infantry Carrier Vehicle — “Dragoon” with the 2nd Cavalry Regiment in Europe.

The following May, the Army announced plans to outfit three of its six existing DVH ICVVA1 brigades with the 30mm system by fiscal year 2022.

According to the Army's fiscal year 2021 budget request, the service intends on incorporating the XM813 into the roughly 42 DVH ICVVA1 vehicles under the service's 30mm Lethality Mission Equipment Package this fiscal year.

But in addition to those 42 vehicles, the Army's budget documents detail a broader lethality ECP intended to incorporate “other capabilities” into the service's existing fleet, a proposal that suggests that Army intends to proliferate the XM813 across its regular Stryker vehicles.

“These improvements will provide for increased under armor fire capability, target identification range, provide overmatch against peer threats and supporting infantry assault, and address obsolescence within the targeting and reconnaissance systems utilized on the Stryker Family of Vehicle (FoV),” according to the service documents.

It's unclear exactly how many vehicles, which types, and which brigades will first receive the new 30mm autocannon.

The Army's Program Executive Office for Ground Combat Systems did not immediately respond to request for comment.