In their fight against ISIS, American troops face a dangerous and unpredictable new threat on foreign battlefields: weaponized drones specially... 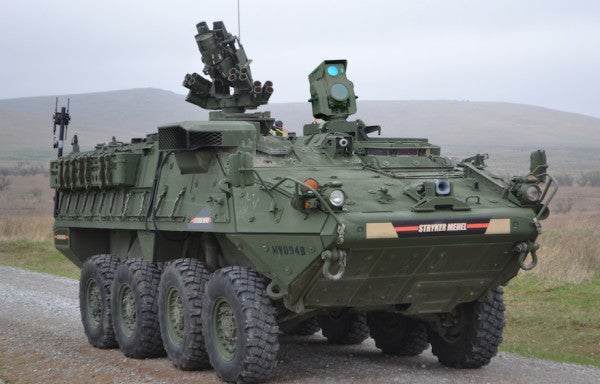 In their fight against ISIS, American troops face a dangerous and unpredictable new threat on foreign battlefields: weaponized drones specially designed for suicide missions. And while all branches of the military are exploring advanced gear for combat troops that will counter the new threat of “flying IEDs,” the Army has already whipped up a special armored vehicle to keep soldiers out of harm's way.

Last week, the Army unveiled a specially modified Stryker Infantry Carrier Vehicle (ICV) prototype outfitted with a special surprise for ISIS militants: an experimental laser weapon that can shoot down enemy drones without firing a single round — or making a sound.

Dubbed the Mobile High Energy Laser (MEHEL), the Army showed off the Stryker at the Maneuver Fires Integrated Experiment (MFIX) at Fort Sill, Oklahoma, blasting more than 50 remote-controlled test targets out of the sky with its 5 kilowatt laser cannon. Here’s the Army account of the test:

On a television screen in a nearby tent off Thompson Hill — a range used during the 10-day Maneuver Fires Integrated Experiment here — observers watched the black and white output of those sensors on two flat-screen televisions, April 12. A crosshair was centered on the screen. When what appeared to be a drone entered the frame, the crosshairs locked on to it and followed it.

After a few attempts to destroy the drone with the laser, the drone fell from the sky, crashing to the ground. Not a bullet was fired, and no sounds were made by the system that accomplished the kill.

“We were skeptical at first, when we were first briefed we'd be shooting down drones with lasers,” the MEHEL commander, Army Capt. Theo Kleinsorge, said of the demonstration. “We achieved a success rate well beyond what we expected we'd have and we are excited to see this go to the next step of the experiment, shooting beyond the horizon, and showing this technology can solve the problem.”

This Mobile High-Energy Laser-equipped Stryker was evaluated, April 12, during the 2017 Maneuver Fires Integrated Experiment at Fort Sill, Oklahoma.Photo via DoD

The Army’s Stryker Brigade Combat Teams, already a favorite combat support platform for decades, were slated for upgrades as of 2016, including a medium-caliber cannon and Javelin anti-tank missiles. But given the emerging threats posed by ISIS UAVs, the MEHEL seems like an appropriate pivot for the Pentagon. The War Zone has a great breakdown of the MEHEL’s specs:

A basic Stryker ICV weighs in at nearly 16.5 tons, has a top speed of over 60 miles per hour on improved roads, and usually carries a .50 caliber M2 machine gun or a 40mm Mk 19 automatic grenade launcher. The MEHEL still has a machine gun, but its main weapon is a five kilowatt laser. On top of the laser, the vehicle had has powerful cameras to detect and track targets, as well as electronic warfare equipment. The latter system can try and crash an unmanned aircraft by jamming the signal from its control station, as well as try and pinpoint the location of those sites.

This isn’t the first time the Army has experimented with direct-energy weapons to counter enemy drones. In 2016, the Army’s Space and Missile Defense Command demonstrated the High Energy Laser Mobile Test Truck (HELMTT), outfitted with a 10 kilowatt laser director, during last year’s MFIX.

“Our team did a great job,” SMDC Technical Center HELMTT demonstrator program manager Adam Aberle said at the time. “We absolutely blew lots of stuff up.”

Despite the spectacular test at the 2017 MFIX, it’s unclear when the MEHEL will actually deploy downrange to Afghanistan and Iraq. But based on the excitement of program managers and observers on hand to watch the MEHEL in action, lasers can’t hit the battlefield soon enough.

“It's mind-blowing stuff to think you are shooting a laser at something,” Spc. Brandon Sallaway said of the MEHEL test at Fort Sill. “Sometimes it's hard to fathom.”