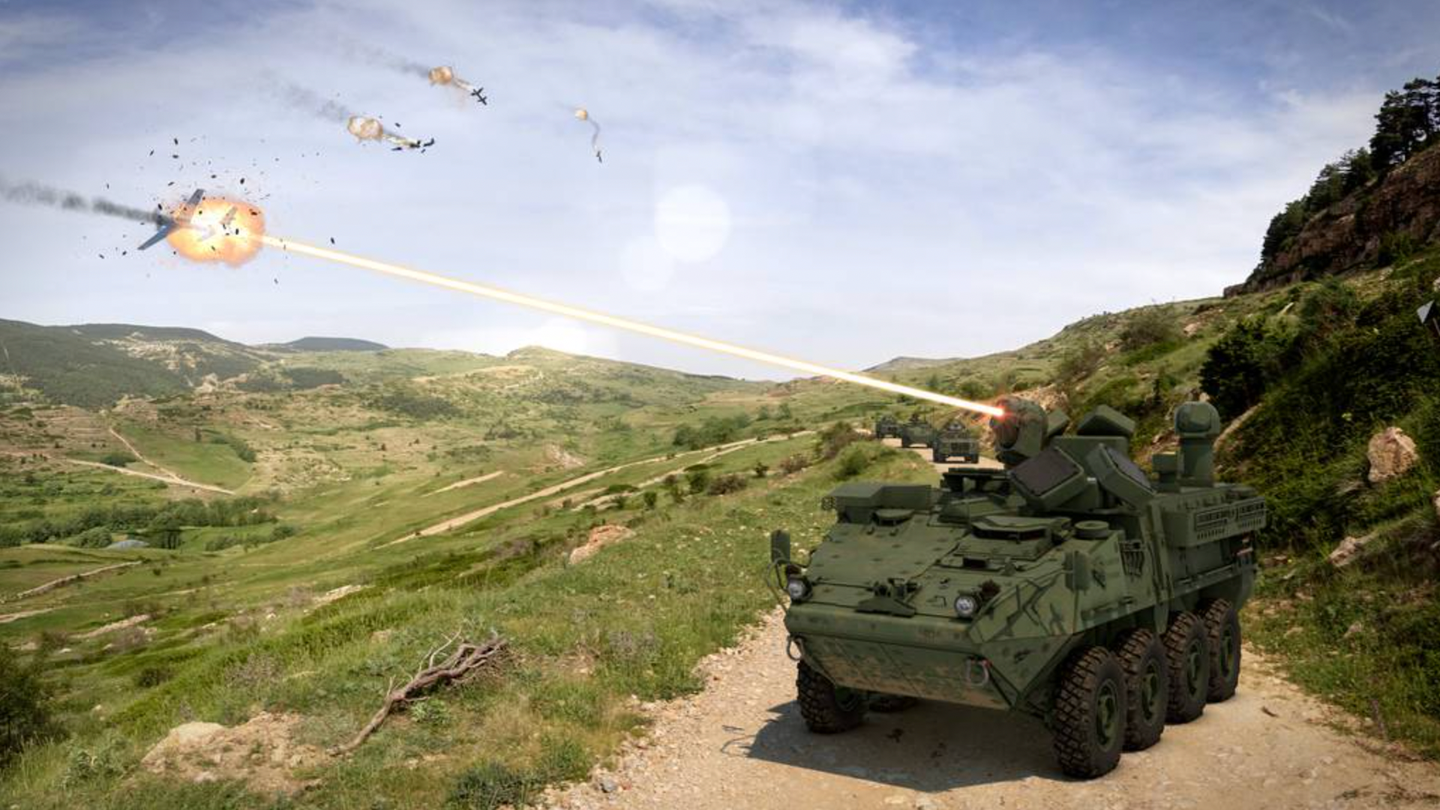 An artist rendering of a DE M-SHORAD Stryker vehicle in action. (Raytheon).
SHARE

After years in development and months of delays, the Army will finally stand up a platoon of four Stryker fighting vehicles outfitted with prototype laser weapons next month.

The fielding of the 50-kW DE M-SHORAD system comes after then-RCCTO chief Lt. Gen. Neil Thurgood promised in August that the new laser-equipped Strykers would be delivered to an air defense battery at Fort Sill “within the next 45 days,” or by October 2022.

According to Defense News, RCCTO officials decided to keep the DE M-SHORAD laser system in the development phase for a few extra months to ensure the final product can be produced and fielded at scale.

“We want to make sure when we actually transition a program or a capability that we mature not just the prototype from an operational capability but have a good competitive space and good manufacturability processes in place as well to make that PEO successful,” new RCCTO chief Lt. Gen. Robert Rasch told Defense News in mid-October.

Despite this delay, the DE M-SHORAD laser system appears ready for prime time. An RCCTO spokesman told Task & Purpose that the weapon’s “critical subsystems and other components” had “successfully demonstrated a high degree of technical readiness against threat sets” during a March test at the White Sands Missile Range in New Mexico.

Finding new and innovative ways to counter incoming rockets, drones, and mortar fires from adversaries has become an increasingly pressing modernization priority for the Army, one that’s become even more acute with the rise of drone warfare in the Middle East and, even more recently, amid the Russian invasion of Ukraine.

Indeed, while soldiers with the 2nd Cavalry Regiment have been rocking 5 kW laser Strykers downrange in Europe for the last several years, the 50 kW iterations eventually headed to Fort Sill represent a major increase in power that might finally prove capable of effectively intercepting incoming drones and ordnance.

Regardless of power, the allure behind laser weapons is relatively simple: compared to conventional heavy weaponry, the laser represents a deeper magazine with less cost per shot and less weight for soldiers to haul into battle.

The Army is so bullish on laser-equipped infantry carriers that RCCTO is currently pursuing the development of a 20 kW laser weapon to accompany the Infantry Squad Vehicle assault buggy downrange, as Breaking Defense previously reported.

The so-called Army Multi-Purpose High Energy Laser (AMP-HEL), which will reportedly see delivery to the service sometime in fiscal year 2023, will only protect against certain types of drones, leaving soldiers vulnerable to rockets, artillery, and mortars, per Breaking Defense.

Still, the eventual arrival of America’s very first laser platoon will likely mark a historic moment for the proliferation of futuristic laser weapons across the Army in particular and the U.S. military as a whole. Now if only we could get those into the hands of infantry troops…