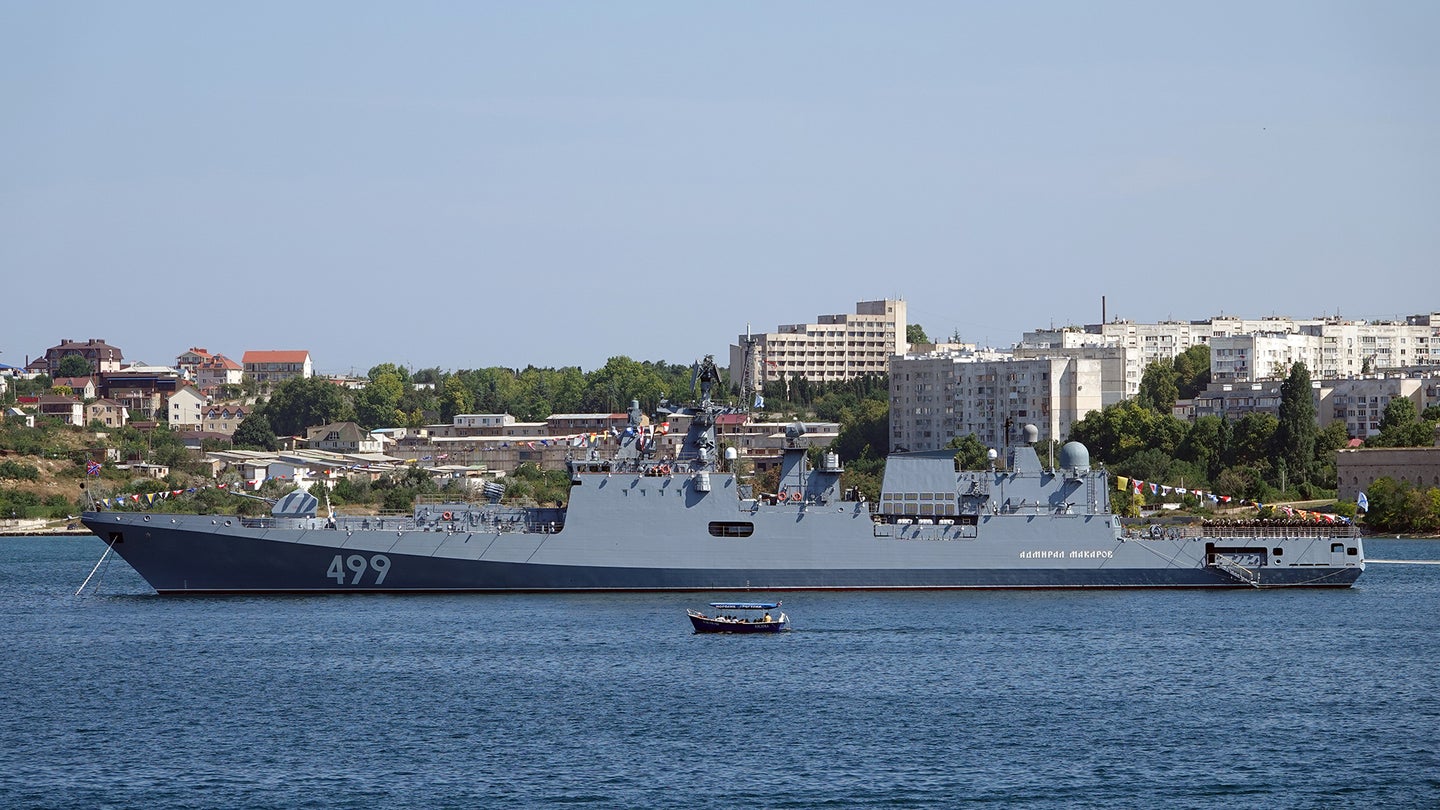 Ukraine’s daring attack on Russia’s Black Sea Fleet over the weekend should serve as a warning to the U.S. Navy that the threat posed by unmanned boats laden with explosives to larger warships is real — and it will only become more dire as the technology of drone boats continues to improve.

As The War Zone recently reported, the Ukrainian military has released video footage that purportedly shows the attack on Russian warships by unmanned surface vessels, one of which may have damaged a Russian frigate, the Admiral Makarov.

On Monday, a senior military official told reporters the Defense Department believes explosions had taken place at Russia’s naval base in Sevastopol in Crimea, but the official declined to say what may have caused the blasts or how extensive the damage was.

The senior military official also refused to say if any unmanned coastal defense boats that the United States had provided Ukraine were used to attack any Russian ships, and the official deferred questions about the Admiral Makarov to Russia’s defense ministry.

Ukraine’s attack on Sevastopol could be a preview of the future of naval warfare, just as the British Royal Navy’s November 1940 attack on the Italian naval base at Taranto proved that airplanes launched from aircraft carriers could successfully attack capital ships more than a year before the Japanese navy launched its own carrier-based aircraft to attack Pearl Harbor.

For decades, the U.S. Navy has heard warnings about the threat posed by suicide boats. In October 2000, Al Qaeda terrorists rammed into the side of the destroyer USS Cole with a boat packed with explosives. The detonation killed 17 sailors aboard the ship and injured 37 additional crew members.

Retired Navy Cmdr. Kirk Lippold, the commanding officer of USS Cole at the time, told Task & Purpose that he is concerned that the Navy has become less focused on the threat of suicide boats because there have not been further such attacks against Navy warships.

Lippold said that each Navy ship needs an officer whose sole job is to, “Look at the entire spectrum of threats and bounce that against force protection measures and intelligence to be able to determine what is going to be the best way to protect our ships.”

The Navy must be able to fight and win against near-peer competitors, but it also needs to prepare for asymmetric threats because China could conceivably use remote-controlled boats to attack U.S. Navy ships based in Japan, Lippold said.

In 2002 Marine Lt. Gen. Paul Van Riper showed top military leaders exactly how much damage an adversary using suicide boats could do. Riper led the Red Team during a now-infamous wargame called Millennium Challenge 2002. In a 10-minute attack, Van Riper unleashed a wave of suicide speedboats that sank 19 of the Blue Team’s ships and caused 20,000 casualties.

Unfortunately, Millennium Challenge 2002 was not a wake-up call for the military. Rather than take the lessons Van Riper had demonstrated to heart, the military instead imposed a series of arbitrary limitations on the Red Team that were clearly intended to make sure the Blue Team won. Frustrated, Van Riper quit as leader of the Red Team midway through the exercise.

Between January 2017 and June 2021, the Houthis are believed to have carried out a total of 24 successful or attempted maritime drone attacks, Håvard Haugstvedt, of the University of Stavanger in Norway, wrote for War on the Rocks.

A Navy spokesperson declined to comment when asked on Monday what steps the service was taking to protect its vessels from attacks by unmanned boats and aircraft, from Iran, China, Russia, and other adversaries because the Navy does not discuss its force protection measures and future operations, nor does the service speculate on hypothetical scenarios.

China’s People’s Liberation Army is likely watching the war between Russia and Ukraine closely, as its strategists have long included lessons from foreign wars into its military doctrine, said retired Navy Capt. Thomas Shugart, a military innovation expert with the Center for a New American Security think tank in Washington, D.C.

“That being said, it’s hard to know if this Ukrainian drone attack will make China more interested in unmanned surface vessels, as the PLA is already quite focused on the large-scale development of unmanned vehicles of all types,” Shugart told Task & Purpose. “Certainly, the use of surprise in an attack such as this would already be consistent with the PLA’s long-time focus on sudden, surprise strikes against adversary facilities and forces.”

To retired Marine Lt. Gen. Van Riper, who famously led the Red Team during Millenium Challenge 2002, the U.S. military still has not fully grasped the significance of unmanned boat attacks and it is only now taking initial steps to meet the threat.

By assuming that China will be its future adversary, the U.S. military has lost focus on other threats, such as Iran, said Van Riper, who added the Defense Department needs to spend more time practicing how to maneuver and to launch psychological operations.

What Ukraine’s drone attack makes clear is that whichever adversary America faces next will likely use relatively inexpensive unmanned weapons systems to counter the U.S. military’s warships and other high-technology weapons systems.