The new aircraft carrier may still be working out the kinks, but its battle flag is certainly ready for action. 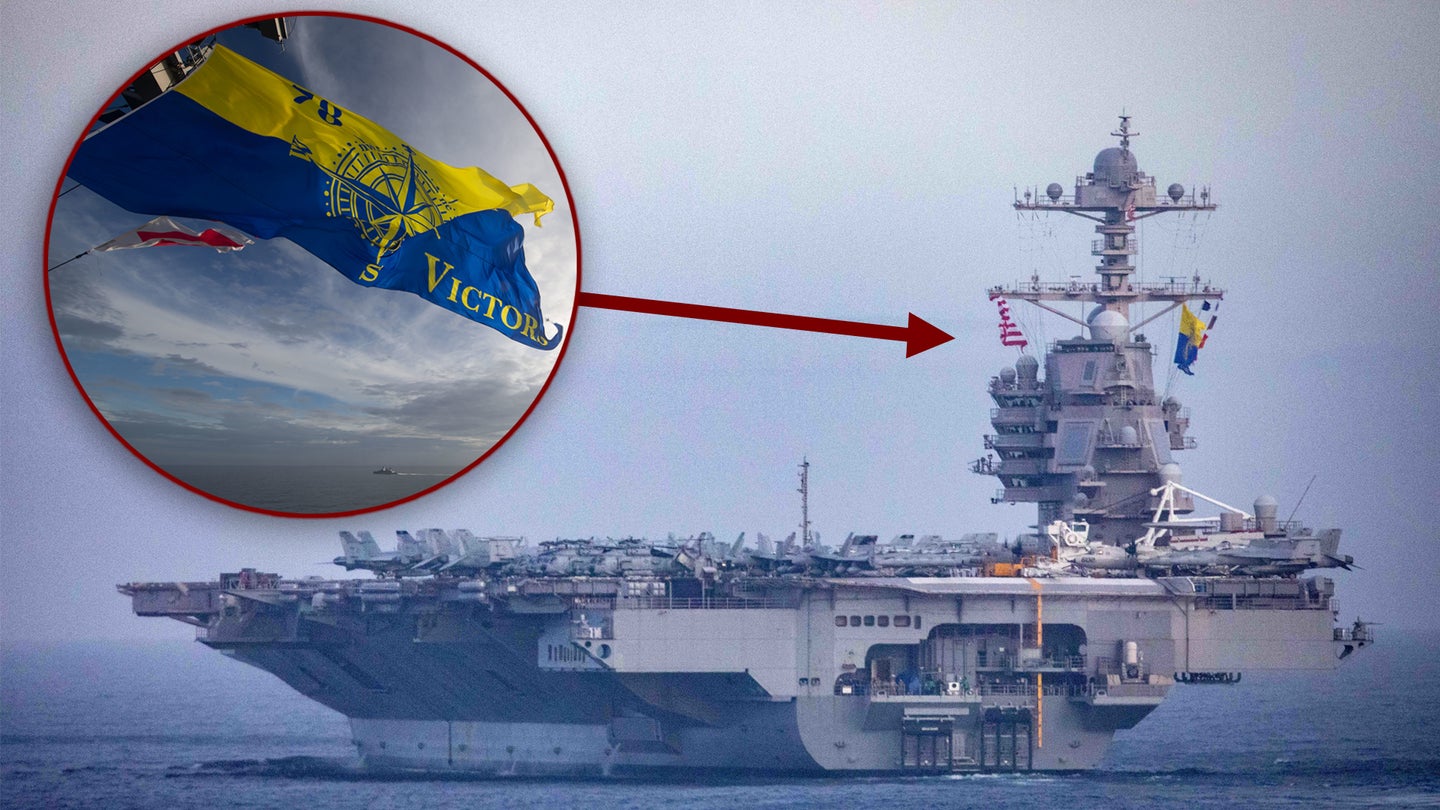 The first-in-its-class $13 billion USS Gerald R. Ford aircraft carrier may only be undergoing “service-retained early employment” ahead of its first formal deployment next year, but that doesn’t mean the once-embattled supercarrier can’t mark its first serious trip on the high seas with some pomp and circumstance.

While operating alongside NATO allies in the Atlantic Ocean, the Ford unfurled a distinctive blue-and-yellow battle flag for what appears to be its first formal reveal aboard the aircraft carrier.

As with most Navy battle flags, the colors and symbols selected for the Ford’s banner pay homage to the ship’s namesake, President Gerald R. Ford. The core color scheme of maize yellow and blue represents the 38th president’s undergraduate years at the University of Michigan, while the nautical compass topped with a fleur-de-lis at true north symbolizes not just the spirit of Ford’s naval service during World War II, but his “distinction as the only President who achieved the rank of Eagle Scout,” according to the Gerald R. Ford Presidential Foundation.

The flag is clearly evocative of the ship’s crest, which was originally unveiled back in 2013. While the ship’s motto of ‘Integrity At The Helm’ — meant to highlight Ford’s “extraordinary legacy of integrity and honesty and his legacy’s connection with the Navy’s core values,” according to the Ford Presidential Foundation — appears on the crest, the battle flag merely reads merely ‘Victory’ with a 78 for the ship’s CVN number. Despite this, both crest and flag center the nautical compass as its core symbol, a tribute to both Ford’s naval career and his moral fortitude.

“The biggest attribute that we have on there is the compass, which you can refer to as a moral compass. That was what ruled Gerald R. Ford’s life,” said the Ford’s then-commanding officer Capt. John F. Meier way back in 2013. “As we talked with Susan Ford Bales, our ship’s sponsor, and other Ford family members, it’s become extremely evident that Gerald Ford was a man of integrity above all else. He made decisions he knew would not be popular, but did what he felt was right and I really admire that.”

Ford enlisted in the Naval Reserve in the aftermath of the Japanese attack on Pearl Harbor that catapulted the U.S. into World War II. Applying for sea duty in 1943, he ended up aboard the Independence-class light aircraft carrier USS Monterey until December 1944, during which the carrier helped capture Makimn Island and participated in numerous carrier strikes across the Pacific before the carrier was damaged by a typhoon-induced fire, according to the Gerald R. Ford Presidential Library. He eventually left the service in 1946 as a lieutenant commander.

Ford “is a fantastic role model for the crew,” Meier said. “His service to country really is limitless. He was a young lawyer when the attack on Pearl Harbor happened, Dec. 7, 1941. He volunteered to join the Navy, sailed into harm’s way and saw combat in World War II, not unlike the Sailors who are in this command who joined the service following the attacks on the U.S. on 9/11. A lot of folks saw that attack and immediately their response was, ‘Well, how do I serve my country?’ And they went and signed up for the Navy. I love that aspect of our namesake.”

The Ford flew its battle flag while steaming in formation with the Ticonderoga-class guided-missile cruiser USS Normandy, the German frigate FGS Hessen, and Dutch frigate HNLMS Van Amstel, among other warships, according to the Defense Visual Information Distribution Service (DVIDS), part of the Ford Carrier Strike Group’s mission “to enhance integration for future operations and demonstrate the U.S. Navy’s commitment to a peaceful, stable and conflict-free Atlantic region” — a long-winded way of saying that this giant ship will help keep America’s territorial waters safe.

The Ford’s initial cruise comes more than five years after the carrier was originally commissioned and four years after its initial deployment was pushed back due to problems and delays in developing and testing the carrier’s next-generation technologies. Indeed, the issues with the Ford’s much-maligned electromagnetic launch system (EMALS) and advanced arresting gear (AAG) for quickly launching and recovering aircraft, faulty weapons elevators, and immature self-defense technologies are well documented in official reports from the Defense Department’s top weapons tester.

The Ford’s integrated combat system “has yet to demonstrate that it can effectively complete its self-defense mission against the types of threats for which the system was designed,” according to the controlled unclassified version of the Pentagon’s Director, Operational Test and Evaluation fiscal year 2021 report on the Ford’s systems published by the Project On Government Oversight. The same report notes that several core systems — the EMALS, AAG, weapons elevators, and dual-band radar (DBR) — “stand out as the most significant challenges expected to affect the ship’s flight operations.”

Despite these lingering problems, the crew of the Ford last month seemed amped to actually take the advanced carrier out on the high seas to see where its next-generation capabilities actually fit into the grand web of America’s power projection abroad.

While the Ford may not be totally ready for battle, it can clearly still fly its battle flag. And hey, nothing says power projection like a warship named for America’s only unelected president!