Here are your good, bad, and painful stories about military dentists

Our cup runneth over with tales that will make you want to brush your teeth three times a day. 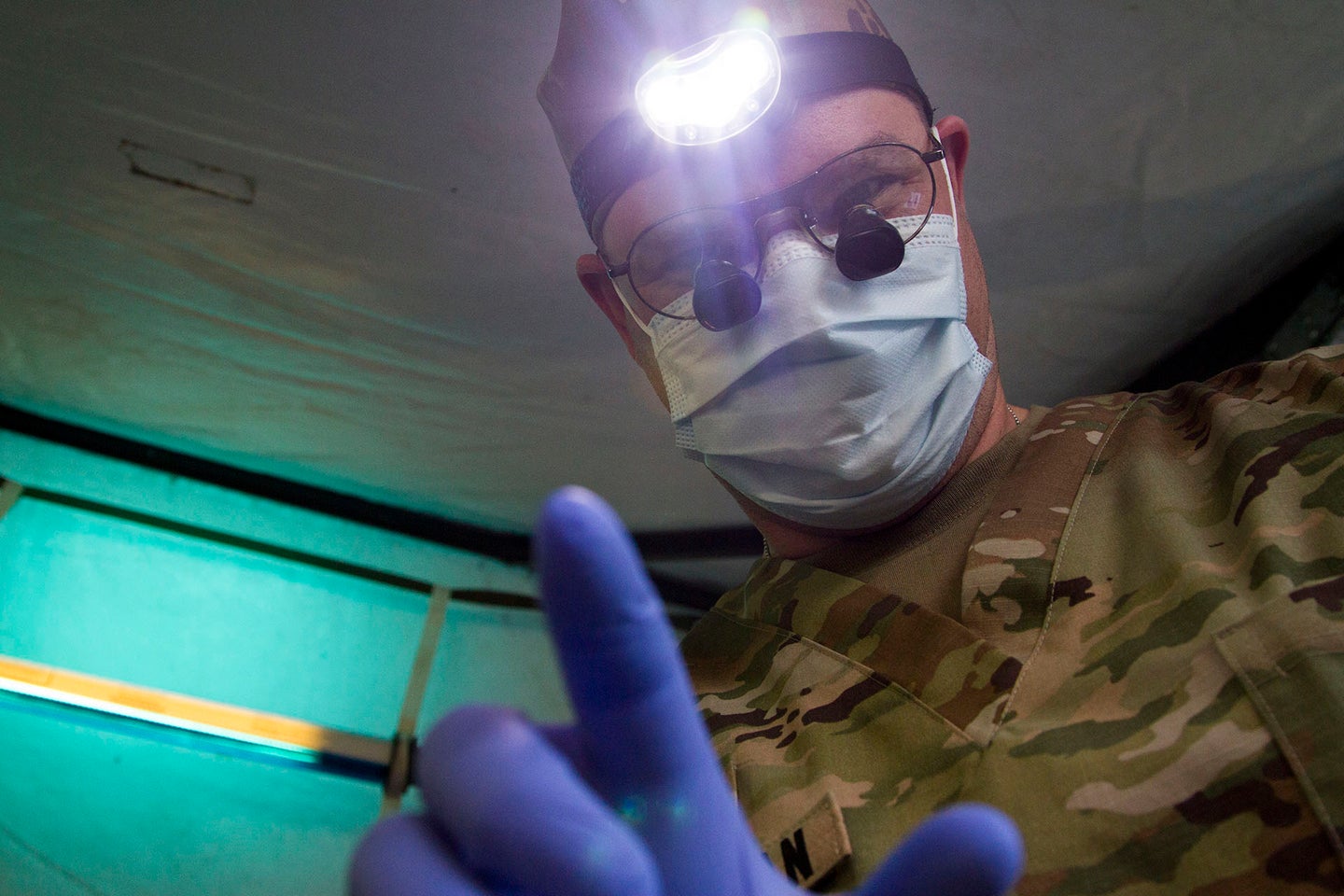 An Army dentist prepares to work on a patient as part of a medical readiness training exercise. (U.S. Army photo by. Sgt. Anshu Pandeya).
SHARE

What can go wrong when troops go to the dentist? A lot. In fact, dental horror stories are just as good as DD-214s for proving someone was in the military.

Task & Purpose asked readers to share their good, bad, and painful experiences with military dentists. You responded, and our cup runneth over with tales that will make you want to brush your teeth three times a day.

Several people who shared their stories about military dentists described being treated by people who showed indifference to their pain and discomfort. A former soldier said the Army dentist who removed his infected tooth had the bedside manner of a drill sergeant. To make matters worse, everyone had to run to a bunker in the middle of the procedure because the base came under attack.

A Navy officer said she was physically held down by two male dentists while getting her wisdom teeth removed, forcing her to relive her trauma as a sexual assault survivor. The men made fun of her for having a panic attack.

And Peter Schaub, a former Marine lance corporal, remembered going through gas chamber training right after having his wisdom teeth taken out. He coughed so hard that his stitches burst. Since he was in the field, there was nothing the corpsman could do.

“My jaw started to ache constantly, and my cheeks swelled even more than before,” Schaub recalled. “Doc thought that maybe some CS crystals had gotten into the wounds, so he gave me a bottle of rubbing alcohol to gargle with a couple times a day.”

While many readers had difficult experiences with military dentists, not all the responses that Task & Purpose received were horror stories. Retired Air Force Lt. Col. Laszlo Varju said the dentists he went to while stationed at Ramstein Air Base, Germany, were consistently outstanding.

Varju also said he had a dental bridge put in while he was in the military that is still in excellent condition 23 years later.

It is also worth noting that military dentists treat service members in warzones and other spartan environments. They work under fire and under hazardous conditions.

Former Navy Cmdr. David Haugen has treated patients in dusty tents with portable equipment that does not always work well. Sometimes, military dentists are forced to use material that has been degraded by extreme temperatures because it was stored in hot CONEX containers.

“I feel the vast majority of military dentists do good work and we all took the Hippocratic Oath to do no harm but I can understand why some patients have these stories or experiences of their time in a military dental chair,” said Haugen, who is currently in the Minnesota Air National Guard.

Haugen’s first experience as a military dentist was at Recruit Training Command, Great Lakes, Illinois, where sailors go for boot camp. Many dentists at boot camp are recent graduates from dental school, where they typically see between two and four patients a day, so they have little real-world experience to prepare them to treat the constant crush of new recruits, some of whom have not had dental care before.

“Boot camps try to get as much urgent dental care done as possible before the recruit heads off to the next duty station which may or may not have a dentist,” Haugen said. “So, it is like a herd mentality with the patient base: Get ‘em in; get ‘em out dentally ready.”

Treating patients aboard ships can also be challenging because the dentist chair is not bolted to the deck – and neither is the dentist, Haugen said.

“We as ship dentists would joke that we would let our drill follow the rolling sea,” Haugen said.

Military dentists go through extensive training from the Uniformed Services University of the Health Sciences, which offers a variety of programs that are accredited by the Commission on Dental Accreditation, said Army Maj. Charlie Dietz, a Pentagon spokesman.

“USUHS provides a master’s degree to those dental residents who are in their residencies,” Dietz said. “Those educational and professional standards are rigorous.”

Retired Navy Capt. Martin Clark, who spent more than 40 years in the Navy Dental Corps, said that military dentists are trained in the same dental schools as their civilian counterparts, are licensed through the same channels, and must meet the same requirements. They also use the same equipment and materials as civilian dentists.

Clark also noted that service members have some advantages over civilians when it comes to dentistry. For example, military dentists are required to wear gloves and masks and be vaccinated for the novel coronavirus (COVID-19).

However, former Army Sgt. John Espinoza noticed a major difference between military and civilian dentistry when the filling his Army dentist had given him cracked and fell off after two months.

Espinoza said he went to a civilian dentist, who was astounded at the amount of coating that had been placed on his tooth, which likely led to the filling coming off. “The civilian dentist just nodded it off as ‘typical, shoddy work,’” Espinoza said.

Still, service members have an advantage in the range of treatments available, Clark said, In the private sector, dentists only provide as much care as their patients can afford. Military dentists, on the other hand, provide the same level of treatments to troops, regardless of how much money they make.

“I have seen PFC’s [privates first class] without two nickels to rub together get $50,000 worth of dentistry,” Clark said.

In the end, it’s important to remember that military dentistry is an inherent part of military life, which is based on the concept of sucking it up to meet mission requirements.  Not all military dentists are bad, but the sheer number of excruciating stories shared by readers suggests the dental corps has a lot of room for growth when it comes to pain control.

In the meantime: Brush – for the love of God – brush. And floss.