Breaking through a car windshield? Combat boots not required. 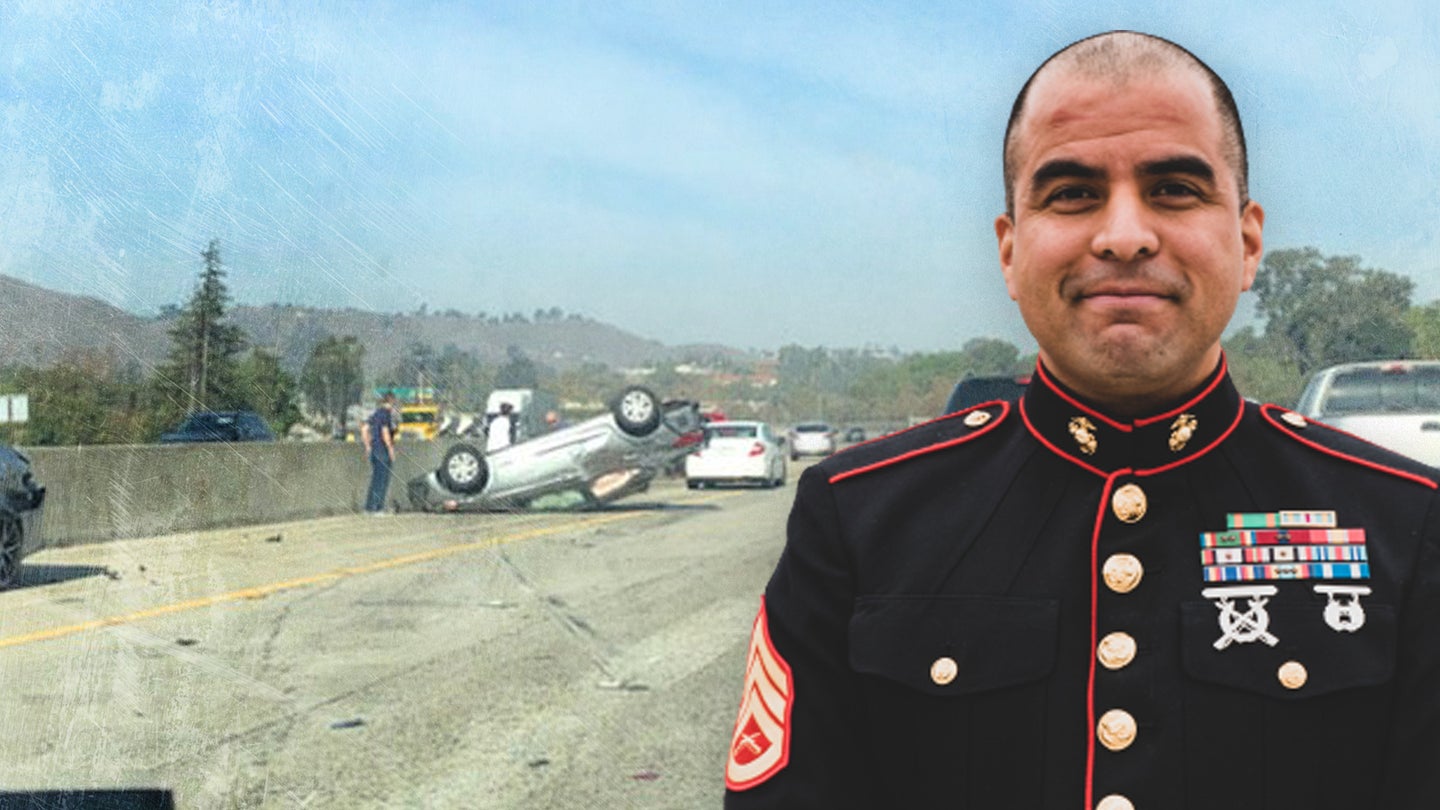 A photo composite showing Staff Sgt. Joseph Maldonado and the scene of the accident where he pulled a man from a vehicle on Dec. 6, 2021. (Photo courtesy of Joseph Maldonado/U.S. Marine Corps photo).
SHARE

Sometimes, the morning commute involves more than just griping at the traffic and the people who won’t let you merge. Earlier this month, one Marine Corps recruiter ended up kicking through a car windshield with his bare foot to rescue a man trapped in an overturned vehicle.

Staff Sgt. Joseph Maldonado, a recruiter out of Fullerton in Orange County, California, was driving to work, having just dropped his child off at daycare, on Dec. 6 when he saw a three-car pileup blocking traffic along the highway.

“My Marine instincts just kicked in,” said Maldonado in an interview with Task & Purpose.

Two other bystanders were helping an older woman, but one man remained stuck in a Mercedes.

“When I pulled over in front of the guy’s car I saw that it would be difficult to get him out since the vehicle was on it’s side. I knew the windshield couldn’t be broken while he was still dangling in the driver’s seat,” said Maldonado in a Marine Corps statement on Monday.

Maldonado picked up a knife from one of the bystanders and started to cut the man out of his seat. Making his way into the car, Maldonado then realized the man appeared to be having a seizure. Having cut the man free from his seat belt, Maldonado then looked for a way to get him out of the vehicle.

“I told him I was going to get him out,” said Maldonado. “He was a little disoriented, I just told him ‘I’m not a police officer, I’m just here to help.’”

Maldonado then began kicking through the windshield of the car. Lacking any Marine Corps-issue combat boots, however, Maldonado had to perform the task in the sandals he had been wearing for the drive to work, eventually finishing the job barefoot.

With the help of two other men, Maldonado pulled the trapped driver through the driver’s side door.

“Even with the man in his state I ensured to tell him what we planned to do,” said Maldonado in the Marine Corps statement. “I told him, hey I’m going to use my body and get you out of here.”

Following the rescue, Maldonado returned to the vehicle to retrieve the man’s personal belongings, including insulin and diabetes medication, as well as his sandals. A police officer arriving on the scene was able to administer the medication and keep the man in stable condition until paramedics arrived.

Maldonado’s actions are in keeping with a long tradition of service members stepping up at a moment’s notice and going above and beyond to help out those in need. From Marines in their dress blue uniforms rushing to assist the passengers of a car trapped in rising flood waters near Arlington National Cemetery, to the Airman whose late-night energy drink run ended up saving a life, and the Marine who helped pull an infant child from a burning car, it’s the kind of commitment to helping others that Maldonado fully lived up to.

And, a couple of weeks later, despite a shard or two of glass remaining in his foot, it hasn’t stopped Maldonado from passing his latest Marine Corps combat fitness test.

“I did what I did because it’s what we do as Marines. I saw the accident and heard the man yelling and knew I could be of help,” said Maldonado in the Marine Corps statement. “I saw where I could help and simply did something about it.”