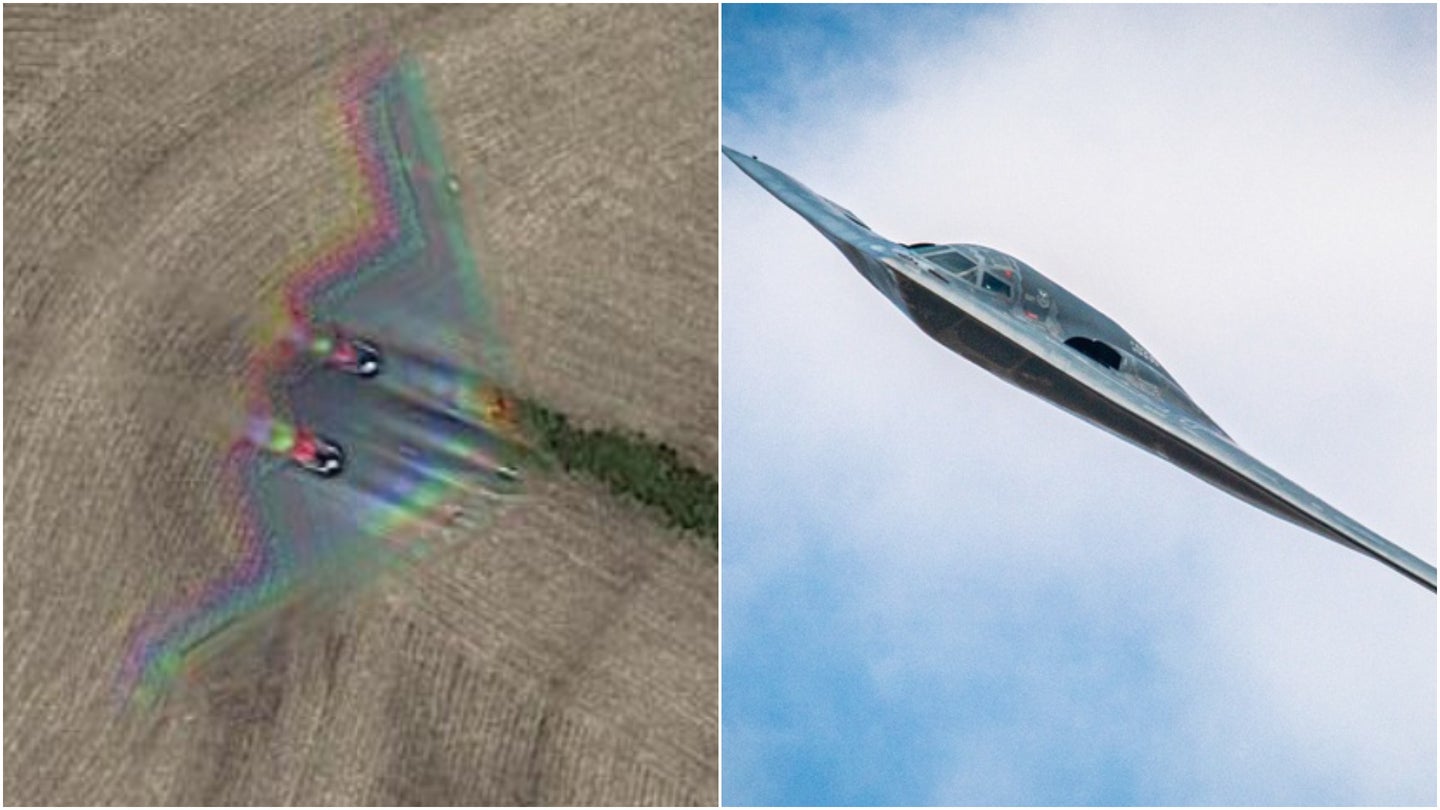 The 172-foot-wide B-2 Spirit stealth bomber, which costs nearly $2 billion in today’s dollars, can sneak past enemy air defenses with the same radar signature as a small bird, but you can also spot it on Google Earth as long as you have an internet connection.

“It’s pretty funny, you’ve got a stealth bomber flying over a farmer’s house, into his field, it looks like he’s a crop-duster,” said the host of My Garden Channel, a YouTube channel that’s usually dedicated to gardening and plant care. But on Monday, the channel posted a video showing how viewers can use Google Earth to spot the stealth bomber for themselves.

A screenshot of the bomber flying over a field in Missouri took off on Reddit, where it received more than 109,000 upvotes and caught the attention of airmen on the unofficial Air Force subreddit.

“What are you trying to say? I don’t see anything,” joked another.

“Looks like a weather balloon to me,” wrote a third, referring to when the Army announced in 1947 that it had found a “flying disc” near Roswell, New Mexico, only to later retract the statement and say it was a weather balloon.

Unlike a UFO though, it’s not surprising to see a B-2 bomber flying over Missouri. After all, the only B-2 base in the world is at Whiteman Air Force Base, just about 20 miles south of the spot the aircraft was spotted flying over on Google Earth. (A direct link to the Google Earth image can be found here.)

Still, with its flying-wing design, its ninja-like ability to penetrate enemy air defenses, and its reputation for flying all the way around the world to kill ISIS fighters in the dead of night, the aircraft gives an aura that makes spotting it in daylight with a simple tool like Google Earth or Google Maps a real treat.

“The B-2 is designed to fly into the maelstrom when Los Angeles is burning and GPS signals have been jammed,” wrote William Langewiesche in a 2018 article for The Atlantic about a B-2 mission to bomb ISIS fighters in Libya. “It is made to defeat the world’s most advanced air-defense systems. In addition to its conventional navigational capabilities, it has autonomous systems that operate independently from any ground- or space-based transmitters.”

Besides being deadly, it’s also cozy: the Spirit has a toilet, a microwave, a few coolers for storing snacks, just enough room for one of its two pilots to lie down and take a catnap, and even “extremely comfortable” cockpit seats, Langewiesche wrote.

Still, the Atlantic writer questioned the U.S. government’s decision to use the B-2, each of which cost $44.27 million a year to maintain as of 2018. That makes it the most expensive aircraft to maintain in the Air Force inventory, and it was used to bomb no more than 100 men camped in the desert in a country that does not even have air defenses.

“Bombing ignorant gunmen camped out in a desert of a non-country is a far cry from launching an attack against a modern military adversary,” Langewiesche wrote. “But the high cost of the mission was perhaps an attraction by bureaucratic if not military logic—you may lose money if you don’t spend it—or the B-2s might have just needed some work to do.”

Whatever the reason for using the B-2 over Libya, concepts like stealth and strategic bombing are returning to the fore as the Air Force prepares for a possible war with China or Russia. In fact, the service wants to spend an estimated $203 billion developing the B-21 Raider, a new flying wing strategic stealth bomber that closely resembles the B-2 and is designed to replace the older aircraft.

“Designed to operate in tomorrow’s high-end threat environment, the B-21 will play a critical role in ensuring America’s enduring airpower capability,” the Air Force wrote on its website about the Raider.

Part of the reason why the Air Force is putting so much money into the B-21 is because it wants to buy at least 100 of the bombers. By comparison, only 21 B-2s were built. One of those was destroyed in a non-fatal crash in 2008, and another was damaged in September after sliding off the runway at Whiteman. The Air Force estimates each B-21 will cost about $639 million in 2019 dollars.

So perhaps someday we will also see images of B-21s mid-flight on Google Earth. Eagle-eyed readers may have spotted a red-and-blue blur effect on the image of the B-2. According to NASA, that’s because satellite images are different from typical photographs. While photographs are made “when light is focused and captured on a light-sensitive surface,” a satellite image “is created by combining measurements of the intensity of certain wavelengths of light, both visible and invisible to human eyes,” NASA wrote online.

Most visible colors can be created by combining red, green and blue, so satellites combine red, green and blue-scale images to get a fill-color image of the world, NASA explained. However, Newsweek pointed out that aircraft in flight may blur the colors due to how fast they are moving.

“If you put on the old 3D glasses with the red and blue lenses you can actually see this in 3D. Try it,” wrote one cheeky commenter on the Air Force subreddit.

It just goes to show that capturing a Spirit is difficult, but with a sky full of satellites, an internet connection, and a little bit of luck, anything is possible.