The Navy is rusting away thanks to a crushing deployment cycle

'Rust is found on ships that have high op tempo.' 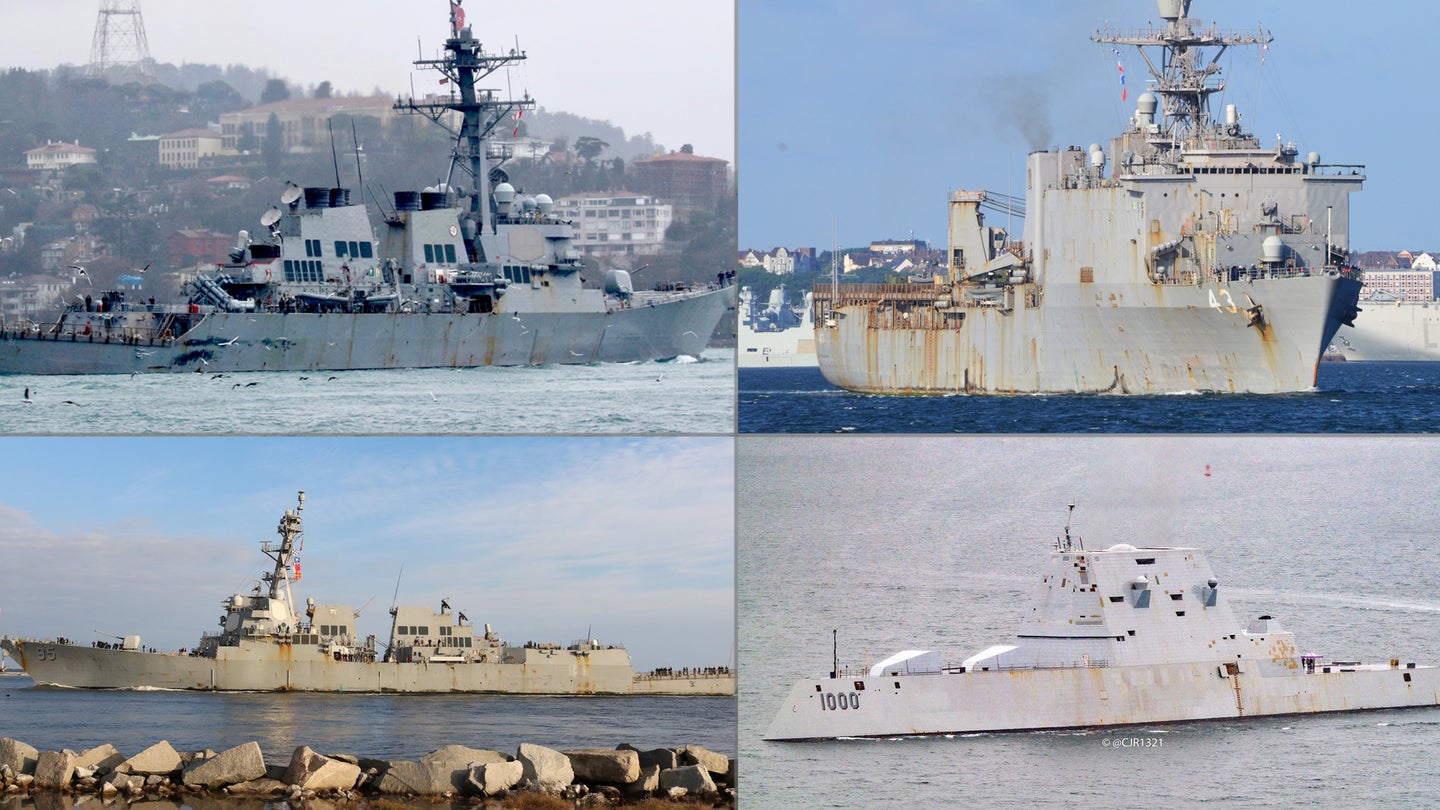 For decades, the Navy has pushed its ships and sailors to the breaking point in order to maintain a constant presence around the world, and now several Navy vessels are in such dire need of maintenance that their unseaworthy appearance is an embarrassment to the United States.

The Navy spends billions of dollars a year fighting corrosion; yet ship watchers have posted images for years of Navy vessels covered in running rust, including the destroyers USS Curtis Wilbur and USS James E. Williams as well as the dock landing ship USS Fort McHenry.

The outward signs of corrosion on Navy ships are visible evidence that the service’s operations tempo is so crushing that it has become difficult to do all of the necessary maintenance needed to keep rust at bay.

This is hardly an isolated incident. As reported by The War Zone on Dec. 10, pictures taken by Twitter user @cjr1321 showed the USS Zumwalt, one of only three DDG-1000 destroyers, with rust along its hull. Several of the Zumwalt’s radar-absorbing tiles, which are meant to make the ship harder to detect, also looked rusty. (A Navy official noted that the Zumwalt’s radar-absorbing tiles cannot just be painted when they become discolored because they are highly advanced and require special maintenance.)

“The harsh environment in which we operate degrades our ships, and our sailors work hard to address corrosion along with all the maintenance and crew training required to sustain our Navy’s warfighting readiness,” Schwegman said.

The Navy provided Task & Purpose with pictures of the Zumwalt taken on Dec. 16 that showed the ship in much better condition than the vessel appeared in images widely shared on Twitter.

When asked if Defense Secretary Lloyd Austin is concerned with how the Arleigh Burke and Zumwalt look, Pentagon spokesman John Kirby did not answer directly.

The Navy’s rust problem is indicative of a wider readiness issue facing the service, said Becca Wasser, of the Center for a New American Security think tank in Washington, D.C.

“Rust is found on ships that have high op tempo,” said Wasser, a fellow with CNAS’ defense program. “Constant operations really means that there’s less time for the necessary maintenance and upkeep.”

The non-stop operations also take a toll on the sailors who are constantly underway, she said. Not only is it harder for sailors to stay current on their qualifications if they are always at sea, but longer deployments also mean that sailors are spending more time away from their families.

In October 2020, the destroyer USS Stout finally returned home after a record 215 days at sea. The ship did not have a port call for eight months because of the COVID-19 pandemic. As a result of the marathon deployment, both the ship and its crew came under great strain.

“So, if you want to address rust on ships, what’s the answer? It’s operating less; maintaining more,” Wasser said. “It’s recouping readiness, and I think that’s really the heart of the issue here. It’s about asking the hard question of: Why is the Navy operating as much as it constantly is.”

As of Thursday, 77 out of the Navy’s 295 deployable ships were underway, according to the Navy’s official website. That means roughly 26% of ships classified as deployable are currently on operations.

In the past, combatant commands have driven the high operations tempo by frequently asking for more Navy ships in their theater of operations to deter adversaries, Wasser said. But recently, the Pentagon has had some success pushing back on those combatant command requests.

Another issue is how the Navy sees its role within the entire U.S. military, Wasser said.

“At this point in time, the Navy – more broadly – seems to have the belief that they need to have constant forward presence, which they get from continuous operations, in order to deter; in order to be present and sort of wave the flag, make a difference, and do what the Navy is supposed to do for the joint force,” Wasser said.

“I would argue that that ends up being a very expensive theory of deterrence and one that ultimately comes at the cost of readiness,” she continued. “And readiness is truly what we need to preserve should there be a potential future conflict against an advanced adversary like China.”

During the 1990s, the Navy embraced the idea that constantly having ships forward deployed could prevent conflicts from happening, Robert O. Work, who served as undersecretary of the Navy from 2009 to 2013, recently wrote in “Proceedings,” which is published by the U.S. Naval Institute.

But as the fleet shrank from nearly 600 vessels at the end of the Cold War to 336 ships in 1999, the military failed to match the Navy’s missions with its reduced resources, wrote Work, a retired Marine colonel who also served as deputy defense secretary from 2014 to 2017. Military commanders continued to request Navy and Marine forces for their areas of operations.

“Slowly but surely, the Navy’s culture changed from its Cold War ‘readiness-centric’ culture to a peacetime ‘deployment-centric’ culture,” Work wrote. “In the process, the material readiness of the force began a long, inexorable decline, particularly in the surface warfare community. More worrisome, the overall readiness of Navy ‘surge’ forces, expected to deploy should war come, began to decay.”

The operations tempo may not be the only factor driving the Navy’s rust problems. While the Navy is clearly overtasked, commanding officers also have a responsibility for making their ships look seaworthy, said retired Navy Capt. Brent Sadler, the senior fellow for naval warfare and advanced technology at the conservative Heritage Foundation think tank in Washington, D.C.

“I do not attribute overwork or too thinly crewed ships as to the cause of the rust we are seeing on ships coming out of the yards, on deployment or conducting local operations near their homeport,” said Sadler, a former submariner. “The issue is too widespread and seems to be a lack of standards.”

Rather than putting the blame on rank-and-file sailors and individual ship commanders, Sadler said that commanding officers may not be getting the support they need from their leadership to meet the Navy’s standards. He noted that sailors are actually happier when their skippers run a tight ship.

“A hard working and devoted crew taking care of their home/ship actually has the highest camaraderie and morale, but sometimes it takes a bit of hard work and bitching to get to that point,” Sadler said. “That is after all what we should expect of our naval leaders.”

Update: This story has been updated to include before and after images of the USS Zumwalt taken on Dec. 9 and Dec. 16, respectively.