Why military officers are commanding fewer enlisted troops than ever before

Military-wide, there is one officer for every 4.7 enlisted service members. 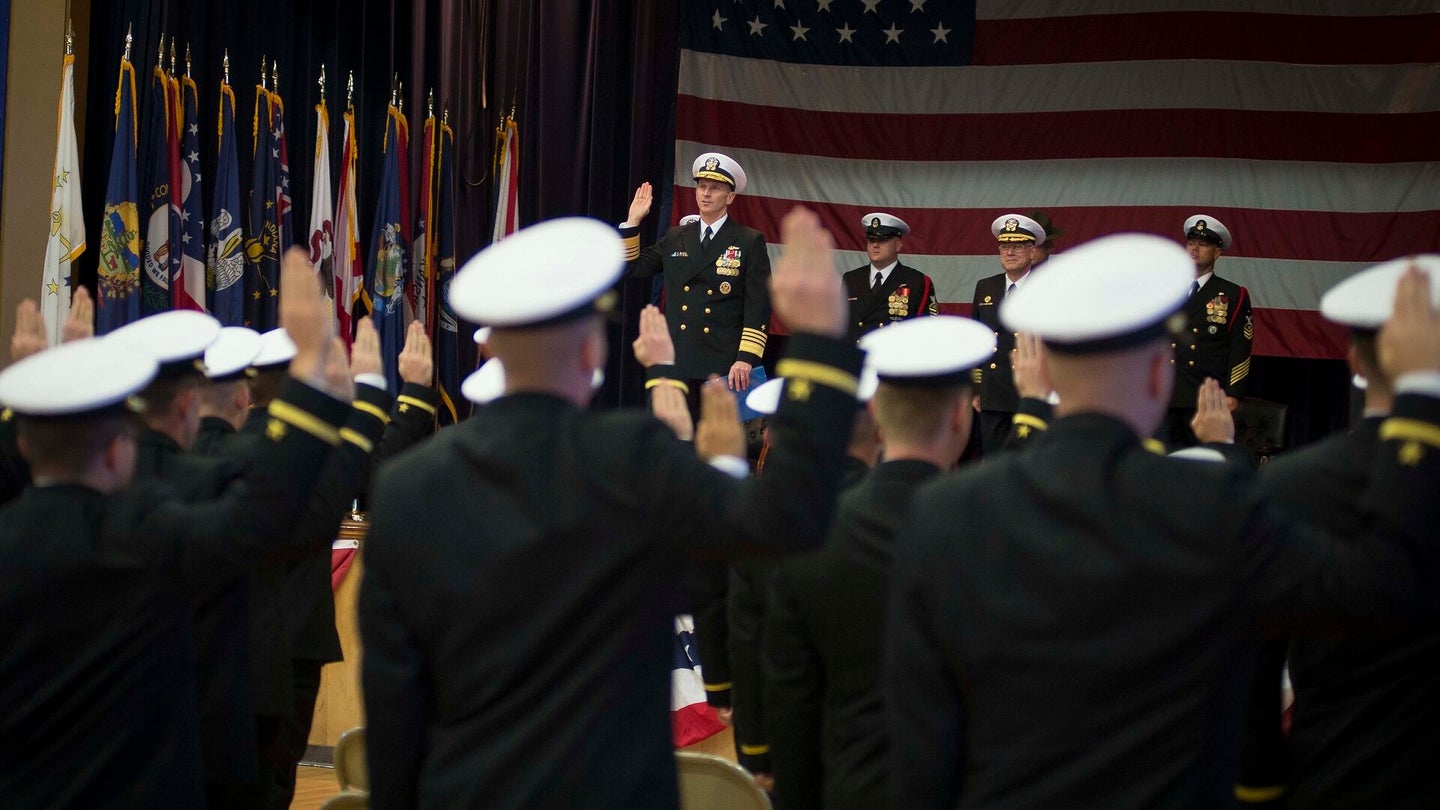 Rejoice, salty enlisted service members, for you were right all along: the number of officers in the U.S. military is too damn high!

A recent piece of analysis from a non-profit government watchdog group suggests that the U.S. military is too top-heavy, and that having too many commissioned officers leads to needless bureaucracy and drives up the taxpayer burden with officer payrolls.

The U.S. military is “larded with far more pencil-pushers than trigger-pullers,” wrote Mark Thompson, national security analyst for the Project on Government Oversight (POGO), on Wednesday.

For the rank and file, POGO’s findings have an appeal, especially for those who resent officers for generally receiving lighter punishments for wrongdoing, not knowing what they’re doing, and for having complete control over the lives of their subordinates.

The problem is that, based on trends in U.S. history, a lower enlisted-to-officer ratio might actually be a good sign for the future of the military.

Thompson cites two recent reports from the Congressional Research Service which record how many officers and enlisted service members make up the U.S. military. As of Dec. 1, enlisted members make up 82% of the armed forces, the first report said, while officers (including warrant officers) make up the remaining 18%.

By comparing the number of officers in the respective services to the number of enlisted, Thompson found that the ratio of enlisted troops to officers was surprisingly low. For example, in the largest branch of the military, the Army, there are 388,564 active duty enlisted soldiers and 93,443 officers, which translates to a ratio of roughly four soldiers to every one officer. In the second-largest branch, the Navy, there are 287,179 enlisted sailors and 56,044 officers, so there’s about five enlisted sailors for every one officer. Military-wide, the ratio is 4.7 enlisted troops to every officer. That might come as a surprise when, for example, the Department of Defense website says that the smallest Army unit commanded by an officer is a platoon of about 36 soldiers.

“It is commonplace for newly minted second lieutenants, fresh out of college Reserve Officer Training Corps (ROTC) or other commissioning sources, to be placed in charge of 50 or more service members and thousands—or in some cases millions—of dollars’ worth of equipment,” wrote the U.S. Department of Health and Human Services in a 2010 report on military culture.

The number of enlisted troops an officer usually commands depends on the type of unit they’re assigned to. For example, Air Force squadrons are typically commanded by lieutenant colonels or majors, but they “come in all sizes ranging from 7 personnel to over 600 personnel,” according to the Center for Strategic and International Studies.

Still, Thompson argued that the ratio of enlisted troops to officers is getting out of hand, and he’s not the first to say so. On Feb. 3, 1978, then-Rep. Charles E. Bennett (D-Fla.), had the Government Accountability Office (GAO) look into “the belief that there is waste in sustaining the officer corps (at its higher rank level) and the possible link between military officers and industry which could lead to intolerable wastage,” GAO wrote in its response that March.

The GAO found that the average ratio of enlisted to officers changed from 7.1 from 1954 to 1964, up to 7.5 in 1968, during the height of the Vietnam War, and down to 6.5 by 1977. However, the reason for the falling ratio is more complex than just officers wanting to spread through the military like locusts, the GAO argued.

“More than 30,000 military positions (mostly enlisted) were converted to civilian positions and many functions previously performed by enlisted personnel are now being performed by contractors,” GAO wrote. The total number of officers also fell from 321,000 in 1973 to 274,000 in 1978, GAO wrote.

Why has the enlisted-officer ratio fallen over the decades? RAND studied the question in depth and came to the conclusion that technology is one of the major factors that changes the ratio.

“New technologies tend to be officer heavy when first introduced because they are initially complex,” RAND wrote in a 1996 report. “Technological innovations also initially require a larger, officer-rich, support tail to provide service and supply.”

For example, the ratio of enlisted to officers was as high as 20 to 1 during the Spanish-American war, where ships were fired by coal, artillery was still drawn by horses and when “the large mass of soldiers were infantry riflemen.” RAND wrote.

In short, it “was an era where brawn still mattered more,” RAND explained.

However, with new technology like “the airplane, the tank, the radio, steam, and petroleum, work began to shift toward more use of [the] brain, which both specialized the enlisted force … and led to proportionally more officers,” RAND continued. “Also, the need to coordinate, integrate, and sustain military forces numbering in the millions and not the tens of thousands led to a substitution of officers for enlisted beyond the simple addition of more officers.”

In fact, the concept of a “military occupational specialty” exploded during World War II, when millions of enlisted people were sorted into hundreds of specialized roles in order to keep the technologically-sophisticated American war machine humming smoothly, RAND noted. The need for specialization and education only increased with the introduction of the all-volunteer force in 1973.

“Over time, enlisted jobs have shifted to higher skills, to higher grades, and to longer required tenures,” RAND wrote. “As in the private sector, jobs have gotten ‘better,’ which requires entrants into and members of the workforce to have greater ability and motivation.”

That trend has continued to the present day, especially as the military tries to up its cybersecurity game and invest in a mind-boggling array of new technologies: from 3-D printing to drone swarms and joint all-domain command and control.

Thompson of POGO raised concerns that the military has become full of pencil-pushers, and he’s right, because in some ways that’s what’s bound to happen given the conditions of a technologically-driven all-volunteer force.

“People will harken back to World War II, but we have a vastly different military recruitment model now,” said Katherine Kuzminski, senior fellow and Director of the Military, Veterans, and Society Program at the Center for a New American Security. “We’re an all-volunteer force, not draft-based, so we should expect to see not necessarily more officers, but a much smaller military, so the fact that we see this ratio change makes sense.”

Based on these trends, having a lower ratio of enlisted service members to officers may not necessarily be a bad thing, because it indicates the military is developing new specialties, which means it has new ways of destroying America’s enemies. The Department of Defense is scrambling to develop those specialties. For example, the Marine Corps recently proposed to waive its boot camp requirement for select recruits so it can attract professionals with advanced skills in much-needed areas, like cybersecurity, to its ranks.

“The rapid rise in importance of the cyber domain, for instance, has challenged us to find creative ways to quickly build critical skills at mid-career and senior levels,” wrote Commandant Gen. David Berger in his new talent management plan. “Unless we find a means to quickly infuse expertise into the force – at the right ranks – I am concerned that advances in artificial intelligence and robotics, among other fields where the speed of technological change is exponential, will force us into a reactive posture.”

For example, Berger imagined a Marine who left active duty as a captain or a corporal rejoining as a lieutenant colonel or gunnery sergeant “after spending 5-7 years working in a cyber or IT field where the service currently lacks capacity,” Berger wrote. “With the right education and experience, that same corporal might also be eligible to return as a mid-grade or senior officer.”

Still, that doesn’t mean there’s no such thing as too many officers, especially higher up the rank structure. Kuzminski pointed out that the proposed 2017 NDAA included a provision that would reduce the number of general and flag officers by 25 percent.

“This provision is necessary because the size of the general and flag officer corps has become increasingly out of balance with the size of the force it leads,” the proposed bill summary said. “Over the past 30 years, the end-strength of the joint force has decreased 38 percent, but the ratio of four-star officers to the overall force has increased by 65 percent. Especially at a time of constrained defense budgets, the military services must right-size their officer corps and shift as many personnel as possible from staff functions to operational and other vital roles.”

The provision did not pass, but RAND still conducted an analysis for how the military might cull its generals and admirals. RAND found that, as of 2018, the military had 1,113 generals and flag officers, of whom 38 had four stars, 149 had three, 389 and two and 537 had one. Kuzminski explained that, for every four-star officer, there is a pyramid of staff and high-ranking officers beneath him or her. Not only is it expensive to pay for all those stars, but it can also have the effect of slowing down missions.

“At the combatant command level, yes, bureaucracy has been a concern,” Kuzminski said. “Positions that used to be two or three stars are now four stars, which creates a whole pyramid under them and expands exponentially the layers between the person requesting authority and the person who has it. If I have to go through 25 layers of bureaucracy rather than three, then that makes a difference in mission accomplishment.”

One Marine colonel put it even more bluntly. The increase in the number of general and flag officers “represents ‘rank creep’ that does not enhance mission success but clutters the chain of command, adds bureaucratic layers to decisions, and costs taxpayers additional money from funding higher paygrades to fill positions,” wrote Col. Gregory McCarthy in a 2017 essay for Joint Force Quarterly.

Both McCarthy and RAND called on the Department of Defense to keep better track of how many general and flag officers it has, and make sure each position is justified.

“The burden of proof should be on the Services to justify [general officers / flag officers] outside of senior leadership and commanders of large line organizations,” McCarthy wrote. “Services must be required to identify not which GO/FOs they want to give up but which ones they want to keep.”