Why ‘Battlefield: Bad Company 2’ Remains The Greatest Military Shooter Ever Made

I’ve played my fair share of first-person shooters, but few can stack up to the glory of Battlefield: Bad Company 2.... 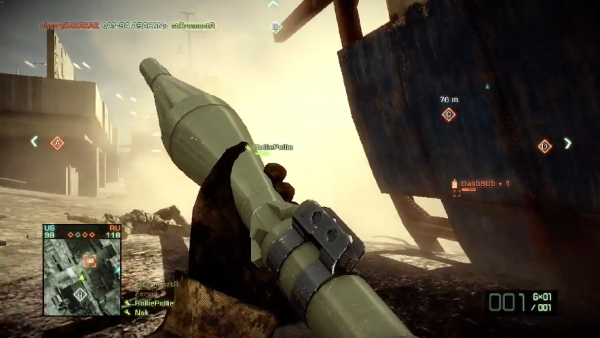 I’ve played my fair share of first-person shooters, but few can stack up to the glory of Battlefield: Bad Company 2.

I was first introduced to the franchise back in the early 2000’s when Battlefield 1942showed up. Running around Wake Island trying to fend off a Japanese invasion was a paradigm shift from previous non-sandbox shooters. Unlike other World War II games at the time, you weren’t just playing out a scripted set of sequences that ended in victory; if you thought your team needed to take down those Japanese fighters, then by God you would find the nearest anti-air gun and get to work.

The open world of Battlefield allowed for complex group tactics and strategy at its best, and mayhem at its worst. The game may have been arcade-style in nature, but it taught me how proper group communication and a sound strategy will beat a disorganized team every time.

Running around in the sand in BF1942EA DICE

This marvel of a game blew my mind, its successor was even better. Battlefield 2was still kicking as the modern shooter standard back when I signed up for four years of Uncle Sam’s wild ride. They even had a Battlefield 2 PC setup to drain your bank account at the on-base arcade at Lackland Air Force Base in Texas when I was stationed there.

High-octane follow-up Battlefield 2142 gave us all a taste of the future of war — which was pretty similar to our current ones, just with more drop pods inserting troops everywhere, and the occasional hover-tank or walking battle-mech. Getting off work at Tinker Air Force Base for much of 2008 simply meant moving from the squadron office to fighting in the climate change-ravaged southern European battlefields of BF2142.

After this, Battlefield languished in development hell. The original Battlefield: Bad Companyappeared for console gamers, but as a stalwart defender of the PC, this held as much appeal to me as an omelet MRE. After trying the Xbox beta, I found it suffered from the main flaw of shooters on consoles: the controller just doesn’t cut it for getting sweet, sweet, headshots.

With few options, I was forced to suffer through years without a proper graphically impressive open world Battlefield game — until I returned from the hinterlands of Afghanistan to discover that Battlefield: Bad Company 2had appeared on PC. Somewhat tentative and fearful that Bad Company 2 was merely a lousy port of a console game, I jumped in with low expectations — low expectations that were detonated in a cavalcade of gunshots, tracers, missiles, and collapsing buildings

Bad Company 2 had fully destructible environments. Matches would start with an entire map filled with buildings, villages from faraway lands faithfully recreated in the Frost Engine to fight from flag to flag taking and holding objectives. And by the end of the match, most of these buildings would be completely flattened. Prior to this, and even since, it's rare to have a game where you can deal with the problem of a sniper by shooting a Carl Gustav at the rough vicinity of the wall behind which the sniper hides, and eliminate the threat (plus, there is no Law of Armed Combat to keep you from simply leveling every building you consider a threat. Possible squad holed up in that corner store? Better pop open the mortar and start shelling it, just in case).

But the most important I noticed the first time I fired up Bad Company 2, was how accurate the sound design was. Explosions near and far are rendered faithfully, and the changing sounds of weapons fire at different distances are amazingly accurate. I discovered that Swedish game developer DICE actually sent their audio team to work with the Swedish military to record the sounds in the game; they even mic’d up an entire military exercise.

The efforts of the DICE team carried over to the follow-up games — but the pure destructibility did not. Although the series brought back limited destructibility after Battlefield 3, it wasn't nearly at the same level as the golden age of Bad Company 2.

With Battlefield 5around the corner, we can only hope that an Andrew Jackson-style total war campaign will remain an option. But until then I think I may boot up Battlefield: Bad Company 2 and bust a few holes in some walls.

Disagree? Tell us your favorite military shooter in an email or the comments below.