Review: ‘Call Of Duty: WWII’: The Good, The Bad, And The Overdone 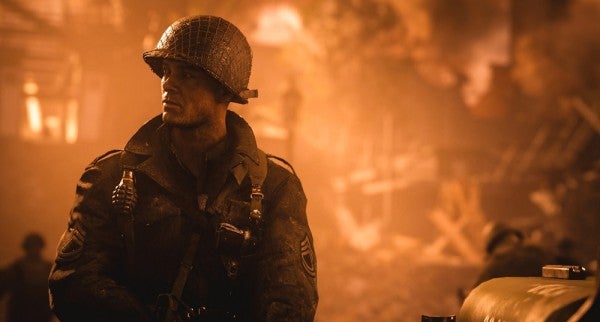 Just before Veterans Day, Activision released Call of Duty: WWII, the latest title in a flagship military first-person-shooter series that’s birthed dozens of games since 2003. This installment was widely hyped — and anticipated — as a return to the franchise’s roots. Needless to say, we here at Task & Purpose were eager to review it.

In living rooms and barracks across the country — plus at least one NFL locker room — gamers and first-person shooter fans dove into the Second World War, in high def, on Nov. 3 with the game’s release. Eager players climbed into Higgins Boats, ready to hit the beaches of Normandy and push on to the Rhine in the game’s single player campaign. Others skipped past the singleplayer story and jumped right into multiplayer, running and gunning through a host of maps based on iconic World War II battles.

By day three, after plowing through the campaign and leveling up enough in multiplayer to realize that submachine guns account for almost all the in-game kills, I switched back to playing Battlefield 1, relieved my copy of CoD: WWII was a screener just for this review. There’s no way I would have shelled out $60 for it, although I might’ve paid 30 bucks just to play the campaign. Maybe that was just me, but I doubt it.

This isn’t to say that Call of Duty: WWII is wholly bad. The campaign is deeply engaging, and the game’s multiplayer delivers on its reliable rinse and repeat format: run, shoot, die, respawn, and die again. But overall, it just isn’t up to snuff with what many gamers expect from a first-person shooter.

Let’s start with the good: The campaign

In Call of Duty: WWII, you step into the combat boots of Pvt. Red Daniels (Brett Zimmerman) on June 6, 1944, just before the invasion of Normandy. As you make your way onto the beach — blowing barriers with bangalores and storming bunkers with flamethrowers — you’re introduced to the glib Pvt. Zussman (Jonathan Tucker); the stoic Lt. Turner (Jeffrey Pierce); and Sgt. Pierson, the unit’s irascible NCO, played by Josh Duhamel of Transformers fame.

The missions are jammed with all the CGI-inspired gore the developer, Sledgehammer Games, can muster, but it’s the characters that make CoD: WWII’s campaign enjoyable, because they feel real — well, realish. Your squadmates don’t come across like a batch of in-game tutorials with soldier avatars, telling you how to use the gamespace gadgets you acquire. These characters have feelings, quirks, and distinct personalities that occasionally put them at odds in dramatic — if cliche — ways.

You know, sergeant, it would behoove you to stop trying to get your men killed. Spolier: He reenlists at the end of the game.Image via Activision

When Sgt. Pierson disregards Lt. Turner’s orders to wait for reinforcement and takes an under-strength squad to assault a German position, the unit suffers heavy casualties — and it’s at this point in the story when you begin to suspect Pierson’s fierce drive to accomplish the mission has its roots in a past failure that he’s desperate to see washed away, no matter how many body bags are filled in the process.

The predictable but sizzly scene ends with Pierson getting punched in the mouth, which is satisfying, but it leans heavily on tired stereotypes, like the good officer versus the bad NCO with a drinking problem and a lot of baggage. Manufacturing drama is one way to get a player interested in a storyline, and it probably takes less work than developing solid game mechanics.

That’s one of many points at which Call of Duty’s solo story feels less like a first person-shooter and more like a war movie. As Motherboard’s Matthew Gault pointed out on Nov. 10, the game’s reliance on cutscenes makes you feel like a member of an audience rather than an active participant. It’s a cool vibe, but not one that all FPS players will welcome.

You’re like Tom Hanks in “Saving Private Ryan,” except you don’t die at the end.Image via Activision

There’s a lot to love in the COD: WWII campaign: piloting a P-47 Thunderbolt and shooting down German planes; blasting apart Panzers with a Sherman; derailing an armored train. But it only lasts six or seven hours, max, leaving you feeling like you were just along for a (short) ride.

Even with an engaging story, entertaining characters, and some thrilling cutscenes, the single player mode just isn’t strong enough to make up for the multiplayer gameplay.

The Bad: Almost everything about multiplayer

While Call of Duty: WWII’s online play isn’t bad by the franchise’s standards, it doesn’t offer a whole lot that’s new. Sure, it’s got a few new features like Headquarters — an interactive, garrison-style social hub where players can refit between missions — and a new “class” system that lets you choose your division (and whether you want to be a POG).

Headquarters is, uh… different! But it doesn’t add a whole lot to the game. It’s a place to test out new weapons on the range, and wait before your match starts. You will also probably get lost as you make your way around to different Headquarters areas to pick up contracts, orders and supply drops, instead of just doing your profile supply tweaks on a menu screen. “Hooray, let’s make World War II gaming feel like a frantic half-day trip to run personal errands on the FOB before it’s time for patrol,” said no one, ever.

Can’t wait till this mission is over so I can get back to Headquarters, pick up my mail, check in with the CO, hit the rifle range, and get accosted by first sergeant for not having a clean shave… never mind, I’m joining the next game.Image via Activision

But when it comes to actual gameplay, it’s classic spray-and-pray Call of Duty. It’s entertaining enough, and can be fun, but by the 12th iteration, the tried and tested model has begun to feel a bit stale; a glossy new coat of 1944 paint is about as deep as it goes.

Sure, you can go into battle rocking an M1 Garand, but you’ll be disappointed. As many YouTube gamer channels have already noted, the maps are so small and congested, there’s really no reason to choose any weapon loadout beyond submachine guns. Most matches feature seven or eight players spraying bullets willy-nilly and racking up kills, while the remainder hide in corners desperately trying to get a kill with a semi-automatic rifle before being mowed down by .45 slugs from a grease gun.

Call of Duty reprises a lot of the same old standbys: plenty of weapon attachments; scorestreaks; perks, this time represented by ribbons so you can build out a rack of chest candy and equip new abilities; as well as the standard game modes. But CoD: WWII does offer something different with its new multiplayer scenario, War.

War is set up as a multipart operation with one side taking a series of objectives, while the other team goes on the defense. It’s an enjoyable enough departure from nonstop team deathmatches, or camper-heavy rounds of domination (though not with sniper rifles, because again, the maps are freaking tiny.)

But with just 12 players, and the fact that it only has three maps so far, “War” is less like a fresh new mode and more like three or four separate games of hardpoint or domination rolled into one. The fun wears thin after a while.

What are you doing? Get behind the bullet-proof wooden crate you idiot!Image via Activision

What really sticks with me in CoD: WWII is what it’s missing. It would’ve been great to get new mechanics like suppression, which makes your screen go hazy and your accuracy plummet when under heavy enemy fire. The ability to peek around corners and pop up from behind cover would have been nice, too.

These features, now par for the course in many first-person shooters like EAs Battlefield franchise or Ubisoft’s Rainbow Six: Siege, impact the way people play, making for a more challenging and engaging experience. Why sprint blindly around a corner when you can peek out, look for an ambush, and then move? It’s especially annoying because the campaign actually included some of those features.

Who knows? Maybe Call of Duty is shy to level up its game mechanics after letting players run along walls with their last few installments. At least there are no jetpacks in Call of Duty: WWII, so they get points for historical accuracy on that one.