"I’m not one to shy away from a challenge, but ... I’ve also never played Mario Kart before this week." 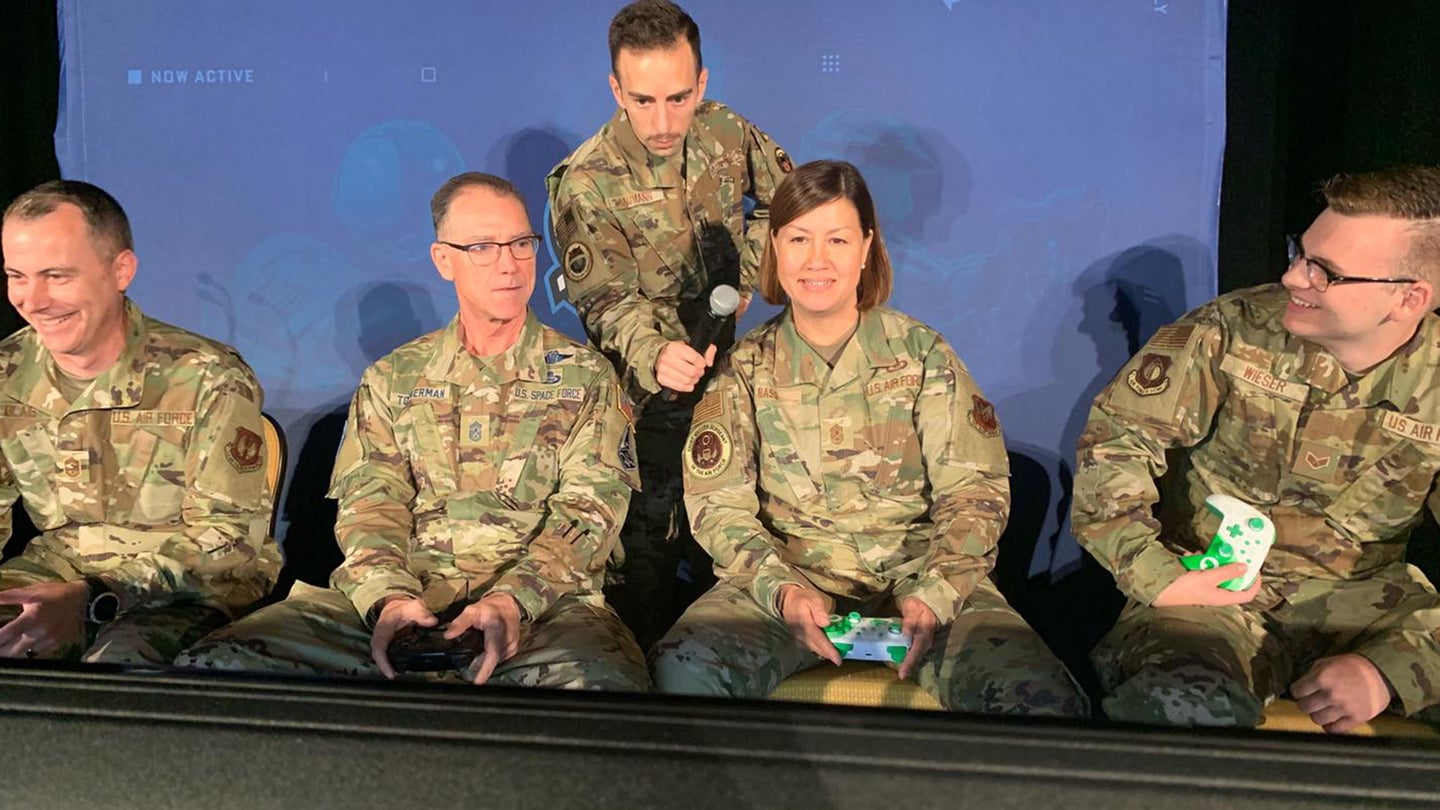 Chief Master Sgt. of the Air Force JoAnne Bass may be good at slaying trolls on Facebook and leading pro-women uniform changes in her branch, but one thing she’s not good at is playing Mario Kart, as airmen found out in a very public fashion on Monday.

To be fair, neither Bass nor Chief Master Sgt. of the Space Force Roger Towberman had much practice when they sat down with two other chiefs, one master sergeant and three junior enlisted airmen to play four rounds of the Nintendo racing game on day two of an Air Force Sergeants Association convention in Orlando, Florida. The chiefs were still learning how the game worked as the match was loading up, and neither of them scored a single point.

“I’m not one to shy away from a challenge, but … I’ve also never played Mario Kart before this week,” Bass later wrote in a Facebook post.

The four-round tournament was part of a presentation by Air Force Gaming, a service-wide organization that aims to connect farflung airmen through video games.

Just two years old, AFG already has 15,000 players and 144 teams at bases across the Air Force. AFG made headlines in December when the Space Force Call of Duty team, a component of AFG, trounced all the other American and British military branch teams in a tournament. There’s a rich pool of players in the Air Force, where over 80% of airmen between age 18 and 30 identify as gamers, according to AFG.

“Rank isn’t holding us back, you can be who you want to be,” said Capt. Zach Baumann, a senior AFG member, at the presentation on Monday.

“Programmers, security forces, medics, cooks, all career fields. When you see these gamers, don’t you just think, that’s what we want tomorrow’s leaders to look like as we talk about our digital future?” he added. “I’ve heard DoD is on this crazy mad hunt to find, retain, train and develop digital fluency throughout our ranks. Can someone let them know that we found a pretty good spot?”

Video games are not a waste of time when they get airmen together to form bonds, talk about shared problems, and come up with solutions, Baumann explained. The camaraderie is especially important when many airmen find themselves feeling isolated due to COVID-19 quarantine or just due to being stationed far from home.

For those who don’t know, Mario Kart is a classic racing game where players drive cartoon go-karts through fantasy race courses. Throughout the course, players throw pick-up items like heat-seeking turtle shells and slippery bananas at each other to gain the upper hand. The game also has a Battle Mode option, where instead of racing, players try to pop as many of the balloons tied to each other’s go-karts as possible before time runs out.

On Monday, the Chiefs, including Eishen, gathered as a Red Team against the junior enlisted Blue Team. The goal: pop as many as the other team’s balloons as possible in four rounds of one minute each. The chiefs were still being taught the game rules as the match loaded up, but they went in with a good attitude.

“I got $20 for someone to take my place … or unplug it,” said Towberman at the start of the match. He then upped the bid to $40 as Senior Airman Zurich Wieser explained the rules to him, but nobody took him up on it.

The camera then focused on Towberman and Bass, both of whom played as digital avatars designed to look like them, as they took the field. They put on a good show, lobbing bananas, turtle shells and ticking time bombs in an effort to pop their lower-ranked comrades’ balloons. But they were undone by lack of experience and, on Bass’ part, a dangerous habit of driving headlong into corners and not being able to pull out of them. It’s ok Chief Bass, my mom has the same problem when she plays Mario Kart.

“$60 for someone to take my place!” said Towberman, upping the bid after the first round, which went 5 to 1 in favor of the junior airmen. “And I’ll massage your shoulders!”

Bass asked if the older game Ms. Pac-Man was available, but it regrettably was not, Baumann said. The teams tied 4-4 in the second round after a valiant late-game surge from Eishen and Blais, but the next rounds went 5-2 and 3-2, both in favor of the junior Blue Team. Bass and Towberman remained scoreless at the end of the tournament.

“I felt like we held our own, but a bit more practice would have helped,” said Blais at the end.

“Did we start yet?” asked Towberman.

Bass offered “much respect” to the younger airmen, and she gave each of them a copy of her Velcro rank patch as a memento “because they were such good sports,” she said.

“I wanted so bad to do the #CMSAFstare,” Bass later wrote on Facebook, referring to a meme where the Mario Kart character Luigi gives a scornful “death stare” to unsuspecting players. “[B]ut my score was zero (I didn’t lose … I learned). Big thanks to Air Force Gaming for setting this up, and for finding new and innovative ways to connect our Airmen.”