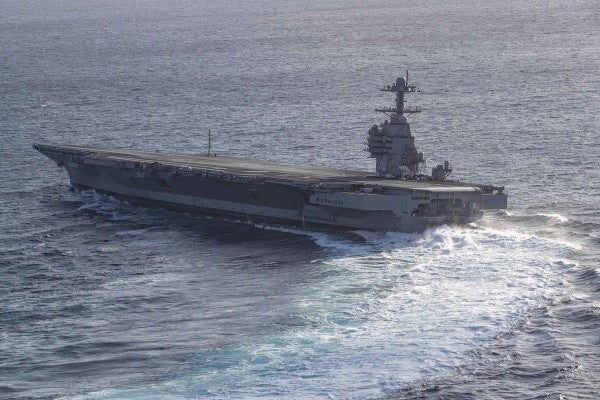 Navy officials enlisted the help of executives with the Florida-based Carnival Cruise Line, the largest cruise company in the world, to identify solutions for the ongoing maintenance issues that have stranded a majority of the service's aircraft carriers in non-deployable status, Business Insider reports.

Naval Sea Systems Command chief Vice Adm. Tom Moore “a few months back” met with several members of the Carnival Cruise Line team (including retired Vice Adm. William Burke, now the company's chief maritime officer) to discuss “how we have been able to do shipyard maintenance as quickly and effectively as we do,” a Carnival spokesman told Business Insider.

A spokesman for Navy Secretary Richard Spencer confirmed to Business Insider that the meeting took place, noting that the secretary “believes the Department of the Navy must make every effort to retain and expand our competitive edge.”

This wouldn't be the first time that Spencer cited Carnival in the context of pressing issues facing the Navy. During an interview with the Center for Strategic & International Studies in early December 2018, Spencer detailed the need for the service to conduct freedom of navigation operations in the Arctic in order to potentially assist stranded cruise ships.

“You know, [then-Defense Secretary James Mattis] was just telling me, what keeps you up at night,” Spencer said at the time. “One of the things is, can you imagine a Carnival line cruise ship having a problem, and the Russians do the search and – do the extraction?”

Two weeks after Spencer's comments, Carnival announced that the company had raked in roughly $18.9 billion in 2018, a record-breaking year for the largest cruise line in the world and its 105 hulls.

By contrast, seven of the Navy's 11 aircraft carriers are currently unable to deploy due to unexpected problems and ongoing maintenance.

Spencer, who previously staked his job on Ford's consistently-buggy weapons elevators, appeared to concede that it was Carnival would end up rescuing the Navy and not, as he joked last year at the CSIS event, the other way around.

“I have a demand for carriers right now that I can't fulfill,” Spencer reportedly said at a Heritage Foundation event this past Wednesday. “Did we sail the bottoms off these ships for the past ten years without doing the appropriate maintenance? The court is coming in saying that's pretty much the case.