Since the inception of the first purpose-built aircraft carrier nearly 100 years ago, few other types of naval warship have … Continued 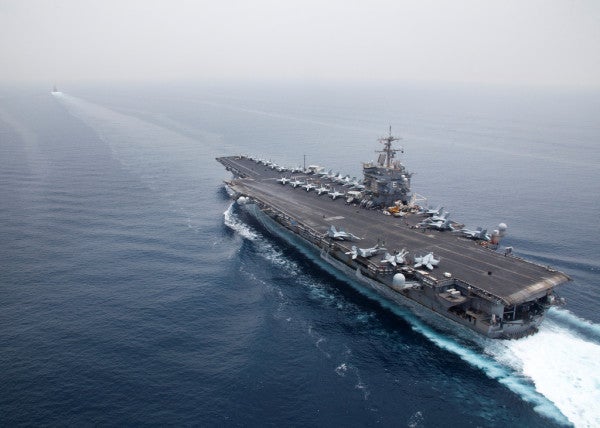 Since the inception of the first purpose-built aircraft carrier nearly 100 years ago, few other types of naval warship have been so polarizing. Aircraft carriers are often viewed in the United States as the impervious capital ships of the modern fleet and are capable of bringing terrible firepower to bear. Often hulking, these naval platforms typically require escorts and the support of their embarked air wing. During World War II, carriers saw extensive combat, delivering waves of aircraft to the Pacific theater. Their flexible nature as an airfield at sea lends to their role as the eyes of the fleet. This also makes them capable modern nuclear strike platforms.

What remains unclear is what role aircraft carriers will play in the future of the Navy and the larger geopolitical landscape. Warfare is changing and China is advancing in strides. The Chinese DF-21D ballistic missile represents one such advancement.

“China has expended vast time and resources determining how to kill US carriers, which suggests that the Chinese military takes carrier capabilities seriously,” Robert Farley, assistant professor at Patterson School of Diplomacy and International Commerce, wrote in a 2014 article for The National Interest. “The USN is very concerned about the DF-21D, which is one reason it’s working so hard on ship-borne anti-ballistic missile technology. The USN is also working on other countermeasures, including strikes on DF-21 launch sites at the onset of war (potentially delivered from nuclear cruise missile submarines), and electronic warfare.”

Could this hypersonic-capable missile sound the death knell of American aircraft carriers?

Every new technology threatens what came before, often resulting in radically shifted tactical paradigms. The advent of mass-deployed firearms largely negated horse cavalry charges, just as the implementation of torpedoes rendered heavy-gun battleships vulnerable. Observing the evolution of naval warfare at the turn of the century illustrates how modern carriers, like pre-World War I battleships before them, could appear obsolete.

“If fleets wanted to win decisively with gunfire, they had to fight inside torpedo range; and if they wanted to avoid risking the loss of capital ships to torpedoes, they had to fight outside effective gun range,” Kate Epstein, associate professor of history at Rutgers University, wrote in a 2013 article on U.S. battle tactics before World War I. “This competition for range between guns and torpedoes was at least as important as the better-known competition between guns and armor, and it threatened to upend battle tactics based on the primacy of the heavy gun and capital ship.”

This same military-technology shift works in reverse. Aircraft carriers and battleships are the capital ships of their times. The advent of the torpedo necessitated development of more maneuverable ships, armed with countering torpedoes of their own. For a sluggish and armor-laden battleship, avoidance proved impractical and gun ranges insufficient. This torpedo vulnerability grew costly in World War II and marked the end of the battleship.

Many opponents of aircraft carriers operate under similar assumptions that the DF-21D missile is the aircraft carrier’s bane, just as the torpedo proved for the battleship. It is easy to initially think that it will be nearly impossible to counter, destroy, or avoid this new weapon. Were it not for the defensive developments of our era, that might have proven true. It is a mistake to discount the passive and active countermeasure capabilities of an escorting Aegis-equipped strike group and screening carrier-borne flight wings. There are many important steps leading to a successful DF-21D launch, and disrupting any single one can slow or entirely avoid the attack.

Significant maritime surveillance assets would have to be devoted toward neutralizing an aircraft carrier, and ship-based, over-the-horizon radars are often imprecise. An adversary’s over-the-horizon radar could indeed detect a carrier strike group’s general location, but the missile (subsonic or otherwise) could be off target by miles without accurate and timely terminal guidance assistance. Patrol aircraft, supporting unmanned aerial vehicles, and submarines are the primary means of accomplishing this.

A portion of the U.S. advantage can be negated in the littorals, where the aircraft carrier is most vulnerable from the coast. An altered combat doctrine is likely, yet even this depends on the strength and numbers of coastal defense and missile batteries.

The most significant blue-water Chinese naval threat is represented by their submarine fleet.

“… given growing threats from China's submarines, as well as China's increasingly capable strike aircraft and anti-ship missiles, U.S. carriers may be held farther from the Chinese coast, particularly during the early stages of a conflict. This will reduce the number of U.S. naval aircraft in the fight, as these aircraft will have to traverse greater distances and will therefore spend less time on station,” a brief released last week by the RAND Corp. warned. “It will also increase the demand for U.S. Air Force tanker aircraft to refuel them. Increased tanker demand will, in turn, place further stress on available U.S. basing, which may itself be under threat from ballistic and cruise missile attack.”

The response against this is a key operational shift taking place within the U.S. armed forces. As outlined in the Joint Concept for Access and Maneuver in the Global Commons, a multi-service battle doctrine announced in January 2015, the military will and must operate across multiple domains in asymmetric ways. This is the culmination of the Air-Sea Battle and Joint Operational Access Concept doctrines and is the future of U.S. integrated battle doctrine. Asymmetric methods include defeating incoming missiles with a variety of electronic warfare systems, as well as disrupting adversary surveillance and reconnaissance attempts with cyber and electromagnetic attacks.

The future of warfare and the utilization of the aircraft carrier will hinge upon precisely coordinated and integrated air, ground, and naval forces at a level never before seen. Interservice cooperation and preparation will be vital. Common procedures, combined exercises and joint wargames are used in part to accomplish this. One such example is the joint forcible entry exercise that took place in early August of this year, combining the Army, Air Force, and special operations elements.

This will be supplemented in part through joint-tactical networking, which provides robust communication and data links to connect sensors, senior leadership, and boots on the ground. This enables all branches of the military to cooperatively utilize electromagnetic, kinetic, and cyber weapons systems. Examples of this are carrier-wing aircraft providing targeting data and terminal guidance to submarine-launched missiles.

The JLENS over-the-horizon sensor system is intended to be another part of this defense, with the capability of detecting supersonic and subsonic threats. While the large scale feasibility of utilizing JLENS in a national defense role remains questionable, it may yet prove useful in theater. In a 2012 exercise, a JLENS successfully guided an SM-6 surface-to-air missile to intercept an incoming anti-ship cruise missile. The SM-6 itself made news when in 2014, the USS John Paul Jones used it to intercept and destroy a supersonic high-altitude drone.

Fighters, bombers, submarines, surface ships, satellites, cyber operators, patrol aircraft, and ground personnel must act in tandem. Previously established doctrines are being adapted to operate across multiple domains in line with Joint Concept for Access and Maneuver in the Global Commons. A further example is fighter aircraft being used as surveillance platforms to support submarines attacking air defenses, or submarines operating drones and other unmanned craft to support special forces ashore.

If doctrinal changes are any indication, the aircraft carrier and future variations will be integrated platforms capable of regional deterrence, localized resupply, and long-range strike. No engagement will ever consist of a lone carrier against a swarm of carrier-killer missiles. They will operate as a staging ground for combined arms, supported by sea, land, and air assets.

Ultimately China’s arsenal will grow. It will hold the DF-21D as a deterrent and the United States will continue debating the aircraft carrier and refining future designs. An attack against the U.S. would present grave economic risk and invite future retaliations, leaving the prospect of war between them decidedly improbable.

But what would happen if a DF-21D succeeded in sinking an American carrier? Consider this parting thought:

2,896 American lives were lost at Pearl Harbor. 2,977 innocents perished in the Sept. 11 attacks. These two tragedies catapulted the United States into World War II, Iraq, and Afghanistan. How do you think America would respond to the loss of a crew of over 6,000 sailors and Marines?

CORRECTION: A previous version of this article incorrectly referred to the DF-21D missile as supersonic, not hypersonic. (9/30/2015; 4:04 pm)