According to preliminary findings from the 2015 Wounded Warrior Project survey, veterans receiving care for mental and physical health problems... 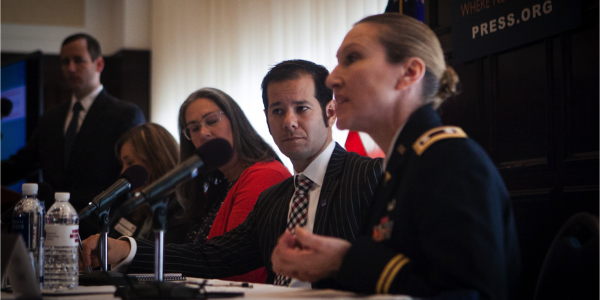 According to preliminary findings from the 2015 Wounded Warrior Project survey, veterans receiving care for mental and physical health problems continue to face disruptions to their day-to-day lives due to their injuries.

On Nov. 9, the Center for a New American Security hosted a panel discussion in Washington, D.C., on the findings of the sixth annual survey. The survey was conducted by the nonprofit to investigate the issues and challenges facing veterans in order to develop better policies and practices for treating injured veterans.

“We have to use this data to inform and shape our approaches, and to drive our strategy to serve the men and women who have served us in Iraq ,” said Phil Carter, the event’s moderator and senior fellow and program director with the Center for a New American Security.

The 150-question survey was completed by 23,200 participants, referred to as Wounded Warrior Project alumni. Veterans were asked questions about their military service and background, as well as their physical and mental well-being.

While it was unsurprising that wounded veterans suffer from various health problems, what was surprising was the current state of physical fitness and health of some of the alumni, said Dr. Meredith Kleykamp, an associate professor at the University of Maryland’s Department of Sociology. The survey found that nearly half, 46%, of alumni are obese and 38.8% are overweight.

“It’s really striking given that we know this is a population that entered service healthy,” remarked Kleykamp, adding that while the survey is a snapshot of what life is like for injured veterans now, it should be used to prepare for the future, especially with regards to lingering health problems, like traumatic brain injuries and deteriorating physical fitness.

“We’ve had more than a decade for some of these folks to be back and out of the military and living a new normal,” said Kleykamp. “I think it’s important now to start thinking about the consequences of aging. … If we don’t get on top of it now, it’s going to creep up on us.”

Respondents also cited emotional challenges as a cause for their withdrawal from physical activities and social functions, with two-thirds listing emotional problems as interfering with their social or family life.

However, the survey did indicate areas of improvement for wounded veterans. Participants answered anecdotal questions with roughly 80% agreeing that they had someone they could turn to for help and support.

However, 32% of those surveyed cited mental health issues as a barrier to employment, followed by concerns over social interaction, with one-third saying they had difficulty being around others.

“We’re seeing that these mental health symptoms were still very disruptive,” said Dr. Rajeev Ramchand, a senior behavioral social scientist with the RAND Corporation. “We’ve come a long way getting people into care. I think we need to be having a discussion, which we’ve been trying to have for a long time, of following what mental health care people are receiving, types of care they’re getting and staying in that care.”

Roughly 50% of participants live in the South, with 24% in the West and the remainder spread between America’s Midwest and Northeast. According to Jennifer Silva, the strategy and innovation executive vice president for the nonprofit, this has allowed Wounded Warrior Project to this information to focus its efforts where they’re most needed.