It excels in one area: Showing you what not to do in the event of a zombie attack. 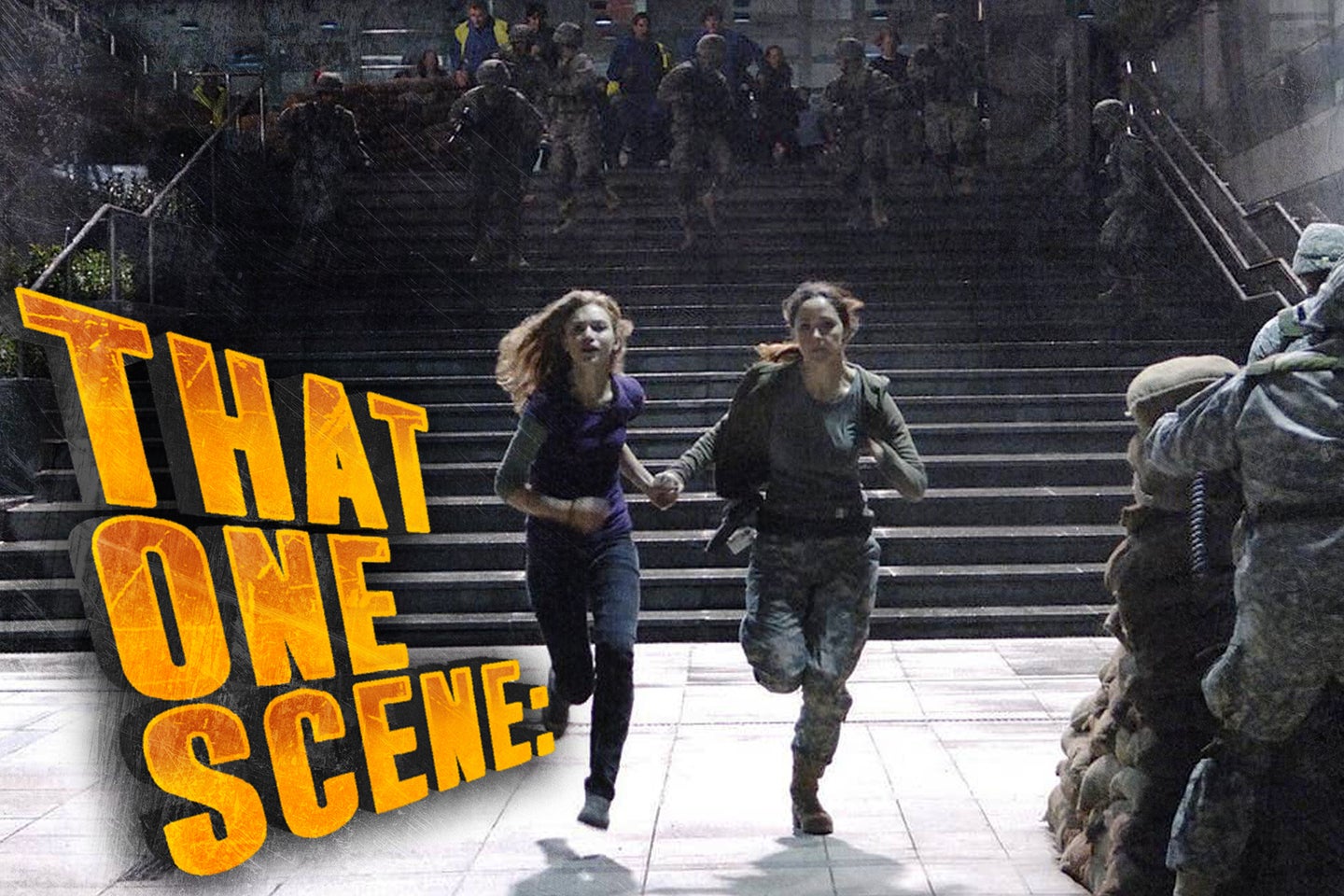 The zombie apocalypse is one of those topics that just about everyone in the military has discussed at least once.

Often introduced as a hypothetical about what you would do in the event that hordes of undead began marauding across the country, the answers range from trying to conceal one’s excitement, stocking up on ammunition, and hunkering down on base.

The fascination is understandable: The military is probably the one organization equipped to respond to an onslaught of walking cadavers who can only be stopped by a bullet to the head.

It’s with that in mind that we took a closer look at the 2007 film 28 Weeks Later, one of the few zombie flicks that actually pits the U.S. military against the walking dead onscreen — a confrontation that ends in disaster.

To figure out why we reached out to retired Marine Corps Chief Warrant Officer 5 Christian Wade. The former 2nd Marine Division gunner and distinguished “gun guru” walked us through the film’s numerous tactical faux pas, starting with the soldiers’ gear.

Though the film did a “respectable job” of getting the weapons used by U.S. forces “reasonably correct,” that attention to detail didn’t extend to tactics, Wade said: “It appeared that the director sent the tactical and weapons advisor home and didn’t have him back for the rest of the movie.”

Directed by Juan Carlos Fresnadillo, 28 Weeks Later takes place six months after the events of 28 Days Later, in which a virulent pathogen called the Rage Virus decimated the United Kingdom, transforming its citizens into bloodthirsty lunatics in a matter of seconds (not technically zombies, but also, very much zombies.)

At the sequel’s outset, those infected by the virus are believed to have died off, taking the virulent disease with them, and London, once ground zero for the virus, is ready for resettlement. A U.S. Army task force is deployed to assist with reconstruction efforts, and the stage is set for the military to get its ass utterly kicked by a horde of zombies.

When Don (Robert Carlyle), a civilian employee in the militarized safe zone discovers that his wife is alive — after leaving her for dead during a zombie attack earlier in the film — he uses his security clearance to enter a wing of the facility where she’s held.

Unbeknownst to Don, his wife is an asymptomatic carrier of the virus. All too predictably, he gets infected and immediately kicks off a second zombie apocalypse just months after the first one was put down.

Now, it’s hard to put too fine a point on why this is such a massive security failure.

Somehow, a U.S. Army Task Force led by a brigadier general, played by Idris Elba, “failed to consider that the worst thing that could happen in the ‘clean zone’ in otherwise devastated London would be an outbreak within their own secured area,” Wade said. “Then an infected person is brought into the secured area and left unsecured. Wouldn’t you know?”

Perhaps the most glaring mistake is just how easy it was for Don to waltz on in and visit with his infected wife.

“The janitor uses his all-access pass to walk right into the unsecured ‘secure space’ and gains access to the infected person,” Wade said, referring to Don, who for the sake of accuracy was technically a “section officer” in the safe zone — though that still doesn’t explain much.

Don somehow manages to enter “a completely unguarded critical biological hazard containment area which should have had more security than anywhere else in the world at that moment,” Wade added. “Not only was no one standing guard in the critical area, no one was even monitoring the area by way of a remote camera.”

As the virus begins spreading through the now not-so-safe zone, the base’s defenders — which includes a team of marksmen stationed on the rooftops — open fire.

“High angle shots can be difficult since, at close ranges (like those in the movie), less of the target profile is visible to the shooter, making shots even more challenging, especially when targets are moving,” Wade said.

Having the marksmen on rooftops in tight quarters, as opposed to an elevated position at a distance, significantly limits their ability to effectively engage their targets.

“At greater ranges (in the hundreds of meters), high angle firing (both up and down) can cause bullet impact shifts due to the angle,” Wade explained. “When firing at sharp angles up or down, shooters often must compensate for the effect of ‘bullet rise’ — a misnomer, a better term would be ‘bullet less fall’ —  by applying a formula (Actual range x Cosine of firing angle = Applied hold/aiming or scope turret solution).”

In other words, “in tight urban shooting conditions, firing at down angles (or up angles) can make a tough job even tougher,” Wade said.

As the defenders on the ground are overwhelmed, they’re ordered to open to open fire on civilians and zombies alike.

“As the zombies overrun the area, naturally, the decision is made to just kill everyone,” Wade said. “For some reason, Jeremy [Renner] believes it appropriate to abandon his assigned weapon (do not do this in real life) in favor of an M4 carbine with EOTech sight and no spare 5.56mm ammunition.”

On top of that, the base’s defenders deem it a good idea to attach their night vision optics directly to the rail system on their rifles, as opposed to mounting the optics on their helmets and using a night aiming device such as a PEQ-16, which is what deployed troops actually do during real-life night ops.

“That really makes looking around very interesting for the remainder of the movie,” Wade said. “But the technical advisor apparently went home by this point in the movie production.”

The zombie attack ends with the firebombing of London, because apparently, their rules of engagement poll vault from “shoot zombies” to “shoot everyone” to “lol, let’s just burn this bitch down.”

It’s also a bit surprising that the U.S. military Task Force had no air assets beyond a single Aérospatiale Gazelle — a French helicopter — nor did they assign any armor to the safe zone, which seems odd since by this time everyone on the planet knew that the infection was spread by close contact.

Then again, if a bunch of Bradleys with Bushmaster chain guns instantly shredded all the zombies it’d make for a very short film, and as Wade points out: “‘Hey, we need the plot to move along, right?”