‘Enlisted Military’ Named Most Stressful Job In The World

If you’ve served in the military you understand stress intimately. The amount of shit you put up with in the... 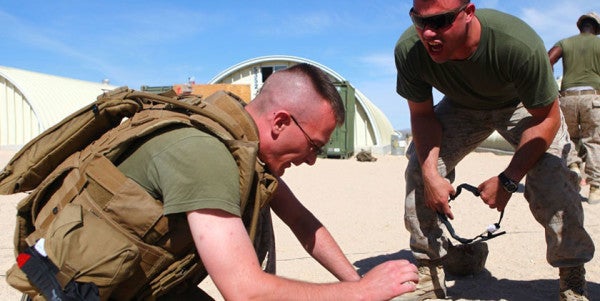 If you’ve served in the military you understand stress intimately. The amount of shit you put up with in the service varies, or takes different forms depending on what your job is, who you work for, or what branch you’re in. But, the key thing is that military service comes with stress, especially for those of us who enlist.

Which makes the findings of a new report by CareerCast less than shocking.

After analyzing 11 factors relating to stress in jobs, including deadlines, hazards, physical demands, competition, career growth potential, and public scrutiny, the study concluded that “enlisted military” ranks as the world’s most stressful job field for 2017.

Related: ‘Enlisted Military’ Ranks As One Of The Worst Jobs In The World »

It’s not surprising when you consider the stress factors listed. Deadlines in the military? How about right fucking now, private. Not 10 minutes from now. Now! Or hazards? Think deployments, training, or really any time a boot lieutenant wants to test out his land navigation skills. Then there’s physical demands, aka being in shape and training all the time; competition, which, in the military, means fighting for a promotion against everyone in your job field; career growth potential, ha! Thanks sequestration, troop draw downs, budget cuts, and peacetime military.

When you’re at the bottom, shit rolls downhill and tends to stay there until some poor private first class has to come along and sweep it all up.

The study also factored in median salary as a contributor to stress. Spoiler alert, we don’t make shit on the enlisted side, with the median coming out to $27,936 a year. Out of other high stress jobs the only ones who get paid less are taxi cab drivers — they’re ninth on the list — with a median income of $23,510 a year.

In the study, CareerCast carefully broke down the stress factors facing distinctly different careers. Firefighters and police officers, ranked second and fourth respectively, face increased stress from putting their lives at risk in order to protect others (enlisted military falls under this as well.) For reporters and broadcasters, ranked sixth and tenth, stress is due to tight deadlines and fear of lawsuits or layoffs.

Interestingly enough though, the study lumped all enlisted jobs together. Grunts alongside POGs. Air traffic controllers next to infantrymen, administrative personnel, truck drivers, tankers, and camera guys, which is a bit misleading.

It’s not like the military is just composed of enlisted and officers and that’s your job. Certain responsibilities fall onto each side of that aisle, but there are military police officers, firemen, broadcasters, journalists, and drivers, all with different levels and types of stress they deal with each day.

This isn’t to say that one job or another has the market cornered on stress, but the daily stressors, and the level of stress that one enlisted service member faces at a desk job, for example, is likely much different from what a grunt walking point on a patrol faces.

So while it’s probably true that compared to other jobs, being enlisted in the military is infinitely more stressful than say, being a diagnostic medical sonographer, compliance officer, or hair stylist — the three least stressful jobs — like all things in the military, some guys have it worse.

Though based on this report, an enlisted barber would fall somewhere in the middle in terms of stress, so that’s not a bad gig to have. As for the rest of us, we can at least take a perverse kind of pride in the fact that we all deal with more bullshit and stress than civilians (and officers) so there’s that.