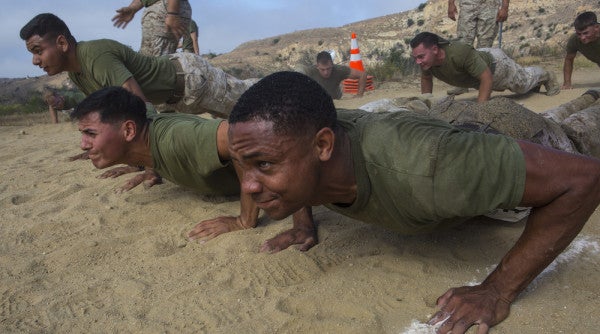 Online job databaseCareerCast released its annual job rankings list on Thursday, and to nobody’s surprise, “enlisted military” came in 197th out of 200 occupations, making it the fourth-worst job in the United States. The surprising thing, however, is that the profession is slipping: Last year, it was only the fifth worst.

After weighing a number of factors ranging from environment, salary, and growth outlook to several stress factors, CareerCast rated only logging, broadcast journalism, and newspaper reporting as worse than enlistment (although, ironically, logging has a better growth outlook than the latter two careers).

“Examples of this year’s worst jobs are professions that make the world a safer place,” the report reads. “Firefighters and enlisted military personnel face high stress and dangerous work conditions, without particularly high pay to compensate them.”

This isn’t totally surprising: a separate CareerCast analysis released in January found that enlistment ranked as the most stressful career headed into 2017 thanks to the physical demands and hazards faced on the job, like huffing it for miles weighed down by gear or, you know, dodging gunfire.

But as a veteran’s news and culture site, we have to take issue with the characterization of enlisting is the “worst” career path in the country. As with last year, many of the criteria CareerCast employs don’t account for career opportunities in a way that accurately measures success and advancement within the military. The growth standards that apply to other industries are not necessarily applicable to the armed forces.

But more importantly, the ranking doesn’t reflect the fact that joining the military isn’t just a job, but a higher calling. When you sign your name on the dotted line, you aren’t just signing a contract with someone for a wage and benefits: you’re agreeing to serve your country, and work yourself to the bone in the process.

Sure, the job may be tough as hell and pay like garbage, but there's more to it than that. As my colleague James Clark wrote in January: “We can at least take a perverse kind of pride in the fact that we all deal with more bullshit and stress than civilians (and officers) so there’s that.”

That said, it could be worse: You could have my job.