5 Questions To Ask A Military Recruiter Before You Enlist

If you’re thinking about enlisting in the military, you’ve already answered the most important question: Am I willing to put... 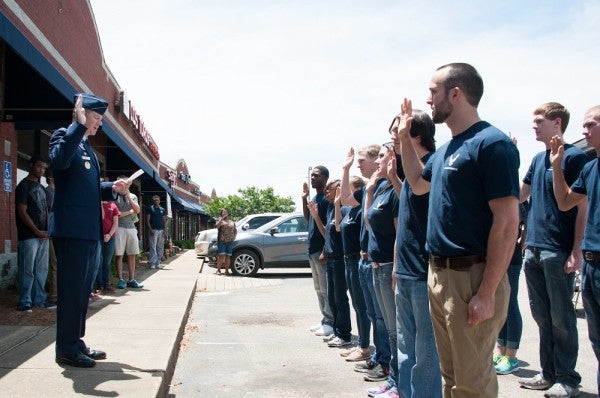 If you’re thinking about enlisting in the military, you’ve already answered the most important question: Am I willing to put the security of my country and the safety of my future brothers and sisters in arms before my own interests and well being? Only you can decide that.

Once you’ve made up your mind on military service and all that it entails, it’s time to drop by the recruiter’s office. There’s nothing wrong with asking standard questions like “Which service has the best uniform?” or “Which branch’s basic training is the toughest?” The answer to both of which is: the Marine Corps. At least that’s what my recruiter told me when I enlisted in the Marines. He also forgot to tell me the dress uniforms only look good with shirt stays, which is pretty much a men’s garter belt.

But you shouldn’t let the conversation stop there. When you’re talking to your recruiter and getting yourself psyched up for boot camp or basic training, it can be easy to lose sight of the fact that you’re signing on for four or more years of service, and not just what’s immediately in front of you.

The United States’ all-volunteer force really is a profession of arms, with an added emphasis on profession. Whether you’re in for one enlistment or several, you should approach it like a professional would: Be inquisitive, thorough, and assertive from beginning to end.

Ask the questions a professional would ask.

1. What jobs are actually available to me? No, really.

There’s a difference between the job you may want and the position your recruiter may try to pitch you. Recruiters have a mission after all — to bring eligible men and women into the armed services — and the military’s needs come first. But you have your own professional, financial, and personal interests to look out for. Whatever bargaining power you have while in the delayed-entry program disappears the moment you take the oath and get on that bus.

So make sure you’ve signed up for something you want to spend the next four or more years doing.

2. Can you put me in touch with a service member in the field I’m interested in?

Though I never asked my recruiter to put me in touch with anyone in my job field — public affairs, which is an odd way of saying military journalist — I did talk to Marines I met through work, school, and family who served in that occupational specialty. While it didn’t lead to any shocking revelations, the Marines I spoke with clarified a few things about my prospective job that my recruiter couldn’t tell me because he held a different military occupational specialty.

If your recruiter is going to sell you on the wonders of a specific field, you’re going to be best served if you hear it from someone who’s done that job. If your recruiter is an admin clerk and you’re interested in being a mechanic, or a chemical, biological, radiological, and nuclear specialist, and want to know what the day-to-day life is like while you’re in garrison or deployed, you should check with someone in that field.

3.What is the retention rate for my prospective job and service?

Yes, I know that if you ask your recruiter this question you run the risk of being brutally knife handed as you’re told to get “outta my daggum office.” However, with the military facing budget cuts and reductions in force size, it’s important to consider.

Inquiring about or investigating the retention rate of the branch you want to enlist in could provide you with some insight into the current state of that service. For example, if 42% of sailors said that morale was poor or marginal and 62% said their work-life balance was not ideal — which was reported in a 2014 Navy Retention Survey — it might be good to know.

In the end, if you want to serve then this shouldn’t dissuade you, but it may give you a better idea of what you’re getting into.

4. Why do some jobs have longer enlistment requirements and is this standard for everyone in that field?

A good friend of mine got suckered into a five-year enlistment for the same job I had, and two other friends in a related field had the same thing happen. The reason being, they never asked the follow-up question: “What is a standard enlistment for this field?” or, “Are you just fucking with me?” While some jobs require a longer enlistment obligation due to intensive or extended periods of training, not all do.

Nothing against your recruiter, but if he or she says you should enlist for five years instead of four, you should be asking why.

5. Yes, you already told me that all the branches pay the same, but does it really work like that?

While military pay is standardized, different fields promote at different rates, as do different branches, which means your branch and your job field impact your income, albeit indirectly. Though promotion rates are unlikely to change your mind, if you’re looking at a particular career, those who aren’t set on one might find it useful to know if selecting one job over another will net them more or less money over their enlistment.

Additionally, you might find yourself eligible for certain stipends — such as additional pay for speaking multiple languages fluently — depending on your field. While there aren’t an abundance of special-pay opportunities for junior-enlisted service members, there are some.