The U.S. Army pulled a recruitment commercial from TV broadcasts this week after revelations that one of the featured soldiers... 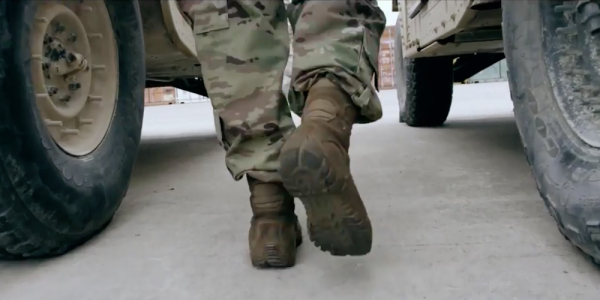 The U.S. Army pulled a recruitment commercial from TV broadcasts this week after revelations that one of the featured soldiers has since been convicted of raping a 15-year-old girl, according to documents obtained by Business Insider.

The commercial, titled “Honor,” was one in a series of 15-second spots that aired across the country in the last several weeks. The video in question aired 245 times nationwide between May 8 and May 15th, when Army officials formally pulled the spot.

While the ad has disappeared from official Army social media accounts, Task & Purpose tracked down an archived copy, which you can watch below:

The soldier in question, former Spc. Nicholas Marcum, was convicted in a general court martial and sentenced to 20 years in Fort Leavenworth for “forcible rape of a child” in September 2016, the Alaska Dispatch reported:

Marcum will be confined at the U.S. Disciplinary Barracks in Fort Leavenworth, Kansas, said Army Alaska spokesman John Pennell. The barracks is the military's only maximum-security correctional facility.

Marcum also had his military grade reduced to E-1 and was ordered to forfeit all his pay and allowances. Pennell said Marcum would be dishonorably discharged at the end of his sentence.

Marcum joined the Army in 2012, completing basic training at Fort Jackson before receiving additional training at the Army School of Music in Virginia, according to the Dispatch. Marcum reported for duty with the 9th Army Band at Fort Wainwright in Fairbanks, Alaska, later that year.

The rape occurred in Alaska, during a visit by Marcum to the victim’s family’s home in 2012.

Army officials appeared horrified by the oversight, insisting that Marcum’s image never be used again in branch materials, according to Business Insider.

“All soldiers, civilians, and family members are vetted prior to filming in any national or local advertising effort,” Army Maj. Avon Cornelius wrote of the incident in the documents obtained by Business Insider. “However, participants are not usually vetted a second time if images are later used.”

Cornelius added: “We have put in place measures to ensure secondary vetting of images in all future productions to minimize any similar circumstance occurring again.”