5 Of The Dirtiest Jobs The Military Has To Offer

The military is full of awful work details and daily responsibilities, but whether you’re spending an absurd amount of time... 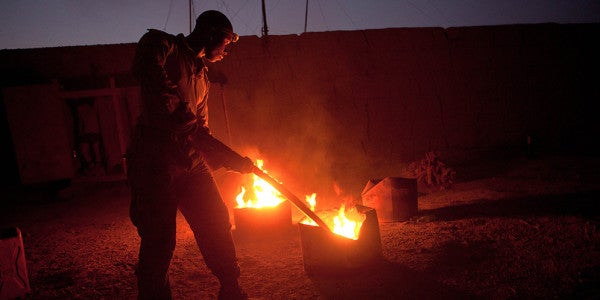 The military is full of awful work details and daily responsibilities, but whether you’re spending an absurd amount of time picking up trash, mopping, cleaning weapons, you eventually get a break, and thankfully, it’s rarely your nine-to-five.

But, there are some jobs that just suck 24/7, and worse, some poor saps are stuck doing them. Here’s a tribute to those men and women who do the dirty jobs that keep the military functioning. The work might not be glamorous –- and chances are no stolen valor d-bags are going to claim they spent a deployment washing dirty undies or stirring shit — but they have to get done, and those who do them are essential to the military’s mission.

While not a career field, thank baby Jesus, this is part of daily life for forward-deployed units, and the further out you are, the crappier it is. Pun intended. For those of you who don’t know what this entails, it’s pretty straightforward. Without running water, units often construct wooden porta johns, if you’re lucky, and place large buckets, usually half of a steel drum, underneath the wooden seat. Once it’s full, it often falls to some poor soul to drag it out, fill it with gasoline, light it, and stir.

I’ve heard that most units rotate this duty so nobody gets stuck doing it the whole deployment, but I swear I only ever saw the same Marine on burn shitter detail while deployed.

While I was lucky enough not to get stuck stirring buckets full of human waste, I did make plenty of trips to burn pits with my WAG bag in hand, and there is nothing like the smell of rotting, semi-charred crap, in a steadily growing pile, baking in the hot Afghanistan heat.

Again, there was always that one guy stirring away. He had to climb around the edge of the burn pit with a rake and drag WAG bags back into the center, to make sure they would eventually burn. Oh, and he had to chase off the base dogs who would try to eat the bags.

Here’s a video of a soldier, nicknamed “Sandwiches,” talking about his day job burning shit.

This is easily one of the most thankless, but necessary, daily duties while deployed. If you’re lucky, or if you’re a POG like me, post tends to be an occasional responsibility; however, for those in an infantry unit, it’s a daily ritual, with patrol as the only escape.

I know what you might be thinking, post isn’t a dirty job, but let me paint you a word picture, and I’ll let you decide: Imagine a mountain made entirely of water bottles full of piss or dip spit, food wrappers stuffed into empty ammo cans, and depending on where you are, there’s that one bucket in the corner overflowing with WAG bags. Depending on what the situation is, you may be up there for a while too. Sounds pretty gross right? Thought so.

Enlisted medic or Navy Corpsman at a base clinic.

The way I’ve heard it talked about, this seems to involve numerous sessions of staring at strangers’ junk and determining whether or not they have some kind of sexually transmitted disease, identifying a host of never before seen rashes, treating festering wounds on feet that smell like moldy meat, and listening to people describe their most recent bowel movements in excruciating detail.

Fortunately, I was able to keep out the battalion aid station, and my only dealing with it came when I needed to sprint to the nearest “doc” to beg for one of those little pills that worked like a “stopper” after eating some bad meat from a local vendor — or, after an ill conceived attempt to “cook” a chicken we found.

I imagine that by the end of their enlistment, most docs or medics feel a lot like this.

You would think that this would be the “cleanest” job of all, but you’d be wrong. Can you think of anything more disgusting than spending your day sorting through soiled silkies, sweat-stained socks, and shirts and uniforms so caked with salt they can stand on their own?

It’s an unrewarding job, but one that many are grateful for once they can shed their sweaty, disgusting cammies. The small gift of clean clothes can mean a world of difference, and it keeps the average enlisted man or woman from getting chewed out by some angry staff noncommissioned officer who seems to have forgotten that they’re on deployment, and service members have more important shit to worry about than having a clean uniform.

For those of you who want to help out your buddies down range, then consider an exciting career as an Army National Guard laundry repair technician, and just check out this amazing video with ridiculous 1980s “metal” music.

I don’t know about you, but my dental hygiene was pretty poor when I was on active duty. Yes, we had free medical and dental, but who actually gets a chance to take advantage of that? The only time I ever made it to dental was to get cleared for deployment, which means that for the four years I was in, I only ever went twice. I’m also willing to bet that there are some guys who never brushed their teeth, let alone knew how to operate a toothbrush; you know, those guys you can smell when they start talking.

I can only imagine what that was like for the poor dentist who had to lean over that gaping cesspit of a mouth to check for cavities. I was always a little worried that one of them might just snap one day when I was in the chair and get revenge on me for not flossing. Novacaine? Nah, where’s the fun in that?