On An Island Halfway Around The World, Locals Enlist To Fight And Die For The United States

Several years ago, Nathan Fitch, a Peace Corps volunteer, was strolling along one of the beaches of Kosrae, a tiny... 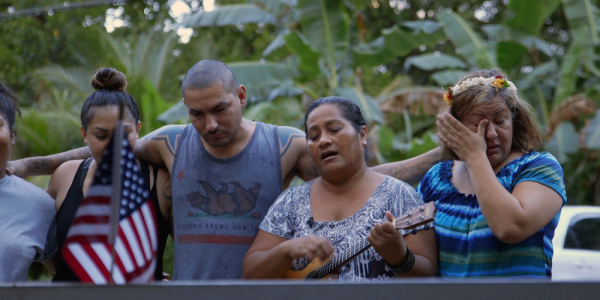 Several years ago, Nathan Fitch, a Peace Corps volunteer, was strolling along one of the beaches of Kosrae, a tiny island state encircled by the turquoise waters of the Pacific, when he met a man who introduced himself as a U.S. Army soldier. Fitch was shocked. The man wasn’t American. He was a local. And he had just returned from a tour of duty in the Middle East.

“That juxtaposition was striking,” Fitch, who is now a filmmaker and journalist living in New York, told Task & Purpose. “This person who was in paradise had come from Iraq the day before.”

Kosrae is one of four states that make up the Federated States of Micronesia, or the FSM, a tropic nation of more than 600 islands in the Western Pacific. It is one of the most remote regions on Earth, a popular destination among adventurers drawn by its pristine coral reefs and lush, untouched landscapes. But that’s not all that brings foreigners here. It is also the people — specifically, the young men and women who struggle to make a living in a place caught between the present and the past.

An aerial view in Micronesia, a region comprised of thousands of small islands in the western Pacific.Photo by Nathan Fitch

The FSM is an independent country, but a far-reaching bilateral agreement with the United States gives Micronesians the ability to enlist in the U.S. armed forces. A remarkable number of them do — at nearly twice the rate per capita of American citizens. The inhabitants of two neighboring Pacific nations, the Marshall Islands and Palau, are also able to sign up. An Army recruiting station on nearby Guam — an unincorporated U.S. territory home to Joint Region Marianas military command and thousands of U.S. military personnel — serves all three countries.

How the far-flung region came to be a wellspring for U.S. military recruiters is the subject of Island Soldier, Fitch’s first feature-length documentary. The film takes a hard look at the reasons why islanders are signing up to fight — and in some cases die — for a country that isn’t theirs. It also explores the impact their service has on their homeland and the people they leave behind, raising serious ethical questions about offering the uniform to a population from a distant and remote land.

Island Soldier follows the stories of three soldiers from Kosrae, a 42-square-mile speck of land home to about 6,500 people. Sgt. Kilfrank Sigrah, a former elementary school teacher, is assigned to a unit at Fort Carson, Colorado, and deploys to Kandahar Province, Afghanistan. Arthur Nena enlists, graduates boot camp, and finds himself stationed at Fort Hood in Texas. And then there’s Sapuro Nena, whose story is told posthumously — because he was killed in action.

Economics has a lot do with why so many islanders enlist. When Fitch started filming back in 2012, an enlisted infantryman made about $18,000 a year, roughly the same as Kosrae’s governor. For young Micronesians, a chance at that kind of money has serious pull. “You can be a high-school graduate and be suddenly vaulted into this realm where you’re on the same level as the highest paid government official on your island,” Fitch said.

Kilfrank Sigrah, a former elementary school teacher in Micronesia, stands at attention at a forward operating base in Kandahar, Afghanistan.Photo by Nathan Fitch

Deep-seated affection for the United States is another big factor. Many people on the islands still view America as the country that swooped in and liberated them from the Japanese during World War II. In fact, every year villages commemorate the liberation by holding raucous festivals. Fitch said that while filming on Kosrae he was often struck by a “palpable sense of patriotism” — not for Micronesia, but the United States.

The soldiers’ families are a centerpiece of Fitch’s documentary. It is through their lives that some of the thorniest issues behind allowing islanders to serve are exposed, like the aging father forced to shoulder the extra labor left behind by the youth who’ve enlisted, or the Gold Star mother struggling to make sense of her son’s remote death. While many Micronesians have left the islands at some point, Iraq and Afghanistan might as well be different planets.

The remoteness of the islands has practical consequences as well. With thousands of miles of ocean between them and the closest Veterans Affairs hospitals on Guam and Hawaii, island vets and their families face steep hurdles when trying to accessing the health services available to their American counterparts. Because local hospitals often lack even the most basic supplies, vets are left to raise their own funds to buy plane tickets that start at more than $2,000.

A soldier holds a folded American flag during the funeral of Sgt. Sapuro Nena in Kosrae, Micronesia.Lauren Katzenberg

“There are some benefits that are extended, but there’s a lot that aren’t,” Fitch told Task & Purpose. “If the U.S. is going to go out and recruit people from another country, from remote islands, to go fight our wars, I think we have a responsibility to help them re-acclimate.”

For the mother of Sapuro Nena, the Kosraean soldier who died in Afghanistan, the situation is more stark. “We don’t vote but we can get killed,” she says in the film. “We can serve and get killed.”

Island Soldier is currently playing at film festivals across the country and internationally, and will be distributed by Pacific Islanders in Communications for a public television broadcast.

Watch the trailer for Island Soldier below.