The Marine Corps Is Offering Enlistment Bonuses For Grunts… Again

The Marines are looking for a few good recruits to bolster the ranks, and the Corps is willing to pay... 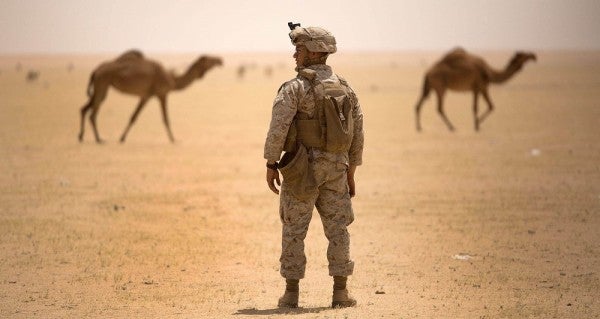 The Marines are looking for a few good recruits to bolster the ranks, and the Corps is willing to pay a little something extra for those looking to go infantry. Emphasis on little.

According to a Sept. 12 MARADMIN for fiscal year 2018, the service is willing to shell out $5,000 for would-be Marines who enlist to be grunts… with a six-year contract, rather than the usual four. The bonus amounts to roughly $833 extra each year and applies to the following infantry military occupational specialties: Marine rifleman (0311), machine gunner (0331), mortarman (0341), assaultman (0351), anti-tank guided missileman (0352), and light armored vehicle (LAV) crewman (0313).

The bonuses for the 2018 fiscal year mirror those in 2017 and 2016 for infantry Marines — five large, but with the caveat that you’ll have to wait an extra two years to get your hands on that DD214 and GI Bill money.

$5,000 may seem like a lot, but when it comes with an extra two years latched onto the contract… eh, not so much.

Active-duty Marine life isn’t all bad, but it doesn’t take long for even the most motivated and gung-ho devil dog to start yearning for their EAS. Doubly so when you think about the crap grunts have to put up with. Two extra years of ass-chewings, standing by to stand by, and waiting for hours to turn in rifles at the armory seems like it's worth a lot more than the extra $70 bucks you’ll have in your bank account each month.

And, let’s be honest, most boot Marines will blow that lump-sum bonus their first weekend out on the town at J-Vegas.

H/t to Paul Szoldra for reminding us all that the green weenie is still out to get us.