Marines Offering Grunts Up To $70,000 To Become Squad Leaders And Re-Enlist

The Marine Corps has been saying for years that it needs more tech-savvy geeks to fight in cyberspace. Now, it... 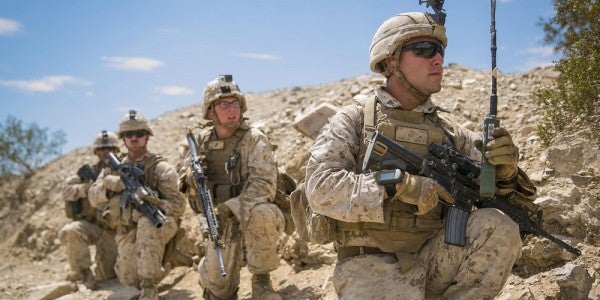 The Marine Corps has been saying for years that it needs more tech-savvy geeks to fight in cyberspace. Now, it appears the Corps is returning to its trigger-pulling roots with a focused effort to retain grunts who are willing to assume more responsibility.

Marines can receive up to $70,000 as part of three new Infantry Squad Leader initiatives, which were announced on Monday as part of its fiscal 2019 Selective Retention Bonus program, Corps officials told Task & Purpose.

About 5,400 Marines are eligible for the three initiatives, through which the Corps hopes to fill 300 squad leader billets.

The Corps is looking specifically for corporals and sergeants with between five and seven years of service. They must also have either already gone through or be willing to commit to completing the Infantry Small Unit Leader Course, said Yvonne Carlock, a spokeswoman for Manpower & Reserve Affairs.

Eligible first-term 0311 riflemen, 0331 machine gunners, 0341 mortarmen, 0351 infantry assault Marines, and 0352 anti-tank missile gunners can receive $30,000 to re-enlist for up to 48 months and make a lateral move into 0365 squad leader, according to Carlock. Those who make the cut will spend at least 36 months in the operational force.

The Marines are offering more money for longer contracts. Marines who re-enlist for six years can receive another $40,000 on top of the initial bonus, both of which are taxable unless the Marines are deployed to a combat zone where the tax exclusion applies.

The Corps is also offering two incentives to first-term corporals and sergeants who are currently assigned to infantry battalions as 0311 riflemen, Carlock said. They can receive $20,000 to re-enlist for four years, become squad leaders, and remain in their units for two years.Or they can receive $10,000 to extend their contracts by two years, during which they would serve as squad leaders in their units.

Marines who meet the criteria for the three incentives can submit their re-enlistment packages as early as July 5, Corps officials said.