Legendary Sgt. Maj. Brad Kasal Praises His Marines As ‘What Is Right About This Nation’ In Humble Retirement Speech

It's not a stretch to say that Sgt. Maj. Brad Kasal is a legend in the Marine Corps. Most Marines... 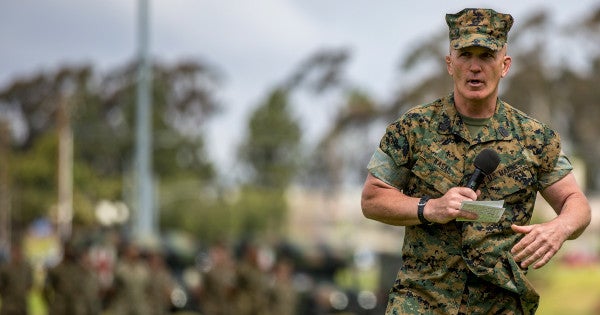 It's not a stretch to say that Sgt. Maj. Brad Kasal is a legend in the Marine Corps.

Most Marines know him as an incredible leader who epitomized Corps values and always led from the front, while most of America learned who he was after he was photographed walking out of an insurgent-infested house in Fallujah, Iraq on Nov. 13, 2004. Being helped by two of his Marines, Kasal was still clutching his 9mm pistol with finger straight and off the trigger, reeling from blood loss after being shot seven times and taking 43 pieces of shrapnel from a grenade.

Kasal survived his wounds. But the photo showed Marines at the time what a true combat leader was: Then a first sergeant, Kasal didn't need to be in that house. Junior Marines are usually the ones kicking in the doors. But after he heard some of his Marines were pinned down inside, he joined a squad to make entry and went in anyway, where he took out an insurgent before being shot in the legs and rolling on top of a fellow Marine to shield him from a grenade blast.

He is the definition of a hero.

But you wouldn't know it from the speech he gave last week, shown in the video above, when he retired from the Corps after 34 years of service.

Standing in front of an assembled formation of Marines from 1st Marine Expeditionary Force, where he had been serving as the top enlisted leader, he spoke for 18 minutes and barely mentioned his service or himself once, except to briefly thank friends in attendance who had served in units he had served with in the past.

Instead, he humbly told the crowd about the accomplishments and service of the Marines behind him.

Kasal recalled the words of President Teddy Roosevelt, who famously said to “speak softly and carry a big stick,” and then related it to his Marines:

Diplomacy will only work if you have the strength to back it up. Ladies and gentlemen, behind me, to the right, to the left, is the big stick. The ones who do the work, who put in the sacrifice, every day, to make sure that this country, this most beautiful great nation still stands.

But he wasn't finished. He explained that after the speeches were over, there would be a pass in review, where the Marines would turn and march in line, passing in front of the 1 MEF Commanding General, Lt. Gen. L.A. Craparotta, and Kasal, to render him their final salutes before he departs. So he asked that they get out their cameras.

“Take your pictures, and then later when you turn on the evening news and you see , or if you're just having a bad day, pull those pictures up,” Kasal said. “It will remind you of what is right and great about this nation. And our nation will always have a future as long as we have great Americans like you see out here.”