John McCain, the legendary Navy aviator and long-time Republican senator from Arizona, passed away on Saturday at age 81. John... 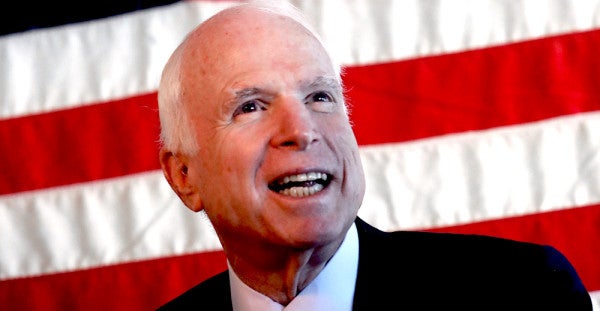 In 1978, shortly after I was elected to the Senate, I was asked to travel to China with Senators Sam Nunn, John Glenn, and Gary Hart to meet with China’s Leader, Deng Xiaoping. Then Captain John McCain was the Navy’s Senate Liaison Officer, and he escorted us on the trip.

John’s bravery and honor were well known, but what impressed me most was his indefatigable energy, good humor and passion to serve our country. He was just damn fun to be with.

While on the Committee, I would turn to him frequently for guidance because I knew he would give me his “straight talk.” When John decided to run for elective office, he sought my counsel, and I shared with him what I thought would be the quickest path to a seat in the Senate. One of the highlights of our friendship was his request for me to serve as best man when he married beautiful Cindy. At the wedding, I had the chance to meet his parents, Admiral John McCain, Jr. and Roberta, and I saw immediately where he got his toughness —and charm.

We traveled together frequently as Senate colleagues, and when fate placed me at the Pentagon, I turned to John for help with tough battles on The Hill.

William Tecumseh Sherman in a letter to General Grant wrote, “I knew that wherever I was that you thought of me, and if I was in a tight place you would come if alive.” I knew that John McCain would always come for me if alive.

I want to tell a story about John McCain — a story that took place at the Polish embassy, back when Poland was still a committed democracy of the sort that would host a book party for the release of Anne Applebaum's book, Gulag (which you should read).

Anne will correct me if I am misremembering the details here–as it's been a few years. But McCain, as I recall, introduced Anne to the assembled audience, which included a large number of Gulag survivors.

His short speech moved me as much as any other speech–on any subject–I have ever seen a politician give. For starters, he had clearly read the book (you should too)–which is a bit of a project. “Gulag” is long. It is exhaustive. And it is brutal and unsparing.

While McCain had many thoughts about the book, he said that the part that really hit him in the gut was Anne's description of prisoner tapping codes–by which prisoners would tap on cell walls in specific patterns to make out letters to communicate with those in adjacent cells.

He described the code as Anne portrayed the Gulag prisoners using. And then he described the modification that he and his fellow prisoners used–the Cyrillic alphabet being somewhat different from our own. Then he paused and said that he still dreamed in that code sometimes.

I attended the Halifax Security conference with John McCain shortly after the 2016 election. We had a long talk about the President-elect, and he allowed as how the thing he could not forgive, and that would not allow him to support Trump, was the latter’s despicable attack on the Khan family, who had lost their son Captain Human Khan in Iraq. For my part, I knew that I would eternally despise Trump for having criticized John McCain for having been a prisoner of war, but that was neither here nor there.

As he got up to go off with the Congressional delegation I choked a bit, and said to him, “We will need you more than ever, sir.” He looked at me, and with that hard gleam in his eye, grabbed me by the upper arm, and said, “Keep writing, my friend.” He walked off a few steps, turned, and growled again, “Keep writing.” Which is one of the reasons I have, and will.

The John McCain I knew was a surprisingly serious guy. Not quite an intellectual, but more a thoughtful person who paid attention to details. He was not a friend–he was a U.S. senator and I was a reporter, covering him mainly in his role as a senior member of the Armed Services Committee. But we were cordial. Once, on a flight back to the United States after a meeting of defense ministers and such in Germany, he stood in the galley of an Air Force jet carrying the congressional delegation and talked for an hour with me about defense policies and people. If he were elected president, he said, he'd want Colin Powell to be his secretary of State. Likewise, before some Senate hearing on a subject I’ve now forgotten, he strolled over and talked with great enthusiasm to me and an AP reporter about a book he was reading on the Boer War. Before another hearing, we were talking about books and I mentioned that I was reading Admiral Stockdale's memoirs, and was struck by his philosophical approach to his torturers. McCain shrugged said something like, “I just thought of it as a boxing match that lasted for years.”

As I was walking around his table toward the exit, he interrupted his supporters, caught my arm, pointed to my KIA bracelet, and looking me in the eye asked, “Who do you wear that for?” I proceeded to tell him about my best friend in the Marine Corps, Ronnie Winchester, and how he was killed in Anbar Province in 2004, and what he meant to me.

McCain then pulled up his sleeve to reveal that he was wearing a bracelet of a young soldier who was killed in Anbar. He’d met his mom on the campaign trail and wore it as a reminder, not that he needed one, of his sacred obligation.